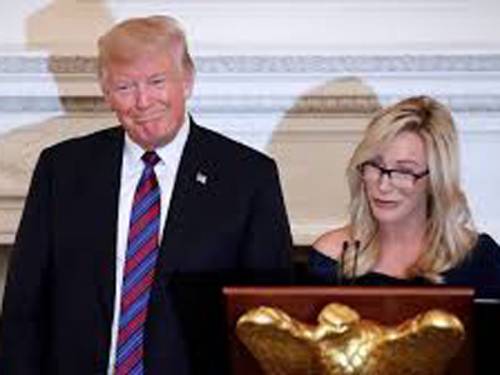 WASHINGTON — Paula White, a Pentecostal preacher and longtime adviser to President Donald Trump, has been tapped to head the White House’s Faith and Opportunity Initiative, a successor to previous administrations’ faith-based office that coordinates outreach to religious communities.

“Paula White is the Advisor to the (White House) Faith & Opportunity Initiative,” read a statement from the White House sent to Religion News Service. A White House spokesperson later said, “She is heading up that initiative.”

The news of White’s new role was first reported by The New York Times.

The appointment of the popular author and former pastor of a Florida megachurch, sometimes called “the Trump whisperer” for her closeness to the president, has been long anticipated. Two individuals who regularly engage with the federal government told RNS earlier this year that a federal official explained to them that the Florida pastor was expected to head the agency. The individuals did not want their identities revealed out of concern of reprisal.

Americans United for Separation of Church and State was quick to denounce White’s appointment on Friday.

“Televangelist Paula White is unfit to serve in the position of advisor to the White House Faith and Opportunity Initiative,” read a statement from Americans United President Rachel Laser. “She has no experience in government or public service and no history of undertaking the kind of interfaith outreach necessary for this role. Instead, she has operated in the shadows to influence public policies that discriminate against women, LGBTQ people and religious minorities, and the nomination of partisan judges who will support those harmful policies.”

She added: “This appointment is yet another example of President Trump pandering to his evangelical Christian supporters as he scrambles to secure his base amidst an impeachment investigation.”

White prayed at a rally in June of this year when Trump announced his reelection bid, saying, “let every demonic network who has aligned itself against the purpose, against the calling of President Trump, let it be broken, let it be torn down in the name of Jesus!”

White was also at Trump’s side in May 2018 when he signed an executive order creating the Faith and Opportunity Initiative in a Rose Garden ceremony on the National Day of Prayer. At that ceremony, Trump called White “my good friend Paula White, who’s done such an incredible job” and asked her to stand from her seat in the audience.

In August 2018, during a meeting of what the White House called “inner city pastors,” White specifically mentioned an initiative when her turn came to introduce herself, saying to the president, “It’s an honor to serve you with our faith initiative and opportunity,” according to the White House transcript.

White has also been a member of Trump’s informal evangelical advisory board, a group of evangelical pastors who gather frequently at the White House — as recently as this week — to support the president and offer him advice.

The Faith and Opportunity Initiative is similar to the White House Office of Faith-Based and Neighborhood Partnerships that was created under President George W. Bush and continued under President Barack Obama under a slightly different name.

Melissa Rogers, who headed up that office under Obama, urged White and her new office to embrace three priorities.

“Form partnerships with faith-based and humanitarian organizations to serve people in need,” Rogers said. “Do so by partnering with organizations that reflect diverse faiths and beliefs. And do this work in a way that is consistent with the Constitution.”

She also stressed the need to maintain a “very strong bipartisan tradition of using these partnerships to serve people in need, and to do so with a wide variety of faith-based and neighborhood organizations.”

Under Trump, federal agencies and departments that do not currently have a center on faith-based issues are ordered to designate a liaison to the new office and coordinate with the adviser.

Trump’s executive order also called for all administration agencies to report to the attorney general concerns raised by religious and community groups about “any failures of the executive branch to comply with protections of Federal law for religious liberty.”

In the past, the director of the faith-based initiative has been involved with supporting national and cabinet-level efforts to partner with religious and community groups to address social needs, from fighting the Ebola virus to feeding hungry schoolchildren.

White stumped for Trump during his 2016 presidential campaign and has defended him throughout his presidency. In August 2017, she declared on the Jim Bakker show that Trump had been elevated to the presidency by God and that resisting him is akin to resisting “the hand of God.” She later said she regretted making those comments, but insisted Trump “is not a racist.”

In May 2018 she was one of several evangelical pastors to attend the dedication of the U.S. embassy in Jerusalem.

White has already been fulfilling many of the duties of her new role on a volunteer basis since the beginning of Trump’s term. Her website gives her credit for coordinating a July 2018 meeting of millennial evangelicals with top administration officials in conjunction with the White House Office of Public Liaison, saying, “Over the past 18 months Pastor Paula and OPL have brought in over 2,000 pastors and ministry leaders to the White House to have the voice of the faith community heard.”

White will have the support of many conservative evangelical leaders as she begins her formal role. “She would be the perfect fit,” the Rev. Samuel Rodriguez, president of the National Hispanic Christian Leadership Conference, said in an email when her name was mentioned for the office in February.

But White comes to her new position having survived repeated controversy. Her ministry was among six religious broadcasters investigated over three years by Sen. Charles Grassley, R-Iowa, for allegations of lavish spending. When the probe concluded in 2011, Grassley’s report said several former staffers of her Tampa megachurch wanted to speak to Grassley staff but “were afraid of being sued by the church.”

White has even proven controversial among her fellow conservative Christians. Often called a purveyor of the “prosperity gospel” — a theology that champions money as evidence of God’s blessings — she has drawn fire from conservative Christians such as Russell Moore and R. Albert Mohler Jr., who consider the theology heretical or a “false gospel.”

From 2012 until this spring, the charismatic minister — who like Trump is thrice-married — led New Destiny Christian Center, a predominantly black church in Apopka, Florida. She left, she said, in May to carry out an ambitious plan to found 3,000 churches. In 1991, she founded Without Walls International Church with her then husband Randy White. The church, which at one time boasted 20,000 members, filed for bankruptcy in 2012.

White, who did not attend seminary, will lead an office normally filled by experts with significant expertise in church-state, legal and political arenas.

In the Bush administration, John DiIulio, who has taught politics and religion at Princeton and University of Pennsylvania, was the office’s first director, followed by Jim Towey, a former lawyer for Mother Teresa, and Jay Hein, a think-tank president.

Joshua DuBois, a Pentecostal minister who worked for President Obama when he was a senator, served in the role before leaving it to Rogers, a laywoman known for her role in developing prominent religious freedom statutes.