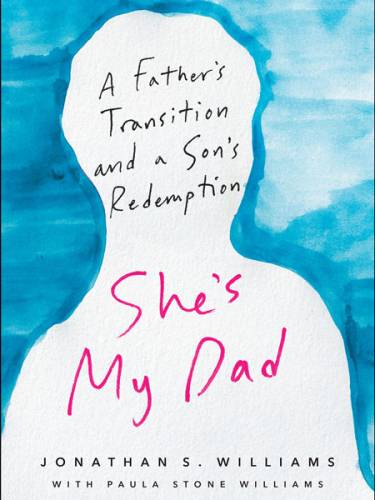 LOUISVILLE — After spending 60 years as a man, Paul Williams came out to his family as transgender, becoming Paula.

The married father of three was a prominent evangelical pastor before transitioning and recognized that transitioning would not be an easy process, personally or professionally. Nonetheless, “I’d been called [to transition], and you reject a call at your own peril,” Paula said.

Paula went on to cowrite a memoir detailing her family’s experience with her gender transition with her son, Jonathan S. Williams. “She’s My Dad: A Father’s Transition and a Son’s Redemption” was published in 2018 by Westminster John Knox Press. The duo went on to bring their message to the Ted Talk stage where their talk has been viewed nearly 1.5 million times.

Now they have explored their story with Jada Pinkett Smith, Willow Smith, and Adrienne “Gammy” Banfield-Norris on Red Table Talk. This popular web television talk show provides “a forum where the perspectives of three different generations on a wide variety of topics are shared.” Paula is joined by her son Jonathan and her youngest daughter Jana to discuss the effects of her transition on her family, transgender people in the church, and what life looks like once you lose your privilege as a straight, white male. (Paula’s first Ted Talk exploring privilege as a man and as a woman has been viewed nearly 2.5 million times.)

For youngest daughter Jana, Paula’s transition felt mostly like she had lost her father. But when she met her father as Paula for the first time, Jana said, “I was truly excited for her because I just could see that she was glowing. There was no chance that I could deny that this is who she is.” Paula’s oldest daughter, Jael, who was adopted from Calcutta as an infant, empathized and accepted Paula immediately due to her own experience of marginalization.

For Jonathan, Paul becoming Paula felt like he’d lost his North star, the person he’d looked up to his entire life. This felt especially true since Jonathan had followed in Paul’s footsteps, becoming an evangelical pastor who had been put in charge of a new church plant only three months before. Jonathan feared losing funding or being fired from his position if he were to publicly affirm Paula’s transition. Paula had already seen her fears come true, losing all of her jobs in seven days. “I lost the church, most of my friends. I lost my pension. I lost everything,” she said. “In 21 states, you can’t be fired for being transgender. But in all 50, you can be fired if you’re transgender and you work for a religious corporation.” This week, the U.S. Supreme Court heard arguments over whether Title VII of the Civil Rights Act of 1964 covers sexual orientation and transgender status.

Jonathan wrestled with what to do. “Do I continue to hold on to privilege and power? Or do I support my dad and thousands like her?” Ultimately, he could not head a church that did not outwardly include and affirm LGBTQ people. He is now Lead Pastor of Forefront Church NYC, an open and affirming church. Paula has started her own inclusive church in Colorado.

“It’s so beautiful to know both sides,” said Willow Smith, speaking of Paula’s experience as Paul and now as Paula. The table spoke of the need for better language to describe gender transition and what a family goes through when a loved one transitions. “It takes a new skill to figure out how to gracefully transition a family and a community,” said Jada.

Watch their entire talk in the episode “Living Your Truth: A Transgender Pastor Speaks Out” on “Red Table Talk.”