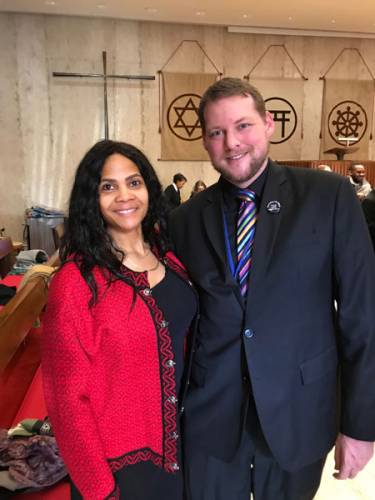 LOUISVILLE — As Sharon Gibbons learns more about the challenges women face around the world, it swells her support for women abroad and motivates her to work harder for gender justice closer to home.

The concerns of global women are at center stage every year at the United Nations Commission on the Status of Women (UNCSW) meeting, and Gibbons was a member of the Presbyterian delegation that participated in the gathering in 2015 and 2018.  She returned home to Eagle River, Alaska, carrying stories of sadness and hope and a heightened commitment to helping women in her community.

“I would like to start a nonprofit organization that is dedicated to the empowerment of women, and that is a direct result from being at the United Nations and being encouraged to do this work in our own communities,” she said.

At the UN, her heart was broken when she heard about girls in South Asia who have little or no educational opportunities, women in Western Europe who are trapped in sex trafficking, and women in Africa who are being massacred in civil conflicts.  At the same time, she was encouraged by stories from women who are promoting STEM education, sustainable gardening and clean water access.

“My faith and my experience have absolutely inspired me to go out and make a difference,” she said.

Every year Presbyterian delegates join with ecumenical partners to advocate for justice for global women at the meeting of the UNCSW. The Presbyterian Ministry at the United Nations has coordinated the church’s participation in the UNCSW meeting for many years.  The UN ministry is supported by gifts to the Peace & Global Witness Offering. Most congregations received this offering on Oct. 6, which was World Communion Sunday.

In 2019, Presbyterian Women, which works alongside PMUN in facilitating Presbyterian involvement at the Commission, gained accreditation as a non-governmental organization at the UN.

At the UNCSW meetings, Gibbons’ longstanding desire to work for positive change was energized. This deep yearning to make a difference prompted her plan to return to school in middle age.  Gibbons gave up her job as resource coordinator and legal assistant in Alaska’s Federal Public Defender’s Office to prepare for law school. She will take the law school admission exam this fall and has her eye set on a legal career in public policy work after graduation.

She dreams of a judicial system that can identify family systems where domestic violence exists and address it. “If you are not aware of what to look for in domestic violence, you will miss it every time,” she said.

While working for the public defender’s office, she became concerned about the high recidivism rates of its clients. She was put in charge of a new program to help clients transition from correctional facilities back into society.

She connected clients with agencies that could help them find clothing, housing, and job training and placement. “Whatever resources that Anchorage had to offer it was my job to help them obtain those resources and be able to transition back into society.”

Many of her clients at some point had been subject to domestic abuse.  While they found counseling programs for abuse survivors helpful, they also appreciated the personal support she and her colleagues gave them. “I believe lives were changed because a relationship was established, and they were no longer just a number,” she said. “They knew they had support.”

Gibbons, who raised five children as a single mother, is an abuse survivor and knows the toll that abuse can exact from individuals. “I was broken and wounded and didn’t know who I was, and I was a commodity to a man who didn’t know who he was,” she said. “He, too, was also broken and a product of domestic violence.”

She was in a tumultuous situation and did not know how to escape. “Then God’s mercy and grace picked me up and took me out of the situation and now God is cleansing me of all the brokenness and has given me compassion for all people, not just women and children, but all people.”

Part of her deliverance included shedding the timidity that her abusive relationship had thrust upon her.  She said participating in the 2015 UNCSW meeting helped her overcome her shyness and gain confidence.  After the meeting, she ran to represent the Chugiak-Eagle River area on the Anchorage Assembly.

While she lost the election, she was pleased with the 42 percent of the vote that she received as a political newcomer, and she pursued community leadership in other venues. She chairs the Eagle River Community Council and is a delegate to Anchorage’s Federation of Community Councils.

Gibbons is grateful that her denomination encourages civic involvement and political engagement that reaches to the international level.  She said her own participation in her church’s work at the United Nations was greatly helped by a knowledgeable PMUN staff.

“They told us what to expect and they were right there with us and just encouraged us by emphasizing that what we have to say makes a difference,” she said. “It was very life changing.”

To support the work of the Presbyterian Ministry at the United Nations and other ministries that benefit from the Peace & Global Witness Offering, click here.