Dr. Brian K. Blount gets NEXT Church attendees on their feet with rock-solid preaching 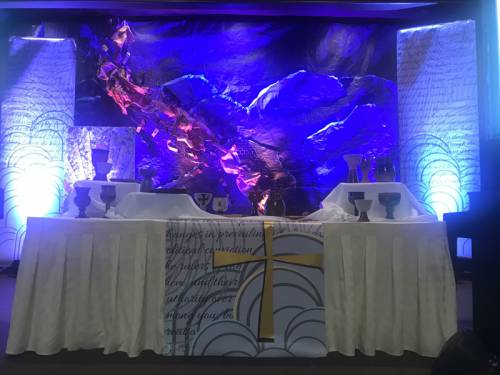 CINCINNATI — “This is our stone-cold moment to be like Jesus, our rock and our redeemer,” Dr. Brian K. Blount told the NEXT Church national gathering Wednesday at the close of a sermon as rousing as it was theologically well-built. The president and professor of New Testament at Union Presbyterian Seminary called on worshipers to “stand on God’s promise … and rock out our world.”

The scriptural theme for the three-day gathering was Joshua 4:1-9, where Joshua instructs 12 men to each carry a stone out of the Jordan River to the place where they were camping that evening. That way, when their children in time ask them “What do these stones mean to you?” they’ll be able to reply, “these stones shall be to the Israelites a memorial forever.”

Blount was also thinking of a more modern biblical reference to stones: Luke 19:28-40, Jesus’ triumphal entry into Jerusalem. At the end of the story, some of the Pharisees in the crowd tell Jesus to order the disciples to stop the people from praising God “joyfully with a loud voice for all the deeds of power that they had seen.” Jesus answers the Pharisees with these words: “I tell you, if these were silent, the stones would shout out.”

In this story, Jesus is a messianic, Jedi knight, according to Blount. “He knows there is a horse out there,” he said. “He also knows the person who owns it believes and will release the horse when the disciples tell him (Jesus) needs it.”

We may picture Jesus riding into Jerusalem with his “long flowing hair blowing in the wind, his tanned white skin and his piercing blue eyes, in spiritual meditation even as he bounces up and down,” Blount said. “He might as well be a float in the Macy’s Thanksgiving Day Parade, riding down the corridors of wealth and power. That’s what I saw when I was growing up,” he added, “and I still do today.”

After the parade, “after all the branches have been waved, the prayers prayed, the collection collected,” we “head to brunch on Palm Sunday, then and now,” Blount said — unless we live like, say, a campesino, a Latin American Indian farmer or farm laborer.

“For them it’s less pomp and circumstance, more meat and potatoes,” he said. “We don’t see what they see, because we aren’t meant to see what they see. We are meant to be blinded by our privilege of living safe, secure, spiritually successful lives. They see a passcode (in the Palm Sunday story), and what’s an adventure story without a good passcode?”

“Jesus can’t operate in the open, and neither can his people,” Blount said. They’re to go to the village and find a colt that’s never been ridden. Someone will ask, why are you untying it? “Do what I say in exactly the way I say it and you will end up here with the right horse,” Blount said of Jesus’ instructions. “There are people out there as determined to stop what you are doing as you are determined to do it.” If the wrong people get wind of the scheme, “they’ll do everything in their power to stop it. Jesus wants to make sure they can’t stop it. If they can’t identify the parade route, the parade horse and the parade’s grand marshal, the parade is more likely to parade on. That’s why (Jesus) needed a passcode.”

“What would it be like,” Blount wondered out loud, “if the next version of church is so engaged in revolutionary, liberating behavior that Christians who populated that church needed to use passwords so the people in charge couldn’t challenge the empowering until it was too late? What if worship was so dangerous you had to use a code to conduct it? What if the Eucharist was so egregious that you needed a safe word to get into a safe house to eat it?”

“By the time leaders catch on to what is happening with Jesus, it was already happening; people were proclaiming Jesus as Messiah,” Blount said. “They can’t stop the parade. The only alternative is to demand the parade be stopped by Jesus’ order, that Jesus order his people to stop proclaiming him as Messiah. It is at this point that Jesus declares that even if the people shut up, the rocks will cry out.”

“Jesus know that you can’t buy a rock or frighten a rock,” Blount said. “A rock does what a rock does. It sits there or it stands there, defiantly declaring its rockness.”

Joshua “certainly thought so,” he said. “Stones remember and stones speak.” And as Jesus said centuries later, “You can try to hide the truth, and you can refuse to tell the truth, but the stones will shout it out — to chasten you, to challenge you to become the you that God created you to be. They serve to remind you that how you took the land created a debt you can only repay one day by living more justly with those who you consider to be ‘other’ in the land.” 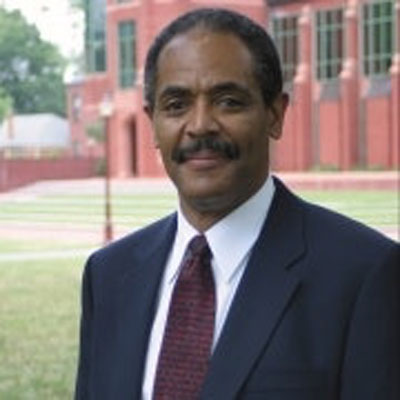 “The healing, liberating message of stone will hold more weight,” Blount said, “if we humans speak as clearly and as defiantly as a rock.”

“Can we Christians,” he asked, “who claim to follow Jesus all the way to Jerusalem and beyond speak as powerfully, shout as defiantly as a stone? Can we do that — can we be a stone-cold rumor of righteous revolution?”

“My wish for the Reformed church,” he said, “is that our theology would be a little less divine election and a little more human subscription … not a place of privilege, numbers, status and power. No one is about to stop us the way they tried to stop Jesus. We can walk into and out of our churches unhindered for the most part … No one needs a password to come into the church. The ushers are there giving you a bulletin, greeting you and welcoming you in and getting anyone who is on the street to come on in.”

“Jesus’ threat to us is if we don’t speak the radical, subversive, revolutionary, messianic message, the rocks will … He’s looking at us and saying, ‘Don’t you just sit there. He doesn’t say that to the rocks. Jesus knows the foundational, transformational, revolutionary power of stone.”

“Our church needs more rocks, broken, edgy, calm, smooth, large, cracked, whole, colored, whitewashed, buried in the dirt, lodged uncomfortably in our shoes, raised up on a pedestal, a platform upon which to stand,” Blount said, and his listeners were cheering by this point.

Later, he offered worshipers a simple benediction: “Go forth from this place — and rock,” Blount said.