Share God’s love with our neighbors-in-need around the world through One Great Hour of Sharing.
Make A Donation Click Here >
Home › Online show will offer Presbyterian spin on election night 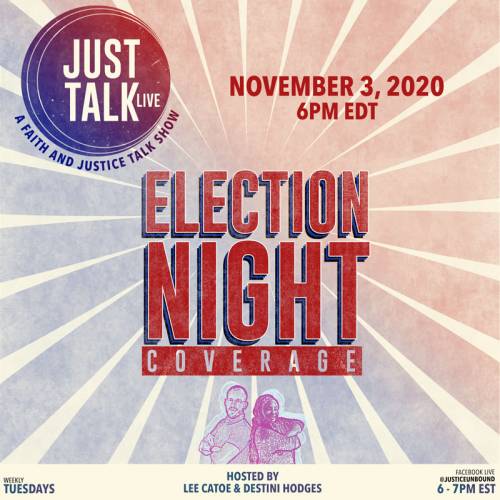 “Since this is a really big election, with a lot on the line, and a lot of it deals with morality and how our faith influences our decisions in the political sphere, we thought: what would it look like to offer people a different election experience — a faith-based experience that comes at the election from a theological framework?” said the Rev. Lee Catoe, managing editor of Unbound, the online Christian social justice journal, that produces “Just Talk Live” (JTL). Unbound is a publication of the Advisory Committee on Social Witness Policy.

Co-host Destini Hodges, Interim Coordinator for the Young Adult Volunteers, said rather than breathless, horse-race coverage of the results coming in, JTL will offer “a faith perspective intertwined with a political perspective, which is our civic duty as we believe as Christians, that we need to be involved.”

She said they plan to talk both about how people of faith have been involved in getting out the vote leading up to the election and how they can be part of reconciliation following a contentious race.

“Just Talk Live” premiered in early April as the first wave of the COVID-19 pandemic and stay-at-home directions set in, with the purpose of giving young adults interested in faith and justice issues a place to virtually gather. Since then, the show has grown in virtually every way, regularly attracting more than 1,000 viewers for episodes featuring Presbyterian guests such as the Rev. Dr. J. Herbert Nelson, II, Stated Clerk of the General Assembly of the Presbyterian Church (U.S.A.) to guests from other walks of faith life with insight into issues of the day. 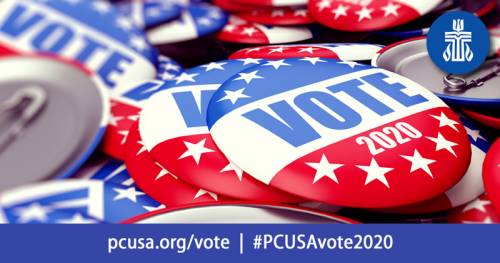 As they get ready to host their election special, Catoe and Hodges are in the process of several transitions, including launching a YouTube Channel for the show and making it a podcast. Catoe says the show will go on hiatus from mid-December to mid-January, during which time people can catch up with its more than 30 episodes on podcast, and then it will return with some tweaks.

One tweak the hosts had hoped to make with the election episode was hosting from the same location for the first time. But a recent spike in COVID-19 cases in Nashville, where Catoe is based, have the hosts rethinking that plan.

Hodges, who served on the city council in her hometown of Harrisburg, Pennsylvania, said this year will be different for her because on election night she is used to being at events with mostly people older than she is. Though she will not be at an in-person event, she said she is looking forward to being part of the virtual, young adult-focused gathering.

The duo is still working on the guest list and plans for the evening, saying they are not sure how late they will go, especially considering most experts say it is unlikely a winner of the presidential race will be named on election night, due to the high volume of mail-in voting because of the coronavirus pandemic. Some key states such as Pennsylvania have rules prohibiting election workers from counting mail-in ballots until Election Day.

The evening will start with the return of a young adult roundtable JTL coordinated with 224th General Assembly co-moderators Elona Street-Stewart and the Rev. Gregory Bentley for the Presbyterian Week of Action in late August to talk about the major election issues for people of faith. They also plan to bring back familiar guests such as Robin Kimbrough Hayes, who is an ordained elder in the Methodist Church and was a candidate in the Tennessee Democratic primary for U.S. Senate. Other guests will be announced before the show on the Unbound Facebook page.

Hodges notes that instead of pundits and party bigwigs, JTL viewers will hear more from organizers and volunteers in the trenches of the election — “a different perspective completely,” she says.

As representatives of the PC(USA), Catoe and Hodges do not publicly favor candidates,  but some of their guests probably will. As the nation transitions from the fever-pitch run-up to the election to an outcome that will inevitably leave some people distraught and angry, the hosts say it will be important for them to talk about healing and moving forward.

“After the fact, no matter which way it goes, there’s going to be a lot of backlash,” Catoe said. “How do we continue conversations, and what’s next? White supremacy will not be over after the election. Racism isn’t over. We still have a lot of work to do after this decision.”

“Just Talk Live” shows at 6 p.m. Eastern Time on Tuesdays on the Facebook page of Unbound: An Interactive Journal of Christian Social Justice. For an index of previous episodes, click here.