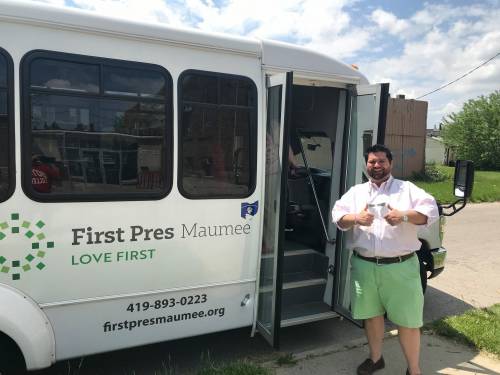 Baby U bus driver John Sluhan stand with a bus that First Presbyterian Church of Maumee, Ohio, uses for the program. (Contributed photo)

LOUISVILLE — Jack Hemple grew up at Westminster Presbyterian Church in Toledo, Ohio. His parents were married there. He was baptized there.

“I remember being there a lot as a kid,” Hemple said, adding that back then his mother loved to knit.

“She was always knitting. She had a specific hat pattern that she used and she’d knit hats and give them to the church,” he remembered.

But in the late 1980s, a lack of support caused the church to close.

Though the church building is still standing — another church has since moved in — the area it’s in has become impoverished, with about 40 percent of residents lacking a high school education and about 50 percent living in poverty.

Hemple is now a member of First Presbyterian Church in Maumee, Ohio, a suburb of Toledo, about seven miles from Westminster’s former location. But the bonds to his former neighborhood are still strong — as are those of several other First members who used to be part of the Westminster congregation — and still active, thanks to a commitment made by the congregation at First.

The suburban church has partnered with an urban Toledo mission, Mosaic Ministries, that’s working to eradicate poverty and lack of education in south Toledo near where Westminster Presbyterian was located.

The Presbyterian Foundation’s online giving program has been a key part of bolstering First Presbyterian’s commitment to the community.

“We’d been using online giving for several years, mostly because our young people were asking for it,” said the Rev. Clint Tolbert, senior pastor at First Presbyterian in Maumee. Tolbert added that the church decided to add a mission component to its online giving program to support the Mosaic project.

“It was especially effective because it worked hand in hand with information about the commitment to the mission which was publicized on social media,” he said.

Mosaic Ministries plans to open a kindergarten through sixth-grade school geared toward low-income families. It has partnered with SunBridge, a public charter school in Toledo, and hopes to open the school by 2022. 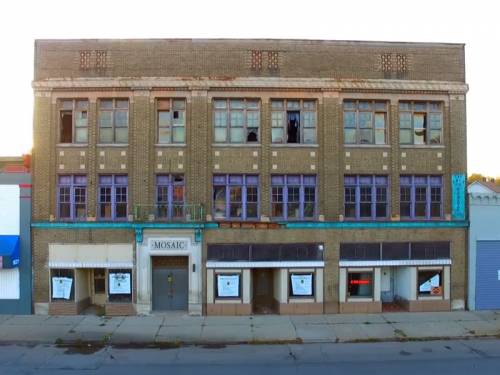 The Mosaic Lodge building will require a lot of renovation to work as a home for the Toledo nonprofit organization. (Contributed photo)

The ministry purchased a building several years ago that it plans to now use for its offices and the school.

“They got the building for next to nothing,” Tolbert said. “That should tell you something about its condition.  It was a shell of a building needing a complete overall.”

“For the past few years, they’ve been trying to improve the building in small ways in the hopes of using it for school/ministry. However, now that they have a partner (SunBridge) they are shifting into a significantly higher gear … not only completing the renovation of the original building but obtaining an abandoned building next door and including that space in the renovation plans as well.”

“Once all the renovation is complete, which will take a few years, the building will house both the school and ministry initiatives for Mosaic Ministries and SunBridge Schools,” he said.

The cost to get the building in working order to open the school is around $6 million.

First Presbyterian Church committed to providing $300,000 with a two-for-one match through its endowment, meaning members had to donate $100,000 for the $300,000 to become a reality. Many members and friends used the Foundation’s online giving program to contribute.

Hear the need, meet the need

The relationship between Mosaic Ministries and the church started as many do. Church members learned of a need and answered it. They volunteered to serve meals. They donated clothing. They helped renovate housing. A group from the church has taken on the knitted hat project, calling it “Pat’s Hats” after Hemple’s late mother. Hundreds of knitted hats have been donated to Mosaic.

“They’re really involved with us,” said David Kaiser, pastor of Mosaic Ministries. Kaiser built a relationship with First through his friendship with Tolbert.

Eventually, Kaiser spoke to a men’s breakfast group and a congregational meeting and shared some stories about Mosaic Ministries. About a dozen churches support Mosaic — although none like First Presbyterian, said Kaiser.

“When you hear the stories and see the conditions, you can’t help but feel the urge to assist in some manner,” said First Presbyterian member Mary Siefke.

While Kaiser and his team know that food, clothing and housing are vital in caring for those in need, it’s not enough. “Evidence-based programs are what drive us,” Kaiser explained, adding that Mosaic Ministries patterns itself after the Harlem Children’s Zone in New York City’s upper Manhattan.

Harlem Children’s Zone is a nonprofit that’s committed to ending generational poverty in Harlem. The program focuses on the social and educational development of children with the ultimate goal of giving children the support they need to get through college and become self-sustaining adults.

Mosaic Ministries has a similar scope, but with a faith component. “We desire to be a place where people are ministered to spiritually,” its website states. “We don’t want religious people but rather men and women in a lifelong love relationship with Jesus Christ.”

Baby University, a non-profit program for children up to age 3, started in 2010 at Mosaic. It strives to teach parents good life skills, parenting strategies and good nutrition. First Presbyterian’s Siefke is the treasurer at Baby U.

First Presbyterian members use the church bus to pick up parents and take them to Baby U.

Eventually, children in the area move into a quality preschool where they can become prepared for elementary education.

That’s where First Presbyterian Church has played its biggest role.

“We see ourselves as a catalyst in the community,” said Tolbert, who estimates that 50 percent of his congregation is involved with Mosaic. “We want to leverage our endowment to really make change.”

Hemple, who is a board member on Mosaic, said planning for the school is “a huge task. It has been messy and scary. But we keep working through it and we know that what we’re trying to do is best for the neighborhood and the kids in the area. It’ll happen when God plans for it to.”

While the partnership has helped Mosaic Ministries, it has also benefitted First Presbyterian Church, said Siefke.

“Raising money and assisting with the ministry has brought our congregation closer as we have prayed, given, worked and celebrated together for a common cause,” she said. “It has allowed us to live into our Christian values and the mission of our church, which is ‘Love First.’”

Sally Scherer is a writer and communications consultant based in Lexington, Kentucky. She is a member of Second Presbyterian Church, where she is an elder and a member of the choir.