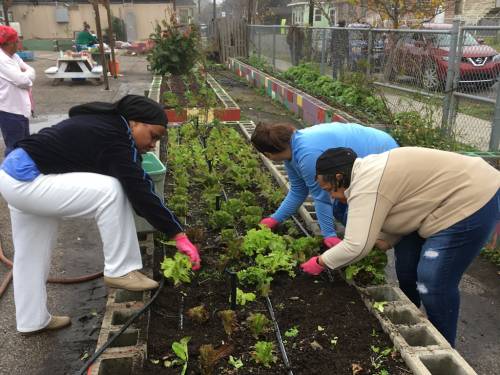 ST. PETE BEACH, Fla. – Layne and Crawford Brubaker have taken church planting to the next level. Quite literally.

With Okra Abbey, a new worshiping community (NWC) located in the Pigeon Town neighborhood of New Orleans, the Brubakers, together with ministry colleague, Vincent Grossi, are more than just blooming where they’re planted—they’re cultivating community by growing not only vegetables, but also by nurturing faith and trust among their diverse neighbors.

And at the heart of their fledgling growth initiative stands a garden—reminiscent, not coincidentally, of another creation story.

“I’ve been working with this garden and have been a part of the committee that cares for it the entire time I’ve been the New Orleans Young Adult Volunteer (YAV) site coordinator,” said the Rev. Layne Brubaker, who began serving there five years ago.

The New Orleans YAV site is one of 15 national and 6 international sites for the Presbyterian Mission Agency’s Young Adult Volunteer (YAV) program, a one-year service opportunity for young adults aged 19–30. At the New Orleans site, the JW Johnson Community School Yard Garden is one of eight available placements for the YAVs who apply to serve there.

“The neighborhood and the space kind of captured my heart,” she continued, “and while there were lots of opportunities to just give up on the garden and its future, I have always had an imagination.” 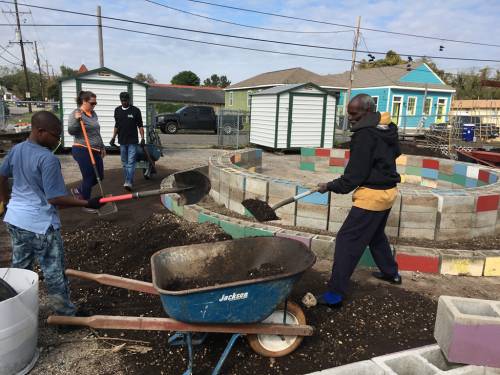 At the Okra Abbey, work and worship are intimately connected. This is worship in action as the abbey prepares for a neighborhood Christmas party. (Photo by Crawford Brubaker)

So she and her husband Crawford—who met while earning their M.Div. and Th.M. degrees at Princeton Theological Seminary—brought their imagination, energy, and passion to “Go Disciple Live,” a conference sponsored last August by the Presbyterian Mission Agency’s 1001 New Worshiping Communities movement to get the conversation started.

“Even before that, though, we had already started pursuing the idea of becoming a new worshiping community,” said Layne Brubaker. “I knew about 1001, and hidden in the back of my heart has always been the desire to be a part of a new church development. In hindsight, I could see that I started pulling these things together—a great space, a cool idea, and the Holy Spirit working in it. I felt like I could get the support to go forward with it, so we began talking to Sara Hayden [a 1001 NWC coach] and we also put in an application for a seed grant.”

The NWC one-time Seed Grant provides up to $7,500 for the first year of ministry to help start a 1001 community, for which the clergy couple was now more than ready, especially Crawford Brubaker.

“I think it was God’s sovereignty working out that Crawford was kind of stepping away from hospice chaplaincy and his work at that time,” said Layne Brubaker. “He witnessed my caring for the garden and because he was interested in it, he had the time to jump into it full steam. My role was the instigator of the new worshiping community, and now Crawford and Vinnie are taking the reins.”

Both Crawford Brubaker and Grossi, who was formerly a YAV at the same site, freely acknowledge the importance of starting small and being consistent. 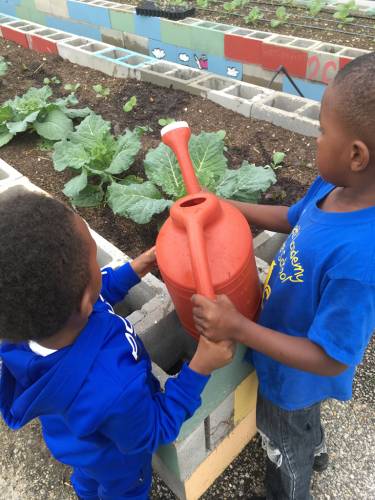 Children work in the garden at Okra Abbey ‘One plants, another waters, and God gives the growth.’ (1 Cor. 3:6 paraphrase) (Photo by Crawford Brubaker)

“We started in September by offering one meal on Wednesdays at noon called ‘Grace & Greens,’” said Crawford Brubaker. “Sometimes up to 20 people come from a 6-block radius from around the garden.”

The Okra Abbey sees itself as an “urban abbey,” unlike more conventional abbeys that are set far apart from the people.

“But still in abbeys, you picture the monks doing work all day, and their work is part of their worship,” Crawford Brubaker said. “So when people ask us, ‘When do you guys have worship,’ we say every day—when we’re moving the dirt in wheelbarrows and when we’re planting the seeds and picking the weeds, this is all worship, as we start our day with prayer and we end our day with prayer.”

Historically abbeys are places and spaces that are often self-sufficient while using any abundance of produce or skill to provide care to the poor and needy, refuge to those who are outcast or persecuted, and education to the young.

“We chose to call it Okra Abbey because okra is a beloved vegetable in New Orleans,” he continued. “It serves as the base of gumbo and thus in the title of our worshiping community is a nod to the particularities of our context. If we were in Nebraska, we’d probably be ‘Corn Cloister.’”

The Brubakers, who were here in St. Pete Beach from January 16-19 to attend the Presbyterian Mission Agency’s 2017 Disciple-Making Church Conference titled Abide in Me… A Spiritual Purging, said that Crawford Brubaker and Grossi planned to start a second ministry upon their return to New Orleans, “Peas & Love.”

“We have these great bags that we made with the ‘Peas & Love’ logo and we’re going to fill them with vegetables and take them to homebound folks in the neighborhood,” Crawford Brubaker said. “We’ll start with maybe three or four people.”

A typical day for Crawford Brubaker and Grossi may be spent moving rocks, moving dirt, and giving water to the people who come by. 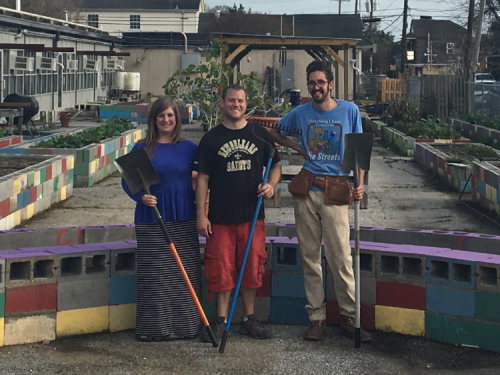 “Many abbeys served as way stations where travelers could stop in and rest and receive nourishment for their bodies and souls before continuing on their journey,” said Crawford Brubaker. “Since we’re directly across from the Corner Store where everybody walks to in the neighborhood, they inevitably pass by the garden and stop in.”

In addition to being Okra Abbey’s executive director, Crawford Brubaker calls himself its writer-in-residence and a brother. He said that he has been writing liturgy and is hoping someday to have an Okra Abbey Worship Book.

“At the end of February, we will be sharing what makes Okra Abbey unique with our presbytery, the Presbytery of South Louisiana,” he said, “and I am looking forward to sharing one of our favorite vegetable liturgies with them, “The Passing of the Peas.’”

Find Okra Abbey on Instagram at @okraabbey or email them at okraabbey@gmail.com.

The Young Adult Volunteer Program is made possible thanks to your gifts to the Pentecost Offering.