Christmas Joy Offering — support our leaders: past, present and future.
Make A Donation Click Here >
Home › Office of Public Witness calls on Presbyterians to participate in fall event in Washington

Church leaders to urge the passage of a faithful budget 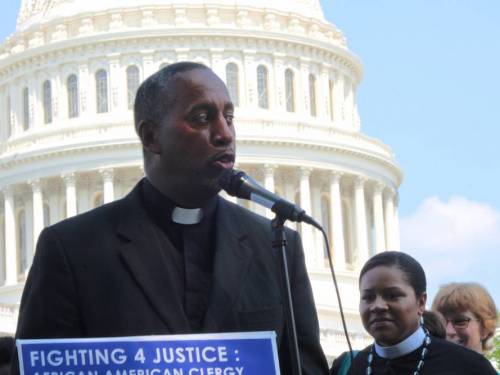 Jimmie Hawkins speaks during a recent news conference with African American clergy on the budget. (Photo by Ray Chen)

LOUISVILLE – The Presbyterian Mission Agency’s Office of Public Witness is calling on Presbyterians across the denomination to come to Washington D.C. this fall to speak out on the proposed federal budget. Church members, presbyteries and synods are being asked to gather on September 12 for a budget briefing, press conference and a visit to congressional offices.

“When I visit churches, I get a sense that people want to make a statement. There is a lot of frustration about the direction the country is headed and I sense that people want to come and make their voices heard,” said the Rev. Jimmie Hawkins, OPW director. “We are not coming to disrupt anything, but to engage. We are here for a positive purpose, to sit down and have dialogue about the things that concern and energize us.”

While the details are still being finalized, Hawkins says the day will begin with a 9:30 a.m. briefing, followed by a press conference and then two and a half hours of meetings at congressional offices. He says the day will end with worship.

“I’m hopeful for this event because we get encouragement from congressional representatives who say they want to hear from the faith community and that our presence does make a difference,” he said. “We need to state our direction and our values, but also encourage those who are wavering.”

Hawkins says he believes there are moderates on both sides of the political aisle who are not extremists, but are getting pressure from their own party to vote one way or the other.

“I was very encouraged by Sen. John McCain’s recent speech. It inspired me and was something that Congress needed to hear, that they need to do something more for the country,” he said. “I hope that this is the spirit in which we come, to talk about bipartisanship and encourage legislators to work together and find middle ground that is good for everyone.”

Nora Leccese, OPW’s associate for domestic poverty and environmental issues, says Presbyterians across the country are hungry for congressional action that will positively impact marginalized communities.

“Our goal is to have dialogue with congressional leaders as well as equip Presbyterians to go home and continue to build relationships with their members of congress,” she said. “Based on what we’ve seen the past six months; much more is required at the grassroots level. We have met roadblocks with traditional advocacy methods, but we have seen high levels of engagement at town hall meetings, high volumes of phone calls to congressional offices and its been effective to get them moving on justice issues.”

Hawkins hopes the September gathering will kick off an ecumenical movement that will draw other Christian denominations in years to come. The OPW works with other denominations and ecumenical groups to host Ecumenical Advocacy Days each spring. He believes the fall event could become an annual extension of the spring gathering.

“We have a long history of advocacy and with a church presence in Washington, we want to continue that legacy and have some influence in the political direction the country is taking,” he said. “We want to make life better for people who are impoverished and protect as well as strengthen social programs that could be cut with a new budget.”