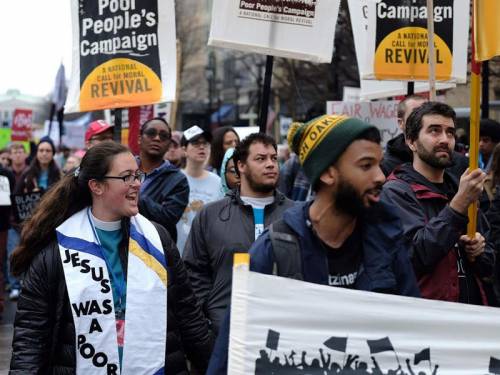 As co-founder of the Poor People’s Campaign, the Rev. Dr. Liz Theoharis, director of the Kairos Center, helped form a “Reading the Bible with the Poor Cohort.” Eventually this group of leaders — those who are poor, along with activists, theologians, biblical scholars and pastors, helped start Freedom Church of the Poor. Courtesy of Kairos Center

LOUISVILLE — The Rev. Dr. Liz Theoharis believes society has gotten comfortable with death — specifically with those who die from poverty.

And no one had the political will to anything about it.

As Theoharis began calling for building a movement for those who are poor, she was joined by the Rev. Dr. William J. Barber II. Together they cofounded the Poor People’s Campaign: A National Call for Moral Revival. As co-chair of the largest wave of nonviolent civil disobedience in 21st century America, Theoharis, ordained in the Presbyterian Church (U.S.A.), has emerged as one of the nation’s leading social movement forces.

As director of Kairos Center in New York City, which is one of the anchor organizations of the Poor People’s Campaign, Theoharis helped pull together a group of poor people and activists — along with theologians, Bible scholars and pastors. Together they began a Bible study called Reading the Bible with the Poor Cohort. Eventually, they helped form a new worshiping community called Freedom Church of the Poor.

“It’s place where we can challenge Christian nationalism that blames poor people for poverty and those who are estranged from God,” Theoharis said, “by pitting people against each other with the lie of scarcity.”

Made up of those who are who are multi-religious and non-religious, the worshiping became a spiritual home for those reinterpreting biblical passages that are often used against those who are poor. When the pandemic hit, they began worshiping, praying and reading the Bible together online on their Facebook page. Quickly, people from the networks of the Kairos Center and the Poor People’s Campaign and others began to join in. 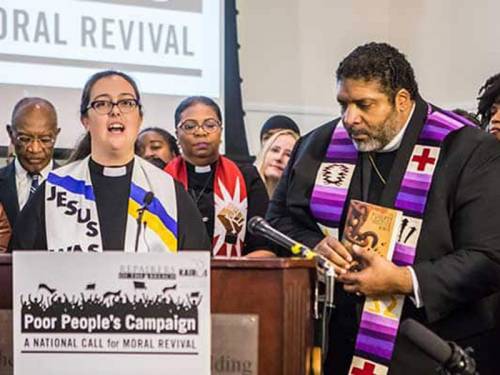 “We are a new unsettling force that is organizing poor people across all these lines that divide us,” Theoharis said, “with power potential to disrupt the complacency of our national lives.”

Central to the vision behind Theoharis’s work comes from the Rev. Dr. Martin Luther King Jr.’s life, who posited that the Achilles heel of our society was a system that brought together poverty, racism, militarism and ecological devastation.

According to Theoharis, there are 140 million Americans either living in poverty or are one paycheck away from economic ruin. That means that more than one-third of the U.S. electorate is in crisis, which she said, “is crazy.” As Theoharis began to explore who is most impacted, she discovered that demographically 60% of those 140 million are Black, Brown or Indigenous.

“COVID has exposed and spread the deep fissures that exist in our society,” she said.

Raised in a family committed to doing the work of justice and bringing God’s reign of justice to Earth, Theoharis now wants to struggle with the Presbyterian Church (U.S.A.) in determining what a Christian response to poverty must be.

“I was doing this organizing work before I realized it was a religious call,” she said. “A saying out of South Africa during their struggle with apartheid taught us that a dying mule kicks the hardest. But the arc of the universe bends towards justice.”

You can join the Freedom Church of the Poor for Sunday evening worship services on the Kairos Center Facebook page, which begin at 6 p.m. EDT — except for on the First Sunday of the month, which begins at 6:30 p.m. EDT.

Recently, Freedom Church of the Poor received a $10,000 seed grant from Mission Program Grants, which are made available through the Racial Equity & Women’s Intercultural Ministries of the Presbyterian Mission Agency. The grants support the transforming work of new worshiping communities and mid councils.