LOUISVILLE — During the Presbyterian Church (U.S.A)’s  #GivingTuesday 12-hour telethon on Dec. 1, the Rev. Nikki Collins, national coordinator for 1001 New Worshiping Communities, will visit with two  ‘1001’ leaders who started new churches among people and in places where traditional PC(USA) mainstream churches haven’t been.

In the “Making Church Accessible for All” conversation from 1:20 p.m. to 1:50 p.m. Eastern Time on Tuesday, Collins will host a conversation with the Rev. Dr. Bethany McKinney Fox of Beloved Everybody Community in Los Angeles and the Rev. Dr. Christopher Benek of  CHVRCH+, which is  a virtual reality platform for churches. The setting of first VR church community was designed after the First Miami Presbyterian Church building in Miami, Florida, where Benek is head of staff. 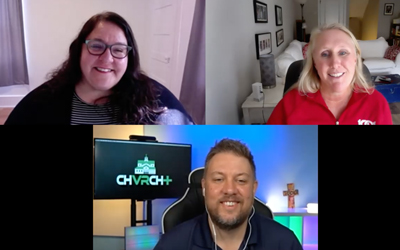 The Rev. Dr. Bethany McKinney Fox (back left) and the Rev. Dr. Christopher Benek (front) join the Rev. Nikki Collins on PC(USA) #GivingTuesday to celebrate ways their vision of God’s realm has been expanded by being with people and in places that are often excluded in mainstream churches. (Screen shot)

“They both do an outstanding job articulating theology and vision, along with what they learned in their communities,” Collins said, “and they challenge the larger church to consider ways they might be with new people — and in places they haven’t been — in their context.” 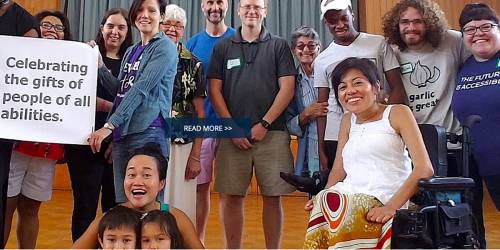 The Rev. Dr. Bethany McKinney Fox (far right) with members and friends of the Beloved Everybody Community in Los Angeles. (Contributed photo)

“So, it’s really integrated space where all kinds of different people are sharing faith, worshiping together, and sharing leadership with people whose gifts are not often recognized, or even seen,” she said. “We often as Christians think of people with disabilities as objects rather than as co-laborers in the gospel.”

For Benek, the results of having a CHVRCH+ fellowship in VR space have been “pretty astounding.” He said that people from six continents have joined their community of faith through virtual reality. Because there are so few churches in virtual space, where there are 2.2 billion gamers, initially people wondered if Benek was just “playing church.”

But once they started chatting with him and found out he was real pastor, they responded to messages they were hearing and began to engage in CHVRCH+ Bibles studies. From his current physical space in Miami, he projects and records the weekly Bible studies digitally on Twitch. In this mixed reality space, people can also see the virtual embodiment (avatars) allowing First Miami to connect with people at multiple levels of reality.

“We need more churches in the space, because people who are often disenfranchised need us,” he said. “Connecting to us virtually and then to our physical space has reinvigorated them to connect to a local congregation.” 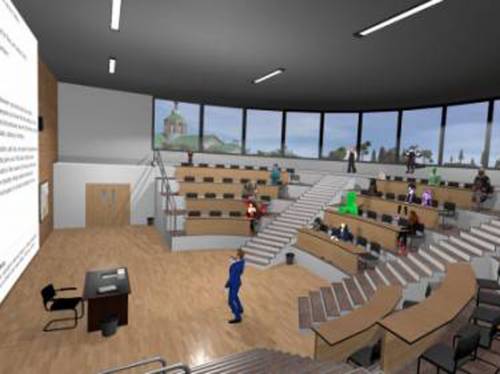 CHVRCH+ is the first virtual church fellowship on a virtual reality platform that will help church leaders advance their ministries in virtual spaces. (Contributed photo)

Benek said he had someone say to him recently, “Once COVID is over, I’d like to be baptized.”   But the person also had questions about how this might work. “I live in Europe and you are part of the PC(USA). I don’t live in the USA. What does that mean?”

“We have to have those conversations now,” Benek said. “Technology stretches our imaginations about who we’re called to be, who we are in the image of God and what our responsibility is.”

To find out more about how All Beloved Church and CHVRCH+ are engaging people who have traditionally have been excluded or invisible in the mainstream church, listen to the “Making Church Accessible for All” conversation on December 1 from 1:20 p.m. to 1:50 p.m. Eastern time. The schedule for the #GivingTuesday telethon is here.

#GivingTuesday will include numerous opportunities to celebrate PC(USA) ministries that support the Matthew 25 invitation. Along with the celebrations, there will be time for prayer, worship and reflection — and even a game show called “PresbySquares” with current and former General Assembly Moderators.

Downloadable graphics and suggested texts in support of #GivingTuesday are available by clicking here.

Join the PC(USA) in responding to a world in need! Give now.