The sky is not falling. Rather, the ground is shifting 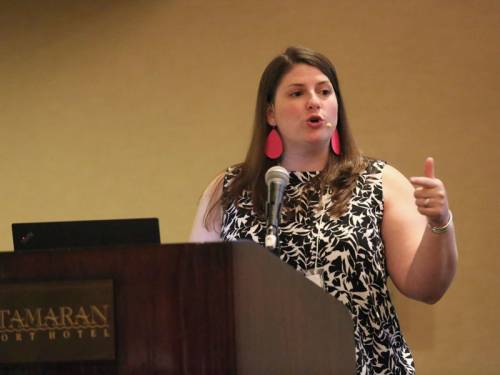 Melissa Spas of the Lake Institute presents during the opening plenary of Stewardship Kaleidoscope. (Photo by Erin Dunigan)

SAN DIEGO — A new study by the Lake Institute was recently released that delves into how American congregations “receive, manage and spend” financial resources.

Attendees at the annual Stewardship Kaleidoscope conference received a summary of these findings during the gathering’s opening plenary session, guided by Melissa Spas, Managing Director of Education and Engagement for the Lake Institute on Faith & Giving.

“For many people philanthropy has been reduced to a privileged domain of those with capacity,” Spas said. “I’d like us to reframe it as a gift of humankind.”

Stewardship Kaleidoscope is the annual conference on stewardship, generosity and giving. This year’s conference is being held at the Catamaran Resort Hotel in San Diego Sept. 30 through Oct. 3. More than 300 people are in attendance from the Presbyterian Church (U.S.A.) and the Evangelical Lutheran Church in America.

The National Study of Congregations’ Economic Practices (NSCEP) is the first comprehensive view of congregational giving in more than 30 years. Conducted in 2018, the study collected giving and demographic information from 1,231 congregations across mainline Protestant, evangelical Protestant, black Protestant, Roman Catholic and other religious groups.

While not directly related to congregational size, total giving showed some parallels in that most congregations (78 percent) received less than $500,000 in total income in 2017.

“There is a popular narrative about decline in American religion, and our study complicates that narrative because there are so many spaces in between [the data points],” said Spas.

As one example, she noted that 26 percent of congregations reported an increase in revenue and regular participating adults and 46 percent reported a decrease. At the same time, they also found that 22 percent of congregations reported increased revenue but fewer participants and 10 percent reported decreased revenue with an increase in participating adults.

In surveying how churches collect funds, the study shows 78 percent of giving is received during church services, including via digital means.

When Spas asked for a show of hands on how many participants’ congregations conducted an annual stewardship campaign, nearly every hand went up. Conversely, when asked which congregations did not, fewer than five were raised.

“Pledging is not the norm,” Spas said. “It is a particular behavior that may be helpful in some contexts. But it is not the only way churches continue to raise money and thrive.”

Spas said the Lake Institute is continuing to analyze these and other results from the study in order to provide more causal and qualitative conclusion from the data.

“I used to feel like Chicken Little — the sky is falling,” she said of other recent data on congregational giving. “But what I’m seeing is the ground has shifted beneath us. And that’s why we’re setting a new baseline for how congregations receive, manage and spend their financial resources.”