Nonprofit is a longtime partner of the Presbyterian Hunger Program 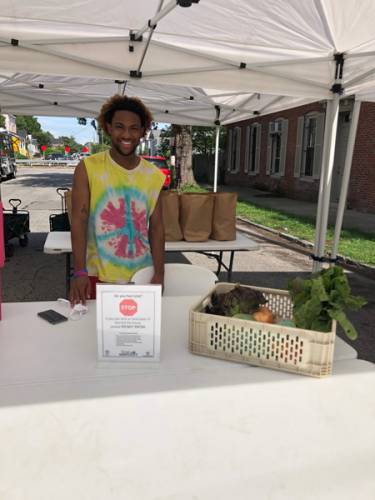 Demetrius Harrison is a New Roots shareholder who volunteers at the Fresh Stop Market in Louisville’s Shelby Park neighborhood. (Photo by New Roots)

LOUISVILLE — A nonprofit rooted in the idea that fresh food is a human right continues to make an impact in the Louisville and Southern Indiana area despite the pandemic.

New Roots, a longtime partner of the Presbyterian Hunger Program, is a food justice organization known for its eight Fresh Stop Markets, which pop up at churches, businesses and community centers.

Fresh Stop Markets help to improve access to healthy food, particularly in areas like west Louisville with limited shopping options, and promote the importance of eating better to avoid things like heart disease and obesity.

“We’re basically acting in a role of amplifying the message that we need to eat fruits and vegetables to stay happy and healthy,” said Karyn Moskowitz, the nonprofit’s executive director. “You don’t really hear that message amplified by many other entities.”

Every two weeks during the growing season, participants pick up a bounty of fresh, locally grown produce —known as a share — from their Fresh Stop Market. 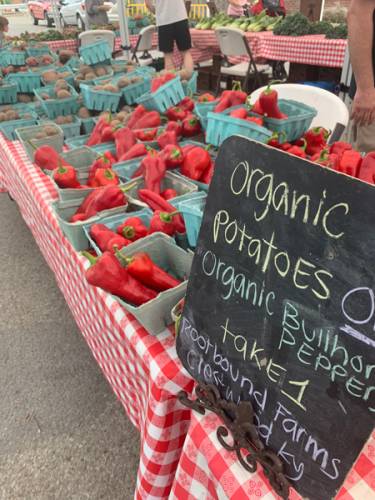 “It’s all organic and chemical-free vegetables,” said Moskowitz, who helped form New Roots about 10 years ago with a group of friends. “Our main initiative was the Fresh Stop Markets, from the beginning.”

The nonprofit also shares knowledge through blog postings, recipes and events such as food justice workshops, though some of that has been temporarily curtailed due to the pandemic.

“It’s not only food access that we work on,” Moskowitz said. “We also work on sharing knowledge about how to incorporate all these beautiful vegetables and fruit into our daily life.”

One of the sources of that produce is Rootbound Farm, which is operated by Bree Pearsall and her husband, Ben Abell, in neighboring Oldham County.

“New Roots is one of the ways we’re able to get food to people outside of the industrial food model of grocery stores,” Pearsall said.

Participants sign up for a full season — about five months of biweekly pickups — so when Rootbound is planning and planting, “we do know that those families are going to be there … from May through October to get their Fresh Stop (Market) share,” she said, noting that consistency is important. 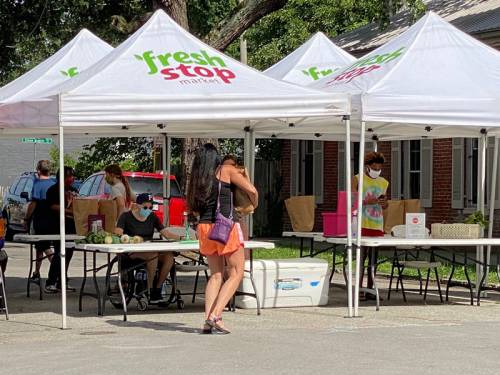 New Roots has eight Fresh Stop Markets, including this one in the Louisville neighborhood of Shelby Park. (Photo by Darla Carter)

Before the pandemic, participants were able to interact with individuals who stood behind the produce tables at the Fresh Stop Markets, sharing knowledge such as how to cook and store the items. There also were cooking demonstrations onsite. But interaction has become more limited due to the need for social distancing and masks.

Some of the cost is subsidized by grants from various organizations.

In Kentucky, recipients of the Supplemental Nutrition Assistance Program (SNAP) pay $6 per share thanks to a grant through the Community Farm Alliance and U.S. Department of Agriculture. “They match $3 for every $6 a family on SNAP puts in the pot and then we raise $3,” Moskowitz said. There is a similar arrangement in Indiana made possible by a grant from the Floyd Memorial Foundation.

Shareholders with limited income but no SNAP benefits pay $12.75 a share and those with higher incomes pay up to $43, which is known as a Food Justice Share.

Those Food Justice Share recipients are “putting more money in the pot … so it makes the movement more sustainable,” Moskowitz said. “Everybody gets the same food no matter what you pay.”

The Presbyterian Hunger Program was one of the first institutional funders of New Roots and also provided assistance early on through volunteers from the AmeriCorps VISTA service program.

“We saw them (New Roots) as perhaps the best model in the whole country for bringing fresh, healthy food to food-apartheid communities,” said Andrew Kang Bartlett, PHP’s associate for national hunger concerns and a former New Roots board member.

New Roots “really needed to create a parallel food system, starting at the farm all the way to the consumer, including every step along the way, from harvesting the food to getting it to those specialized markets … in Louisville and then in other places, and doing it with a very inclusive and sensitive approach to the needs of the communities, to the history of initiatives that tried to improve the food situation in low-income communities and making sure that the beneficiaries were at the helm and making the decisions about what that food system would look like,” he said.

Through consulting and listening, New Roots’ reach now extends overseas and around the country as communities look to the nonprofit as a model, Moskowitz said. “We speak on behalf of food justice all over the world.” 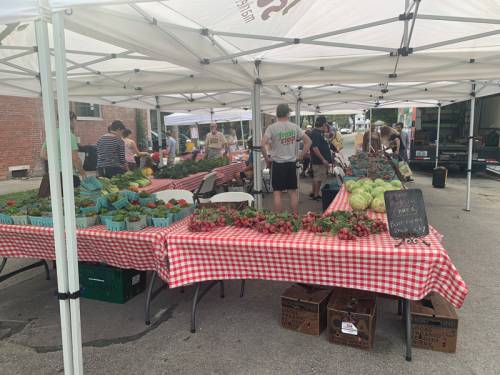 A Fresh Stop Market before the pandemic necessitated changes, such as social distancing and masks. Produce is now bagged for pickup. (Photo by Presbyterian Hunger Program)

Locally, Moskowitz has seen New Roots have a positive impact on participants’ health and lifestyles.

Current shareholders include Demetrius Harrison, 21, of Louisville, who is in his second year with New Roots.

“I’ve learned that you can really do anything with vegetables and they make you feel good,” said Harrison, who loves making homemade kale chips. “These days, I don’t really even prefer to eat meat.”

After becoming a shareholder last year, Harrison decided to become a volunteer and now serves as a leader helping participants to check people in at the Fresh Stop Market in his former Louisville neighborhood, Shelby Park.

The markets help to create a sense of community, said Harrison, who noted that people tell him about their backgrounds and their motivation for wanting to eat more vegetables. “I really get to know them, which is nice,” he said.

Rootbound Farm, about 30 minutes northeast of Louisville, has been working with New Roots for about five years.

“They’re really a critical link between farmers who would like to be able to provide our farm products to families of all income levels, and the families that need it the most,” she said. 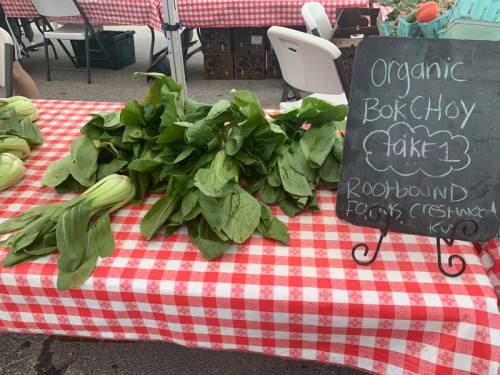 Demand for Rootbound’s farm-fresh products has been strong during the pandemic and not just among New Roots families, she said.

In general, “I think people are thinking more about their health and the ways that their diet contributes to health” — and they’re cooking at home more, she said.

Also, “I think people have seen some of the exposed weaknesses of the food system,” from slaughterhouses having to be shut down because of COVID-19 to grocery store shelves going bare and some grocery stores having to close, Pearsall said.

“I think people are looking for alternatives that are more responsive and locally based,” she said.

The Presbyterian Hunger Program is supported by your gifts to One Great Hour of Sharing.