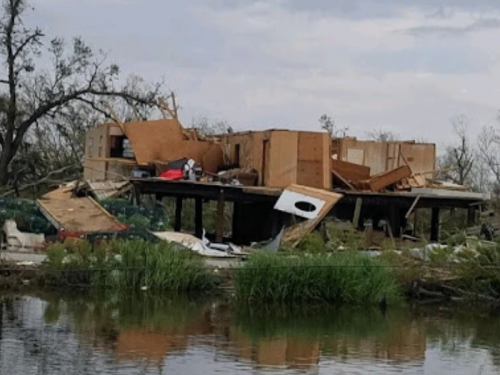 Ida was a category 4 storm with 150-mile-an hour-winds, the second-most damaging and intense hurricane to make landfall in Louisiana on record, behind only Hurricane Katrina in 2005. 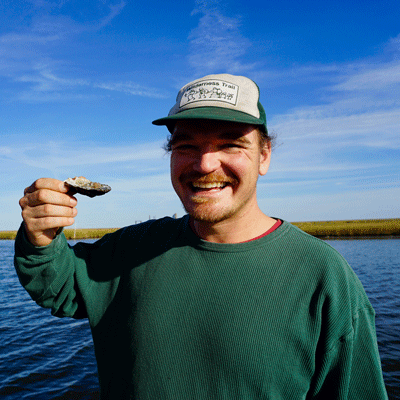 Dan Lang is the New Orleans site coordinator for the YAV program. (Photo by Ashtyn Bratt)

Both in 2018 and again in 2019, the Dardars welcomed YAVs to the Pointe-au- Chien Indian Tribe Community Center and took them on a boat tour, introducing them to their ancestral land and daily life.  The YAVs were shown the connections between New Orleans and the surrounding bayous. What they saw were decades-long land loss and continued environmental and economic threats to their own community and neighboring tribal nations.

After Ida’s landfall, Lang spoke with Theresa Dardar about the impact on the community, also coordinating with Richard Williams, general presbyter of the Presbytery of South Louisiana. He also reached out to YAV alumni by text, explaining Hurricane Ida’s impact along the bayous south of New Orleans. Within hours, YAV alumni sent money along with prayers and words of encouragement. 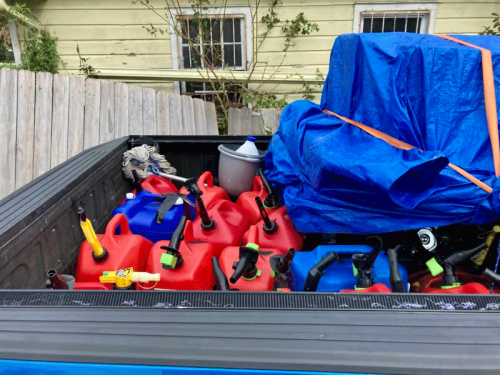 Earlier this month, Dan Lang drove a truck packed with YAV donations to the Pointe-au-Chien Tribe in Terrebonne Parish. (Photo by Julia Lang)

On Sept. 8, Lang traveled to Pointe-au-Chien with partner Julia Lang, delivering 90 gallons of fuel, a generator, two window air-conditioning units from the YAV House, some cleaning supplies, and 150 lunches from Feed the Second Line NOLA, another mutual aid group the Langs had  volunteered with after Hurricane Ida.

The 2021-22 YAV class will visit Pointe-au-Chien on Oct. 9 for a community day to participate in mutual aid and relief efforts. They will delay their traditional boat tour until next spring.

The Pointe-au-Chien Indian Tribal Community is located in Terrebonne Parish. They are believed to be descendants of the Acolapissa, Atakapas, and Biloxi Indians. The Tribe has about 850 French-speaking members. 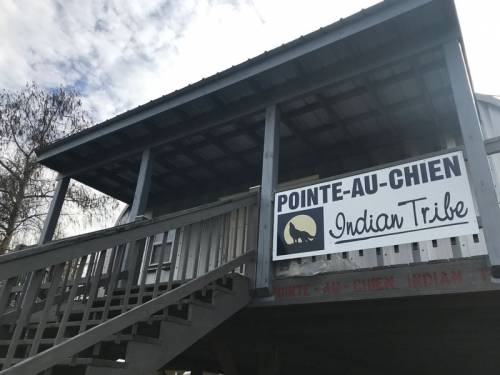 The Pointe-au-Chien Tribe has about 850 French-speaking members. (Photo by Mike Ferguson)

The Pointe-au-Chien are caretakers of an area continuously inhabited by indigenous tribes of South Louisiana and descend from tribes historical to Louisiana and the Mississippi River Valley. They describe themselves as “a distinct community despite colonization, land loss, lack of status as a federally recognized tribe, exploitation of the land and people, and denial of educational opportunities. The perseverance, ability to adapt, humility, and cultural knowledge of its people have sustained the Tribe.”

Their website details that under policies in place by the State of Louisiana and United States government, Pointe-au-Chien students were prohibited from attending high school until the late 1960s and early 1970s. “These policies have had a direct impact on the ability of tribal members and the Tribe to advance in areas of education, economics and healthcare,” it says.

The Tribe is seeking to reverse past policies by obtaining state and federal recognition to provide services to assist its people.

The community is not protected by a levee and land loss has increased dramatically in recent years due to increased salinization of the water, the reduction of the barrier islands, and the lack of fresh water replenishing the soil. All these factors leave Pointe-au-Chien vulnerable to flooding.

All these storms have forced tribal members to raise their homes, many as high as 13 feet.

The Tribe formally incorporated as a 501(c)(3) nonprofit organization to become eligible for donations, grants and other assistance to document its history, culture, and traditions and to prepare other petition criteria.

With the adoption of a constitution, the Tribe formalized its governing body through elections by the tribal membership. More historical information and the challenges presented by named storms and coastal erosion, is available here.

To learn more about the work of the New Orleans YAVs, go here.