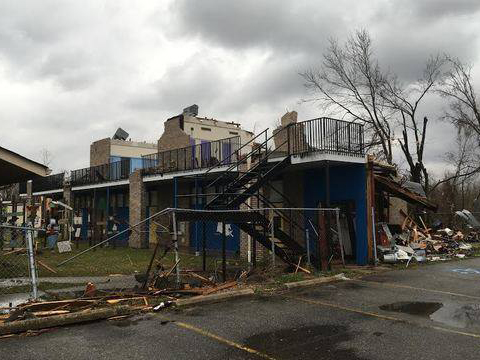 LOUISVILLE – A week after an EF2 tornado tore a path through parts of New Orleans, disaster officials and volunteers are still trying to determine the extent of damage. The National Weather Service confirmed that 12 tornadoes struck seven states on February 7.

Among the areas hit was New Orleans East, which suffered extensive damage from Hurricane Katrina in 2005. The twister, packing winds in excess of 80 miles an hour, also struck the site of the Project Homecoming Volunteer Village, which coordinates the work of thousands of volunteers who come to the area to assist in recovery and rebuilding.

“After Katrina had forced the closure of Peace Presbyterian Church, we worked with Presbyterian Disaster Assistance to convert the property into a volunteer village,” said the Rev. Dr. Ron Sutto, general presbyter and stated clerk with the Presbytery of South Louisiana. “The sanctuary became a community center and kitchen while the educational building was converted into dormitories for work teams. PDA also loaned shower and bathroom trailers.”

Sutto says it is unclear if any of the buildings will be salvageable.

“The tornado blew the roof off of the church and the educational building. In fact, the second floor of the educational building is gone,” he said. “The insurance adjuster has indicated that the building will have to be razed. We are waiting on a structural engineer to make an assessment on the sanctuary. Debris is everywhere and we don’t even know about the trailers yet.”

Project Homecoming was established in response to devastation caused by Katrina. It was originally a ministry of the presbytery with major funding from PDA. Over the last decade, the project has built over 250 homes and managed as many as 10,000 volunteers. Now, it is an independent agency that also provides job training, access to low-cost financing and has developed partnerships with neighborhood organizations.

“Within a day of the tornadoes, I received several calls, one from a faith-based partner agency and one from the Federal Emergency Management Agency (FEMA), asking how they could help,” said Jim Kirk, PDA’s associate for national disaster response. “I think that is an indication of what Project Homecoming has meant to people over the years.”

In addition to restoration work from Katrina, the community has also been dealing with damage from last year’s flooding.

“We are going to churches in New Orleans that hosted volunteer groups after Katrina and those churches have volunteered to work again with Project Homecoming because there are volunteers coming in during spring break in the coming weeks and they need alternative housing,” said Sutto. “Our churches are stepping up to find host sites.”

Sutto says they have applied for emergency grants to assist the volunteers and are identifying partners they can work with to rebuild damaged homes.

“We’ve had many conversations with the Presbytery of South Louisiana and are prepared to assist in any way we can,” said Kirk. “The residents of this region have shown resilience during some very difficult years and we want to stand with them and work with them throughout this process.”

As a way to show support for communities in disaster areas, Kirk says the PDA Advisory Committee had decided to hold its next meeting in New Orleans, prior to the tornadoes. The meeting takes place in March.

“The people here are strong. When houses are destroyed, we rebuild and move on to the next day. You can’t let the storms get you down,” said Sutto.

PDA is able to respond immediately thanks to your gifts to One Great Hour of Sharing.