The Rev. Kerri Allen comes to Mission Responsibility Through Investment from advocacy work 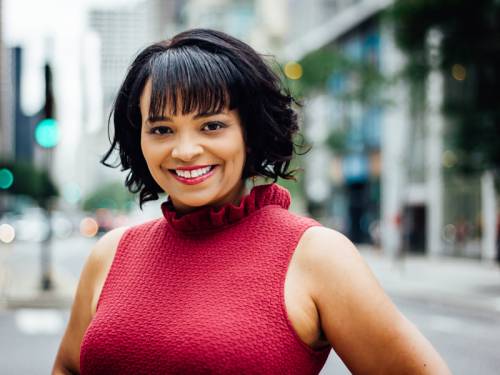 LEXINGTON, Kentucky — The Presbyterian Committee on Mission Responsibility Through Investment’s summer 2019 meeting in Detroit included a meeting with activist Emma Lockridge, who was protesting the impact a Marathon refinery had on her neighborhood.

At one point during the meeting, then committee’s vice-chair, the Rev. Kerri Allen, asked if MRTI should recommend divestment from Marathon.

Having witnessed death and destruction from the facility adjacent to her neighborhood, it would be easy to assume Lockridge would advocate the dramatic step of divestment. But she thought about it and said it could go either way: making a big statement, but also cutting off the avenue for further engagement with the company, which is one of the committee’s primary tools for advocacy.

Lockridge’s words and the meeting, which included a visit to the neighborhood next to the refinery, gave the committee, which has been urged by church members and parachurch organizations to divest from fossil fuel companies, insight into the views of people directly impacted by the company.

That was the point of the visit, to make the impacted community more than just a report and statistics to the members of the committee, whose work is engaging corporations in which the church owns stock to advocate for the church’s concerns.

“I’m always considering how do we see the ‘other’ as human, whoever that is,” Allen said. “And not just how do we see it, but how do we affirm the humanity of people in our policies, in our approaches, in our conversations, which is why part of affirming humanity means that when someone from a group that lives in a community that’s being impacted by climate change or by environmental degradation says, ‘I think you should do x, y, and z,’ what they’re saying has to be an input that is considered and valued, and we have to demonstrate that it’s meaningful.”

A little over a year later, Allen became chair of the committee. At her first meeting as chair, which was also the committee’s first virtual meeting, Lockridge was a featured speaker, updating members on her progress with Marathon.

“I don’t know that I would have predicted this,” Allen says of her role leading the committee focused on corporate engagement and shareholder advocacy.

Allen is manager of mission and spiritual care and the clinical ethicist for a hospital system in Illinois and Wisconsin. She came to MRTI through her work with the PC(USA)’s Advocacy Committee for Women’s Concerns, making her the first person from that committee to become the MRTI chair.

“I think it speaks to the uniqueness and strength of MRTI, which brings together elected members from the boards of the investing agencies, mission agency, and advocacy and advisory committees,” said Rob Fohr, director of Faith-Based Investing and Corporate Engagement and lead staff person to the committee. “No other faith-based investor is structured in this way. It provides an environment for faithful people, who represent very different PC(USA)-related entities, to bring their unique perspectives to our shareholder advocacy work. Kerri has been a catalyst for creating community among committee members and encouraging all to advocate on behalf of their respective entity.

“Kerri is very adept at channeling MRTI’s unique voice — which can probably be best described as a combination of prophetic witness and pragmatism. Kerri’s command of Presbyterian polity, policies and processes help her be an effective ambassador of Presbyterian values to publicly-traded corporations and has helped her provide excellent leadership to the committee at General Assembly and other PC(USA)-related fora.”

Allen acknowledges that markets and finance are not in her expertise, and she defers to staff and committee members to interpret those aspects of the committee’s work. She says her focus is “the big picture.”

“I see part of our role as holding companies accountable,” Allen said. “My leadership is very much to talk about how we approach this as Presbyterians, Reformed and Presbyterian. I look at it from both perspectives, so we are reminded of who we are, and that we are approaching that from this distinct place.

“That accountability thing is important to me, because that is such a part of who we are as Presbyterians, that understanding of how we are accountable to one another as human beings. That’s something we value as Presbyterians, and that’s one of the reasons we’re structured the way we are as a body. I want us to take the best aspects of who we are with us, to carry that with us into these conversations — that this is a moral responsibility that we all have to one another, because that interconnectedness is how we survive as human beings.”

Allen was one of the committee members who pushed for community engagements like the committee’s work in Detroit, as well as a visit earlier that year to New Orleans, where the committee learned about the impact of climate change on communities along the Gulf Coast. MRTI had been criticized for not engaging with communities, and Allen said it was a fair critique.

But she said it is also important for the committee to continue engaging with communities after they visit, like bringing Lockridge back for a follow-up as well as recommending her as a panelist for this year’s CPJ Day in April.

“I don’t want to be that white Christian denomination that goes to South Louisiana and talks to the Black folks and Indigenous folks and we hear what they say and, ‘deuces, we’re out,’ and we don’t make another connection,” Allen said. “That’s not happening while I’m in a leadership role on this committee.”

Fohr said, “These experiences have strengthened MRTI’s work especially in doing shareholder advocacy in the context of multiple pandemics. Kerri’s leadership has been crucial in helping the committee frame the connections between the disparities made increasingly visible from COVID-19, systemic racism and the climate crisis.”

One of Allen’s other roles in the PC(USA) is moderator of the Disparities Experienced by Black Women and Girls Task Force. The committee was to have presented recommendations for approval at the 224th General Assembly (2020). But the assembly, which was shortened and held virtually due to the COVID-19 pandemic, deferred action on the task force report to the 225th GA in 2022, despite several motions to reconsider. The way the situation was handled, and task force members were treated, including Allen, drew an outraged response from many people in church leadership.

“I always look at how Black women are impacted and how disproportionately they are impacted,” Allen said of her work.

And she sees that work intricately tied to the work of MRTI, particularly helping to highlight to the committee and the church the impact corporate financial decisions often have on communities of color, particularly women and children. Those impacts are only amplified during the pandemic, which has had a disproportionate effect on marginalized communities. Lockridge told the CPJ Day audience her Facebook feed looked like “a rolling obituary” of people lost to COVID-19.

“Especially at this particular time in history, for me as a Black woman, for me to be in this position is important because my other work as the moderator of the task force is really about responding to misogynoir and how that is so embedded in the ethos of the United States, it’s embedded in the ethos of the PC(USA), and you don’t need to look any further than the last General Assembly to see that front and center,” Allen said.

“Even though that’s the case, that’s where I believe in the power of the Holy Spirit that has said the Spirit has led me to be in this role for this particular time to lead this committee in whatever direction the Spirit leads us.

“The committee will continue to evolve, where it’s centering justice as its work.”

The Presbyterian Committee on Mission Responsibility Through Investment and Office of Faith-Based Investing and Corporate Engagement is one of the Compassion, Peace & Justice ministries of the Presbyterian Mission Agency.