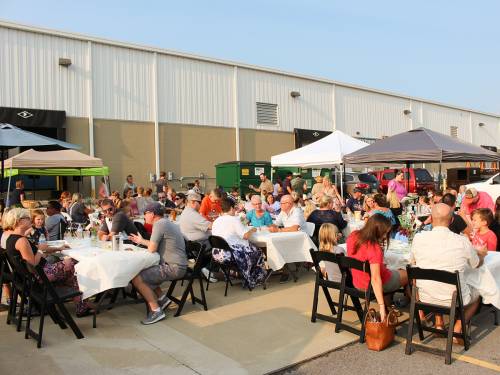 New Creation Church, which is running out of worship space in a warehouse it rents, hosted a barbeque as part of their celebration after becoming the newest PC(USA) chartered congregation August 12. (Photo by Mike Price)

LOUISVILLE — The Rev. Keith Gunter, pastor of the newest chartered PC(USA) congregation, New Creation Church in Hendersonville, Tennessee, finally had a moment to reflect on what has been “a whirlwind of a summer.”

“It’s been quite a journey,” he said of the new worshiping community he helped start in 2012. “The chartering service (August 12) was amazing in part because you never thought it would actually happen.”

Gunter has been overwhelmed lately, by the people at New Creation — and by God’s grace. Two weeks prior to the charter service, as The Presbytery of Middle Tennessee was getting ready to vote to approve the charter, families from New Creation, along with their children, began to come into the meeting.

“It was a like a storm of people, a burst of energy,” he said. “It caught me and everyone totally off guard. Because most of those coming to the presbytery meeting had been unchurched, or without a church home before they found their way New Creation.”

Presbyters’ heads kept turning to see all the families and children coming into the Presbytery meeting — and then there was a burst of applause.

“It was a beautiful thing,” Gunter said. “To see people from New Creation gather around the church like that.”

At New Creation’s first service in Gunter’s home, in 2012, there were 11 people if you count him, his wife Amy, and their three children who were four, two and six weeks old at the time. When around 30 people started coming to worship, New Creation moved to a storefront. And now with over 100 adults and over 50 children on the charter roll they worship in a warehouse.

“My kids have seen entire families baptized — from infant to mom and dad,” he said. “There’s so much good going on.”

Gunter, a Presbyterian pastor’s kid, was an associate pastor in Marietta, Georgia, when he saw that First Presbyterian Church in Nashville was looking for a church planter to start a 1001 new worshiping community in Hendersonville, Tennessee.

Unsure of how God might be leading him, Gunter talked with senior pastor, the Rev. Dr. Todd Jones, who believed healthy churches start new churches not just for their own benefit, but for the sake of the gospel. Having done church youth ministry for years the idea of starting some new appealed to him.

Early in the process of starting New Creation, he was asked if he had any non-churched friends. His answer was “a big no,” which was the beginning of turning his idea of ministry and church upside down.

“I was in my happy little church bubble,” he said. “The best thing I did was allow God to reshape me as I detoxed from normal church life.”

Gunter admits his vision of church was small.

He and Amy, who grew up Baptist, assumed their kids would do what they did at church: go to a special class, get a piece of candy if you brought a Bible and have everything, including your life, perfectly laid out for you.

As they worked at building community for non-churched adults they said everything felt upside down until they allowed God to show them a vision of what their church should be — a safe place for non-churched people to ask questions.

For Keith that meant learning to let go of what he thought he had to control.

“When I stopped trying to force people to be where I wanted them to be in their understanding it began to work,” Gunter said. “Just let them explore and trust the Spirit to do the rest.”

As he lived into this new way of being church Gunter realized how much he’d been missing out on by not having friends outside the church. He appreciates the people who come to New Creation because of how authentic they are and how raw their faith is.

Each Sunday morning New Creation has two worship services. They’ve run out of space for the children aged sixth grade and under. For now, they’re renting a gymnasium next door to the warehouse.

Soon they will begin a $2.5 million building campaign.

Each fall New Creation brings the Hendersonville community together to package tens of thousands of heat-and-serve meals, which are then sent abroad through an international relief organization working to end hunger.

The congregation also maintains an on-site closet full of clothing for use, free of charge, by area foster agencies who care for children in need. And quarterly, on “Missions Sundays,” the entire congregation volunteers in the community in lieu of attending the usual church service.

“I’m thrilled to watch God’s grace unfold in people’s lives,” said Gunter, “and honored to have a front row seat to watch it.”

New Creation was formed in 2012 when the 220th General Assembly of the PC(USA) declared a commitment to a churchwide movement that results in the creation of 1,001 worshiping communities over the next 10 years. At a grassroots level, hundreds of diverse new worshiping communities have already formed across the nation.