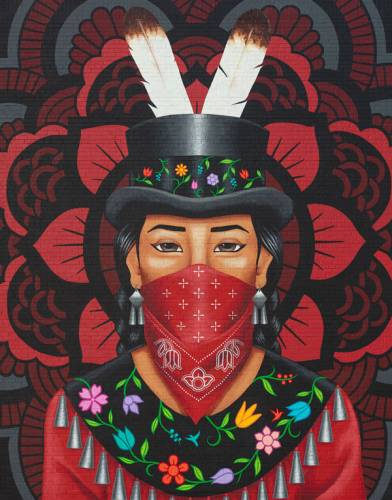 LOUISVILLE — Native American leaders in the Presbyterian Church (U.S.A.) from around the country met in person Nov. 4-6 in Farmington, Minnesota, for the first time since 2020 to discuss implementation of the repudiation of the Doctrine of Discovery by the 222nd General Assembly (2016).

Native leaders gathered over the weekend to plan actions to implement the adoption of recommendations by the 224th General Assembly (2020) for the church’s expanded response to its repudiation of the Doctrine of Discovery.

In June 2020, the Stated Clerk of the General Assembly of the PC(USA), the Rev. Dr. J. Herbert Nelson, II, issued a Call to Action, stressing that the denomination must go “beyond mere words of repudiation” and enact “real, tangible expressions that truly contribute to the thriving of Indigenous nations and communities.”

Included in Nelson’s call were these words:

“Many of our mid councils and congregations are situated in the lands taken from Indigenous nations. We must dig into our histories, and in doing so, we must give priority to histories of the peoples from whom the land was seized,” Nelson said.

“Indeed, this is about addressing the original sin of the United States of America and it is not something we can turn away from,” according to Nelson. “We are asked to confront the church’s alliance with regimes of power that has caused untold suffering and oppression. We must ask how deep we are willing to go to deal with the issues of racism and repentance in this country.”

“What we must do is act,” Nelson said. “Our General Assembly overwhelmingly approved a report in June 2020 that includes an expansive, but by no means exhaustive, set of recommendations as to how this church may stand in solidarity with Indigenous nations and peoples in their fight for sovereignty and human rights.”

The PC(USA)’s Native American Coordinating Council, created by General Assembly overture in 2018, is  tasked with “encouraging, monitoring and sharing the ongoing responses by the national church, mid councils, and congregations to the Call to Action issued by the Stated Clerk” and “making recommendations on how the national church, mid councils and congregations can support Native Americans in their ongoing efforts for sovereignty and fundamental human rights.”  Current members are Fern Cloud, June L. Lorenzo, Anthony Trujillo and Elona Street-Stewart, Co-Moderator of the 224th General Assembly (2020).

Directives for the PC(USA) coming out of the 224th General Assembly (2020) include: