News from the National Council of Churches 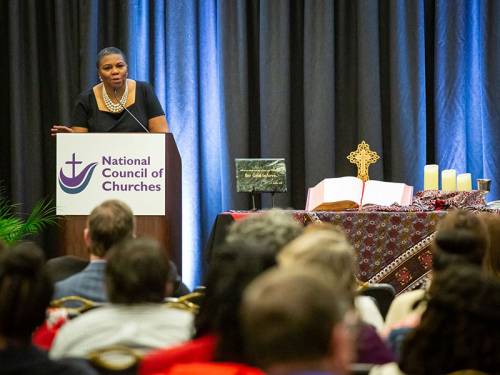 WASHINGTON – The National Council of the Churches of Christ in the USA, the nation’s oldest ecumenical body, concluded its annual “Christian Unity Gathering” last week in a spirit of celebration and hope. Leaders from across the Council’s 38 member communions came to College Park, Maryland, to join in conversation, worship and decision-making. The Christian Unity Gathering (CUG) continued the Council’s “A.C.T. Now to End Racism” campaign, begun with a mass rally on the National Mall last April.

The Gathering hosted the Rev. Dr. David Anderson Hooker, associate professor of the Practice of Conflict Transformation and Peacebuilding at Notre Dame University, as its keynote speaker. Hooker led the gathering’s attendees, a mix of denominational officials, seminary students, faith-based activists and others, in practical exercises that can be used in churches in the work to end racism. These powerful sessions set the groundwork for the Council’s next steps in its A.C.T Now program.

Worship was integrated into the gathering in ways that enriched and challenged the participants. The Rev. Traci Blackmon of the United Church of Christ preached on the “Jericho Road” in the opening service, calling the church to go into the areas perceived as dangerous and off-limits. Bishop Teresa Jefferson-Snorton of the Christian Methodist Episcopal Church reminded participants that we are not to be spectators, but rather liberators to all of God’s people. Litanies in which participants pledged to do the hard work of ending racism in themselves, their churches, and their institutions formed the responses to these powerful sermons.

In addition to the vital ecumenical work done through the NCC’s Convening Tables and the Intergenerational Think Tank, participants also attended “Deep Dives,” interactive workshop experiences, covered subjects that included the Supreme Court, religious freedom, “sacred conversations” on ending racism, and the role of memory and truth-telling in anti-racism work.

“The individuals we celebrate embody the work of NCC as we strive for justice and peace,” remarked the chair of the NCC Governing Board, Bishop W. Darin Moore of the African Methodist Episcopal Zion Church. “Our nation is facing enormous challenges and deep divisions. The Christian Unity Gathering is a powerful witness that Christians can speak hard truths and yet remain in beloved community. In fact, it is only when we can speak the truth in love will we experience true community.”

Immediately following these recognitions, a webcast Town Hall was held featuring the Rev. Dr. Cassandra Gould, executive director of Faith Voices; the Rev. Aundreia Alexander, Esq., associate general secretary of the National Council of Churches; and Ms. LaKesha Womack, author, organizer and consultant. This conversation focused on the importance of voting in the upcoming elections and nonpartisan ways churches can be involved in voter registration and education.

In an important function within the Christian Unity Gathering, the governing board met with ecumenical officers and state ecumenical executives to maintain the critical ties between national church leadership and the work of local and regional ecumenical leaders.

In its Wednesday meeting, the governing board adopted a budget for the 2019 calendar year of $2.4 million, received a progress report from Friendship Press on the update of the New Revised Standard Version of the Bible, and elected persons to serve in various capacities. The Rev. Christian Iosso of the Presbyterian Church (U.S.A.) and the Rev. Ebony Grisom of the American Baptist Churches USA were elected as co-conveners of the Joint Action & Advocacy on Issues of Justice and Peace Convening Table. Ms. Nadia Soghomonian of the Armenian Orthodox Church and the Rev. Dr. W. Franklyn Richardson of the National Baptist Church USA were elected as at-large members of the governing board.

In the closing moments of the meeting, the governing board approved a statement, “The Urgent Need to Lift our Voice in Our Elections,” stating that, “We view exercising and defending every person’s right and responsibility to vote as a way of lifting up the full image of God.“

The dates for the next Christian Unity Gathering is October 14-16, 2019. Information on this year’s CUG can be found at nationalcouncilofchurches.us/cug.