Caucus ‘is challenged to eliminate and combat racism in the Church’ 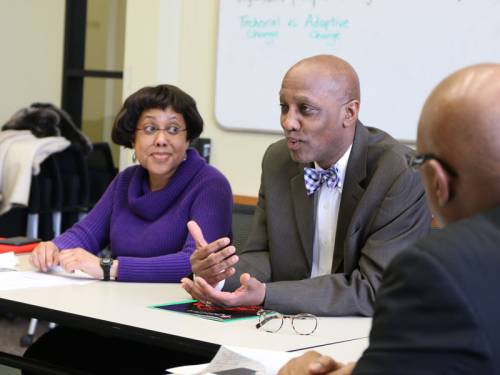 LOUISVILLE – “It is with a sense of importance and urgency that I ask for your help, participation and wisdom to make visible a vision of unity, lest the black witness in the Presbyterian Church (U.S.A.) will soon perish,” said the Rev. Thomas Priest Jr., president of the National Black Presbyterian Caucus (NBPC). Priest recently met with African Americans in leadership roles at the Presbyterian Center in Louisville for a visioning session on the future of the caucus. He wanted to learn more about the staff and resources available at the national Church level to help the organization accomplish its mission.

“The NBPC believes it is a part of, and not apart or separated from our communities,” said Priest. “In serving Jesus Christ we serve the poor, the marginalized and the disenfranchised among us. The NBPC is challenged to eliminate and combat racism in the Church. How then can racism be eliminated in society if we, Black Presbyterians, called by God, cannot or choose not to eliminate racism in the Church?”

Priest pointed out that the purpose of the NBPC requires the caucus to challenge the PC(USA) when it fails to take seriously the needs of the poor, oppressed and marginalized; aggressively combat racism and injustice in the PC(USA); and to achieve full participation of its members in the total Church and society. To accomplish this goal, he believes there may need to be some re-visioning and repurposing for the NBPC to become a living organization that works in partnership with the Church as it develops solid relationships with young adults, congregations and leaders across the PC(USA).

The group then discussed the impact of racism across denominations and raised the question: How does NBPC partner with people of color from other denominations to address racism?

“Having served in the Methodist Church, I realize the problem of racism is not unique to the PC(USA). This is a matter that all denominations will have to address if we are to realize Martin Luther King’s vision of a beloved community,” said Priest. “The black members of predominantly white denominations and all black denominations must come together to address racism.”

The NBPC continues to experience a decline in membership. There are approximately 48,000 black members of the PC(USA), about 4 percent of the denomination’s total membership. However, in 2017, the membership of the caucus was about 500, representing roughly 1 percent of its constituents. Today the membership is fewer than 200. “It is obvious we have a problem,” said Priest. “We must determine the root cause of the lack of participation.”

When asked what the caucus is doing to stay relevant to its members and to reconnect with people who are no longer part of the group, Priest said the organization must be fully engaged in the welfare and the lives of its members and the PC(USA). “We’re looking at ways to reach out and re-establish old relationships and develop new ones,” he said. “This may mean revising the caucus’ mission statement to realize an inclusive society.”

The Rev. Dr. J. Herbert Nelson, II, Stated Clerk of the PC(USA), attended the meeting and said it will be necessary for the “elders” of NBPC to embrace young leaders to build relationships. And during the building process, the NBPC can help to expose these individuals to the different aspects of the Church.

Another key topic of discussion was the caucus’ ability to change the issues facing the black Presbyterian Church. Priest said he realized in working with the caucus board that the organization needed to address the participation and the representation of its members in all areas of the Church, including pastoral leadership, the policy impacting the call process for pastors, and the need for more presbytery executives of color.

“One of our goals is to improve our involvement in the governance of the Church,” he said. “Caucus members must participate and need to be represented on the power committees that determine the direction and policies of the Church.”

Nelson acknowledged that due to the efforts of the Revs. Denise Anderson (who attended the NBPC meeting) and Jan Edmiston, Co-Moderators of the 222nd General Assembly (2016) of the PC(USA), the 223rd General Assembly (2018) will probably have more people of color on committees and serving in other key roles than any previous assembly.

Priest said, “During my call journey I envisioned one morning being on my death bed surrounded by my two daughters and instead of them saying, ‘Dad, why didn’t you do something (about the suffering they were experiencing from racism)? they said, ‘Dad, we know you did all you could!’ I have no other choice but to do everything I can to realize living in a beloved community.”