Presbyterian minister speaks about his mom, Psalm 23 and Educate a Child 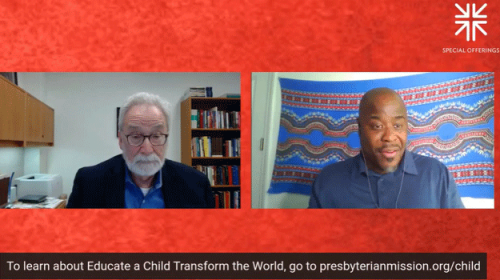 Dr. Bill McConnell, at left, the host of Between Two Pulpits, is pictured with this week’s guest, the Rev. Dr. Alonzo Johnson, who’s coordinator of the Presbyterian Committee on the Self-Development of People and convener of Educate a Child, Transform the World. (Screenshot)

LOUISVILLE — During an appearance on “Between Two Pulpits” that mostly focused on education, the Rev. Dr. Alonzo Johnson began to reminisce about his mother teaching him the 23rd Psalm.

“It was in that 23rd Psalm that my mom taught me to understand discipleship and be dependent on God in all times of trouble,” said Johnson, coordinator of the Presbyterian Committee on the Self-Development of People. “My mother was very clear about God’s provision in our lives and to recognize that provision.”

Host Dr. Bill McConnell, the interim director of Special Offerings, sparked the line of discussion by asking, as is customary during the program, how Johnson would approach the lectionary texts if he were preaching on Sunday.

Giving a nod to Mother’s Day and the difficulties that many people have faced in the last few years due to Covid, Johnson picked what is arguably the most beloved psalm in the Bible.

“I remember learning that psalm, and my mother saying to me, ‘This is important because not only does it magnify the Lord, but it’s also set to remind you that God loves you and is present for you and that God leads you in tough times,’ really instilling in me at a young age, you know, 11, 12, this idea of discipleship and dependence on the Spirit of God and the things of God,” Johnson said.

He also spoke of the need to understand one’s faith and “our need to be led by God, strengthened by God, but also when I think about my mother, to lead others and particularly children and to walk alongside them as well,” Johnson said. 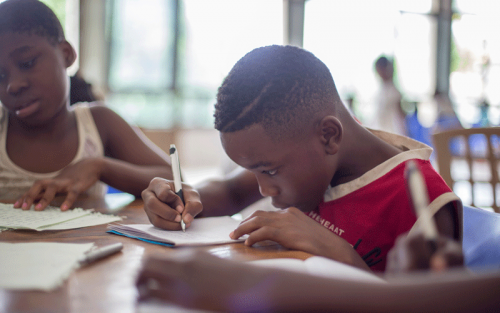 Photo by Santi Vedri via Unsplash

One of the ways that the church walks alongside children is through the Educate a Child, Transform the World initiative, which is supported by the Pentecost Offering. The initiative is described on the Presbyterian Mission Agency website as a response to the 221st General Assembly (2014), which launched a churchwide initiative to improve, equip and connect and to improve the quality of public education for one million children in the U.S. and globally.

Educate a Child congregations commit to “God’s ongoing transformation of the world by working and advocating to ensure equitable, accessible, quality public education,” the website says.

Despite the challenges posed by the pandemic, “we’re seeing churches in the country do amazing work” in places like Chicago, Louisville, Kentucky and New York, said Johnson, convener of Educate a Child. “Education is a really integral part of who we are as Reformed people, and we should not forget this.”

Johnson stressed the need for educational advocacy, especially on behalf of poor, vulnerable and at-risk children. This “continuous work is carried out through an incredibly fine group of folks that I call the education roundtable,” he said. “These are a group of Presbyterians who volunteer their time to meet and be concerned about education, and they have been really instrumental in putting together our education covenant.”

For those looking for guidance, Johnson promoted an online toolkit for churches that want to do education-oriented ministries.

“The resources that we’ve created are easily downloadable,” he said. When it comes to the toolkit, “we want to make it accessible for folks, and we also want to be in conversation with folks who are doing incredibly innovative things in the realm of education and child advocacy.”

Watch this week’s edition of Between Two Pulpits here.

The Presbyterian Committee on the Self Development of People is one of the Compassion, Peace and Justice ministries of the Presbyterian Mission Agency. Support the Educate a Child, Transform the World initiative by giving to the Pentecost Offering.