#GivingTuesday – Join the PC(USA) in responding to a world in need! Give now!
Make A Donation Click Here >
Home › MRTI shares first round of General Assembly environmental compliance scores 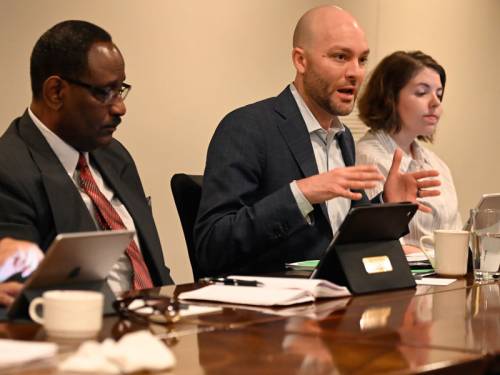 LOUISVILLE — The Presbyterian Church’s Committee on Mission Responsibility Through Investment has completed its first round of scoring corporations’ environmental records, finding some are making progress and others are at risk of potential divestment recommendations.

The committee’s guideline metrics were set up in response to a directive at the 222nd General Assembly (2016) to establish standards to evaluate companies’ environmental, social and governance (ESG) issues. At the 223rd GA in 2018, commissioners approved the framework for those metrics and Mission Responsibility Through Investment (MRTI) set out on its first round of evaluations.

“After the 223rd General Assembly, the committee communicated the GA’s action to all nine companies named,” said Rob Fohr, Director of Faith-Based Investing and Corporate Engagement for the Presbyterian Church (U.S.A.). “MRTI leadership also sent letters to the mid-council leaders where the companies are headquartered, making sure they were aware of the GA directive.”

It was not just MRTI putting together the metrics, a rigorous survey of 55 points on which companies were rated. The committee received input from partner groups including Fossil Free PC(USA), which has been lobbying the church for divestment from fossil fuel companies, and Faithful Action on Climate Change, an advocacy group based in the Synod of the Sun — a network of 11 presbyteries in Texas, Oklahoma, Louisiana and Arkansas.

“MRTI underwent a comprehensive and inclusive process to carefully assign weights to all of the criteria included in the Guideline Metrics framework. The committee took into account General Assembly policy as well as guidelines from the Climate Action 100+ and others,” Fohr said.

MRTI is part of Climate Action 100+, an investor initiative that represents more than $34 trillion of assets under management, or one-third of the world’s investment capital. The initiative’s goal is “to ensure the world’s largest corporate greenhouse gas emitters take necessary action on climate change,” according to its website.

Through its metrics, MRTI evaluated nine companies named by the 223rd General Assembly, including energy companies Chevron, Conoco Phillips, Duke Energy, ExxonMobil, Marathon Petroleum, Phillips 66, and Valero Energy and automotive manufacturers Ford and General Motors. The evaluations are based on public disclosures, reports and filings, third-party evaluation from Sustainalytics, and the quality of MRTI’s direct engagements as of mid-June 2019.

The first round of metrics was reviewed and approved at MRTI’s summer meeting in June in the Detroit area, where committee members met with representatives of the auto manufacturers as well as people in the Flint community impacted by the water crisis and representatives of a neighborhood affected by Marathon Petroleum’s Detroit refinery. 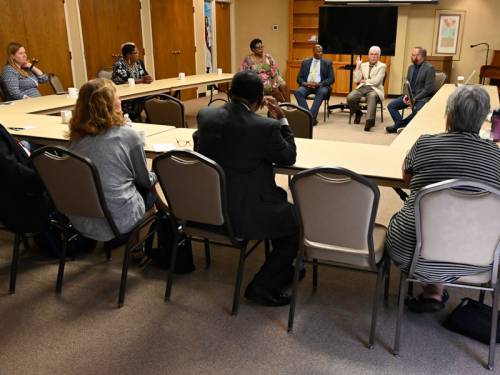 MRTI board members met with people from the Flint community and filmmaker David Barnhart for a private screening of the new documentary “Flint: The Poisoning of an American City” from Presbyterian Disaster Assistance’s Story Productions and a discussion. (Photo by Rich Copley)

“The scoring reflects what we know about different sectors,” said Joseph Kinard, chair of MRTI. “The oil refiners are lagging behind other companies with how they are shifting strategy and operations to address climate change while the automakers are doing much better in this area.”

The scoring bears that out as the top scorers were Ford and GM, with both landing in the “Blue” category, indicating that each company has a “good track record of shareholder engagement. Company benchmarks its progress against others in industry/sector; conducts independent verification of its data and operations. Policies, programs, goals and targets in place for ESG issues and regularly discloses information.”

The top level of the metrics is “Green,” meaning a score of 206 to 240 on a scale of zero to 240. None of the companies scored that high in this survey.

Three petroleum companies — Marathon Petroleum, Phillips 66, and Valero Energy – scored in the lowest tier of “Red,” meaning scores of zero to 100, with Valero at the bottom with a 73. The red category is described as “overall, company may have poor record of shareholder engagement, poor record on environmental, social and governance (ESG) issues. Company may or may not acknowledge importance of ESG issues.”

While being in the bottom tier puts a company under added scrutiny with the committee, Kinard said that does not automatically mean it will be recommending divestment.

“We can’t make that call right now,” he said. “While we have three companies who scored in the red and have communicated with presbytery officials where these companies are headquartered, we still have a few months of important engagement ahead of us before making recommendations to be considered by the 224th General Assembly.”

“To MRTI, a divestment recommendation is essentially an admission that further engagement with a company will not likely yield any further movement towards compliance with GA standards. For the first time MRTI has clear General Assembly policy guiding a potential divestment decision on environmental issues, as outlined through the Guideline Metrics,” Fohr said.

Committee leaders also noted that companies in Orange (100-135) — Chevron and Exxon — are not necessarily out of the woods. Earlier this summer, MRTI joined an effort to vote against Exxon’s board of directors when the company petitioned the Securities and Exchange Commission to exclude a shareholder proposal asking the company to disclose short-, medium- and long-term targets for greenhouse gas emissions reduction in its proxy materials for its general meeting at the end of May.

“We’ve communicated in writing to all nine companies and have had conversations with a few about the first-year scoring,” Kinard said. “The companies are appreciative of our transparency. There is some disagreement about how we measure progress. We find these conversations help to glean even more information from the companies.”

He added, “We anticipate some of the oil and gas companies to show some improvement.”

MRTI will prepare a report for the Presbyterian Mission Agency Board for consideration during its Feb. 12-14, 2020 meeting. That will be followed by a report and recommendations to the General Assembly in June. But that will not be the end of the process.

Fohr says MRTI will continue to monitor companies. Ideally, some will start to move into the Blue of Green categories — perhaps even off the watch list.

“It is important to remember that these engagements are under the auspices of the Climate Action 100+ initiative, which is the largest investor initiative ever assembled to address the largest problem humanity has faced,” Fohr said. “By the end of this campaign in 2023 we will have a clear idea which of these companies are moving towards a low-carbon future and which are not. For those who do not adequately move as a result of CA100+ investor pressure, it is reasonable to assume that no amount of shareholder engagement would yield a different outcome.”