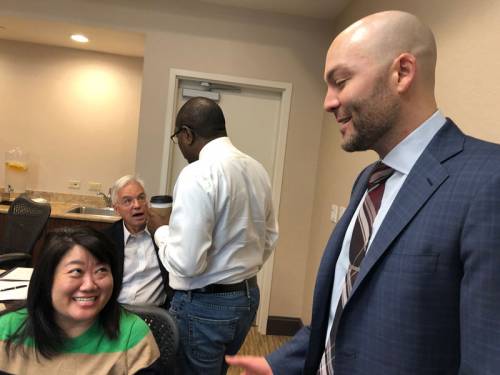 HOUSTON – As the Mission Responsibility Through Investment Committee (MRTI) gathered here for its first meeting since General Assembly in June, MRTI Vice Chair Kerri Allen opened with a womanist theological reflection on 2 Samuel, exploring the story from the perspective of Rizpah, a concubine of the late Saul.

“Rizpah has a powerful voice in her silence,” Allen notes. When Rizpah’s sons are publicly executed to settle a blood feud, and their traditional burials neglected by King David, Rizpah responds with a protest that puts her own body on the line — staying with the bodies to protect them until finally David gathers the bones and “allows for the process of public healing to begin.”

MRTI’s strategy of witness involves a lot more conversation. But, as with King David, it takes persistence to engage corporations until they listen. While MRTI is sometimes described as “the divestment committee,” the name is somewhat erroneous. Mostly it works through corporate engagement, ideally coordinating with other justice-oriented shareholders in reforming corporate practices inconsistent with PC(USA) policy. Divestment and stock proscription are options that MRTI invokes when companies refuse to engage in dialogue, negotiate in bad faith, or are unwilling to work toward compliance with the MRTI’s General Assembly-approved corporate responsibility screens.

Historically, many of MRTI’s engagements have focused on human rights. Since 2014, however, 75-85% of MRTI’s work plan has involved environmental and climate change issues, particularly with oil and gas companies. This past June, the 223rd General Assembly affirmed MRTI’s implementation of its mandate from the 222nd General Assembly (2016), adding language naming nine companies as examples meriting further scrutiny from MRTI. As part of the report, MRTI included guideline metrics designed to evaluate whether companies are adequately and openly moving toward a low-carbon future. One metric identifies whether a business model is consistent with limiting global warming to 2 degrees Celsius. (The list further values efforts to hold it to 1.5 degrees.) Another metric evaluates transparency in reporting political spending — to make it harder to hide anti-climate spending behind the facade of a good corporate responsibility policy. The metrics also account for the “carbon intensity” of energy production, so MRTI can advocate that companies transition to whichever more efficient technologies are feasible in a given company’s context. (The full list of guideline metrics is available on MRTI’s web page.)

Both when continuing the engagement process and when considering divestment from a company, the church has more weight when it coordinates with other institutions. That’s where Climate Action 100+ comes in: the largest corporate responsibility coalition of investors ever assembled (currently around 300) representing  $30 trillion in assets under management, or around one-third of the global economy’s invested capital (not including derivatives speculation).

The group developed a list of 100 companies that are large emitters of greenhouse gases, and it is engaging each to urge major reductions in emissions — while threatening coordinated divestment if companies do not cooperate. In the future, more companies may be considered. Several companies currently on the list are in the PC(USA)’s portfolio, and MRTI is coordinating its engagement with those companies with Climate Action 100+. In the case of Philips 66, MRTI has been named a co-lead for the process.  (Philips 66 is one of the “GA 9,” as MRTI members refer to the nine companies specifically called out by the General Assembly for continued MRTI scrutiny).

MRTI met with a number of stakeholders in Houston, including local Presbyterians dependant on the energy industry — generally supportive of engagement over divestment — as well as with Mark Eakin, a liaison to MRTI from Fossil Free PC(USA).

Eakin, a specialist on the effects of climate change on coral reefs, supported taking different approaches with different companies — whatever will have the most impact. But he questioned the notion that the MRTI metrics would effectively engage with companies in parts of the industry, saying, “the challenge is that any company whose profits are based on growth in the production of fossil fuels is inherently incompatible with the need to avoid the earth warming more than 4 degrees Fahrenheit.”

In contrast, Lynn Hargrove, stated and recording clerk for the Presbytery of New Covenant, emphasized that a top priority for her was retaining church members, saying, “I don’t want to break the church” over the issue. She also requested official written materials from MRTI specifying its role as an advising committee (not the manager of investments) and detailing its process.

MRTI also met with representatives from Noble Energy, a company that fits neatly into the broader discussion at the meeting. Since a shareholder resolution calling for a “climate change scenario analysis” presented by MRTI won 46% of votes last year, the company’s leadership has become increasingly responsive to MRTI’s proposals related to climate change risk reporting. Noble is a small enough company that renewable energy transitions are beyond the scope of its capabilities, but due to investor engagement it has been quick to adopt methane emission-reducing technology. Noble has also done work in displacing coal use with natural gas, which is only half as carbon-intensive. Continued engagement with Noble could encourage these investments and perhaps strengthen norms of accountability and transparency.

As MRTI’s environment subcommittee works to finalize the weighting system for its metrics with input from multiple sources, including Mark Eakin, it faces a tradeoff: will it implement some of those metrics as bottom-line thresholds for continuing engagement — a strategy to strengthen its position with the companies willing and large enough to meet those thresholds — or will it be more flexible with individual companies, even smaller ones, by tactically focusing on the metrics which a given company is able to meet?

It’s unclear which approach may lead to greater reductions in carbon and methane emissions, and decisions about how to weight the metrics will take discernment. But MRTI chair Joseph Kinard has hopes for their success over the next year: “Our hope is to do exactly what the GA asked us to do, which is to implement the metrics of the newly established environmental screen and to follow the example of Jesus Christ in engaging people — and, in our case, companies — to do better.”