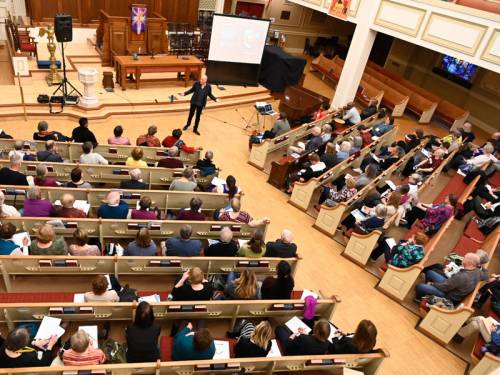 WASHINGTON — Angela Nichols of Columbia, Maryland stood in the sanctuary of New York Avenue Presbyterian Church shortly before dinnertime Friday and marveled at the amount of information she had received.

“This day has reinforced how interconnected all the issues we talked about today are,” said Nichols, a member of First Presbyterian Church of Howard County. “Poor people were disproportionately affected by the Flint water crisis, by incarceration and poor education, and how interrelated everything is. These are problems that need to be fixed.”

Nichols had just completed her first Compassion, Peace & Justice Training Day, which aims to give people in the church the tools to tackle some of the major problems facing the world, including immigration, racism and global warming. Presented by the Presbyterian Church (U.S.A.) Office of Public Witness in Washington, it was a day of workshops, keynotes, meeting and networking that is a prelude to Ecumenical Advocacy Days Saturday through Monday in nearby Arlington, Virginia. 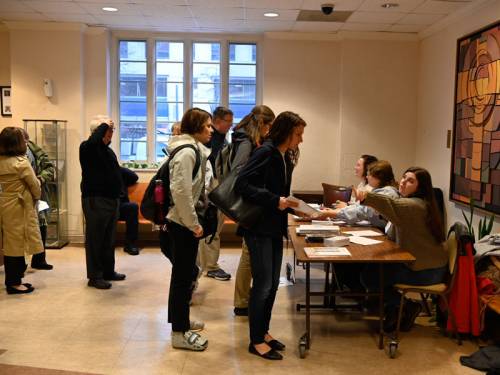 Another first-timer was Presbyterian Mission Agency President and Executive Director the Rev. Dr. Diane Moffett, who was named to the post a month after last year’s CPJ Day.

“I was asking, how can we get more people to hear this, to be inspired by it, to connect the dots, because I think it was very inspirational and also educational,” Moffett said. “There’s always something to learn and be inspired by, especially as relates to Matthew 25.

“I’m always really into Matthew 25 and how it intersects with, ‘This is what we’re supposed to do.’ So in these ministries, they’re committed not just to proclaiming in mouth, but they’re putting feet to faith, hands to hope and legs to love — to actually be a presence in the communities where they are.” 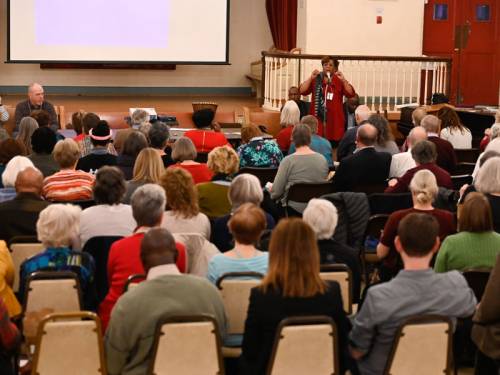 The Rev. Dr. Diane Moffett, president and executive director of the Presbyterian Mission Agency, talks about the Matthew 25 Invitation during lunch at CPJ Training Day. (Photo by Rich Copley)

“This is not about a hero narrative but a movement narrative,” Moffett said, picking up on the theme of the day: building movements.

Speaker, musician, author and activist David LaMotte set the stage for the day with a keynote address laying out the theory that movements are really the way things get done. One of his primary examples was Rosa Parks and the Montgomery Bus Boycott of 1955 and ’56, pointing out that Parks’ refusal to move from her seat on a city bus was simply part of a movement and plan that had been put together over time.

One of the most important moments in that movement, he said, was activist Jo Ann Robinson leading an effort to crank out 17,500 fliers overnight to get the boycott started the day after Parks was arrested.

“By a Bruce Willis definition,” making copies would not be dramatic and heroic, LaMotte said, “but I absolutely agree that was an awesome thing.”

While there are certainly examples of a single hero taking dramatic action when needed, LaMotte said, “how do we combat climate change with that model?”

Read more about the talks by LaMotte and Davis in upcoming Presbyterian News Service stories. 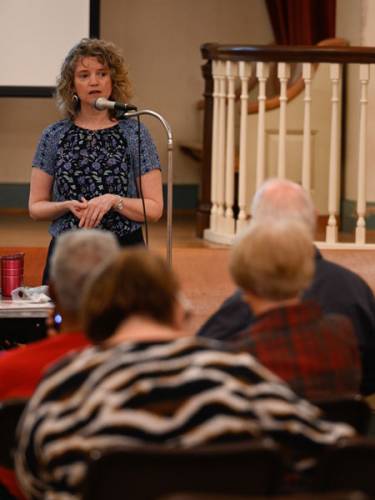 The 221 people registered for the eighth annual CPJ Day heard from a variety of workshop presenters on topics including morality and public policy, movement building in nature, immigration and the Poor People’s Campaign.

Going all the way back to the Genesis story of Adam and Eve, Andrew Kang Bartlett of the Presbyterian Hunger Program told his audience, “What we need to do is find a consciousness that will put us back into a unity with nature instead of apart from it.”

Teresa Waggener, manager of immigration and legal resources for the Office of the General Assembly’s Office of Immigration Issues, told her audience numerous heartbreaking stories from the border between the United States and Mexico and exhorted the audience to speak out on immigration issues, saying, “We all have each other, we have these stories, and we have God.”

Princeton Seminary student Tyler Brinks, whose home church is Kirk in the Hills Presbyterian Church near Detroit, was particularly taken with public policy talks by Advisory Committee on Social Witness Policy coordinator the Rev. Chris Iosso, saying, “It is great to find the church has so much policy on so many issues.”

Office of Public Witness director the Rev. Jimmie Hawkins said he was happy with what has become an annual event for his office. 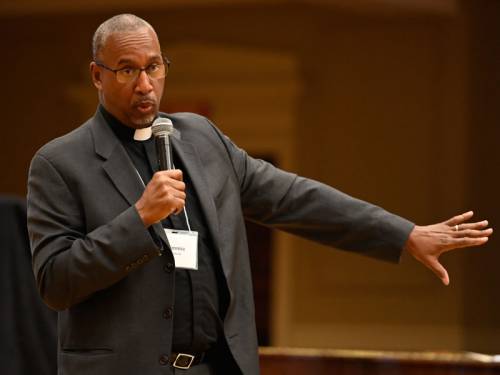 The Rev. Jimmie Hawkins, director of the PC(USA) Office of Public Witness, talked about the Poor People’s Campaign at CPJ Training Day. (Photo by Rich Copley)

“They feel the need to be engaged in advocacy training,” Hawkins said of attendees, who came from states including Kansas and California. “So it is great to see the church is investing on the local level in people who want to do justice work.”

Compassion, Peace & Justice ministries director Sara Lisherness concluded, “It is always good for people committed to justice work in the church to come and be fed and be with one another, be in community. This provides that opportunity in amazing ways.”