…be led forth in peace. (Isaiah 55:12). Support to the Peace & Global Witness Offering.
Make A Donation Click Here >
Home › Mission Responsibility Through Investment: A look back 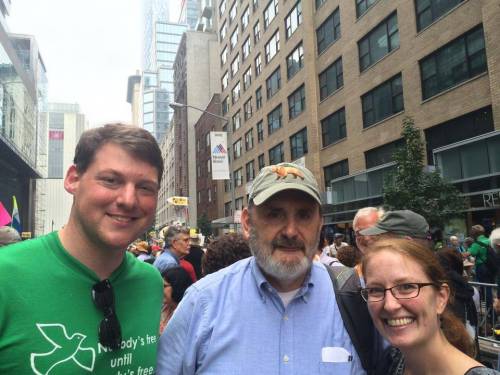 LOUISVILLE – The early 1980’s were pivotal moments for Bill Somplatsky-Jarman. A young seminary graduate, he was looking for a place to serve God that was unique to his desire to address important social justice issues of the day.

In 1984, the apartheid system in South Africa was drawing fire from human rights groups across the country, and the General Assembly began looking at whether divesting from companies doing business with the South African government might be an effective means of addressing the problem.

It was during the General Assembly’s initial move toward divestment as an ethical strategy that Somplatsky-Jarman became a member of the PC(USA) staff working as a part of Mission Responsibility Through Investment (MRTI). In collaboration with his colleagues, he developed an international/ecumenical strategy to pressure the banks that were lending money to South Africa, to pull money out and demand the government repay significant debts and bank loans. It was the beginning of a lifetime of work.

“I feel this has been a big chunk of my life, and I’ve been quite privileged to have held such a position and watch the entire field of faith-based investing and socially responsible investing emerge to become quite mainstream,” he said. “It now characterizes the approach of many institutions and investors.”

“In the early days, we were often viewed as a small minority who were raising questions but had no real muscle behind us,” he said. “Now we partner globally with major public pension funds and other investors that seek to combine financial gain with social and moral progress as well. Trillions of dollars are now invested this way. I feel quite pleased to have contributed to that.”

Apartheid generated a lot of headlines during those early years and it allowed Somplatsky-Jarman to “cut his teeth” on a very emotional and highly-charged issue.

“The squeeze on capital access is listed as one of the key elements that brought about the demise of the apartheid system,” he said. “The resistance in South Africa to apartheid was the major factor, but we worked to strengthen their hand, and I’m very proud of the role we played in helping that happen.”

Over the next 32 years, Somplatsky-Jarman and the rest of the MRTI team would tackle a number of issues from climate change to predatory lending practices.

“We were in on the ground floor of pushing banks hard around predatory mortgages, servicing and foreclosure issues,” he said. “The banks we worked with closely took precautionary steps to lessen their exposure to this. When everything collapsed, these banks survived and have done very well. Others did not listen, and many are no longer around.”

Environmental causes have always been special to Somplatsky-Jarman. In fact, he took classes at The Yale School of Forestry while attending seminary.

“I’ve always been interested in how one maintains the integrity of God’s creation and how one can utilize the gifts of creation to better the human community through economic activity,” he said. “I had the privilege of being the first person to staff environmental programs directly. I represented the church at the Rio Earth Summit in 1992, and since then have attended every UN climate change negotiations except one.”

When asked which issue generated the most controversy, he refers to the church’s stand in the Middle East, particularly, the church’s support for a just peace in Israel-Palestine in the long-drawn out conflict and military occupation. During the 221st General Assembly (2014), the church voted to divest from Caterpillar, Hewlett-Packard and Motorola Solutions.

Somplatsky-Jarman describes the 2004 General Assembly as a “watershed event” as it instructed MRTI to begin focused work to align the church’s investment practices with the GA’s numerous social policies on how to achieve a just and lasting peace in Israel-Palestine. There were organizations and people who wanted to prevent the church from aligning its moral principles with its investment practices in this way, so with every subsequent General Assembly, there were heavily-funded and highly-organized efforts to stop this process in its tracks. There were others who wanted to move faster than the pace of the MRTI process.

Despite this opposition, the General Assembly and MRTI stayed on task and accomplished many things, including: the GA made clear its expectation that all companies where the church held investments were to be involved solely in peaceful pursuits; it defined those peaceful pursuits based on existing church policies; it affirmed the MRTI process as the proper vehicle to determine company compliance; and it initiated a program of proactive investments and community and economic development in the occupied territories and in Israel. While some companies altered their practices, others did not. In those cases of no progress, the General Assembly’s divestment action followed years of engagement.

Following the 222nd General Assembly next month, Somplatsky-Jarman will step down from his role with MRTI. He credits a number of people for making this his life’s calling.

“Dean Lewis, my immediate supervisor, valued ethical commitment and intellectual inquiry. Others include the first MRTI chairs Wayne Todd and Dan Thomas followed by a long line of very competent and committed chairs and committee members,” he said. “I’ve been very blessed with a really strong committee leadership. The growth of people serving on MRTI has been rewarding, and I treasure the opportunities I’ve had to work with such dedicated people in my ministry.”

One of MRTI’s strengths, according to Somplatsky-Jarman, is the ability to represent the history of faith-based investing consistently with integrity, relying on the strong theological and ethical basis for this work.

“I think people understand that when MRTI tackles an issue, it does so thoroughly with special attention to sound theological and ethical analysis,” he said. “Presbyterians can count on MRTI to have done its homework and followed the process.”

Somplatsky-Jarman has worked with a number of Presbyterian leaders and volunteers over the years. Sara Lisherness, director of Compassion, Peace and Justice, worked with him for most of his time with the PC(USA).

“Bill is a highly respected partner and leader in the socially responsible investment community. His depth of knowledge on global justice issues is phenomenal. The Middle East, workers’ rights, climate change, the environment are just a few of the concerns Bill has addressed over the years,” said Lisherness. “His wisdom will be deeply missed, as will his depth of knowledge and guidance on key issues facing the church and the global community today.”

“Bill brings qualities of humility, dry humor and incredible intellect to every corporate engagement or other activity in which we participate,” she said. “He has an encyclopedic knowledge of the history of the movement he helped found, the processes of the Securities and Exchange Commission, and the polity and politics of the Presbyterian Church. Every time I work with him on a project, I come away smarter and more committed to the witness he has served so remarkably.”

The Rev. Brian Ellison was chair of the Committee on Mission Responsibility Through Investment from 2008 to 2012. He is currently serving as executive director of the Covenant Network of Presbyterians.

“Bill modeled for me the pairing of true idealism with a canny realism – he was willing to keep tackling the world’s problems one small step at a time, never believing that slow progress wasn’t still progress,” Ellison said. “My service as MRTI committee chair through a pretty taxing period was deeply rewarding, in large part because with Bill’s partnership, I was able to find my own advocacy voice, my justice voice. And that has changed the course of my life and ministry.”

While stepping down, Somplatsky-Jarman doesn’t plan on disappearing. He says he still plans to keep his pulse on the key issues facing the church.

“The committee has a lot to contribute such as exploring the human rights dimensions of corporate involvement around the world and the responsibilities and obligations of companies. I would relish the opportunity to continue that,” said Somplatsky-Jarman.