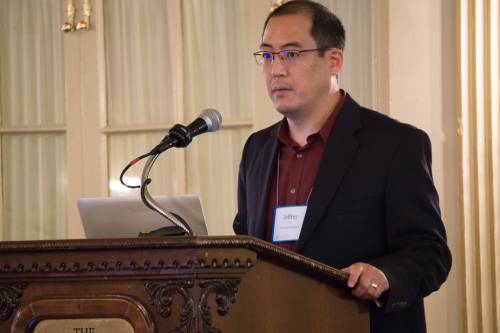 Jeffrey Joe reports on the ‘Next Steps for 1001’ ministry team activities at the September 2016 meeting of the Presbyterian Mission Agency Board. (Photo by Gregg Brekke)

LOUISVILLE – The newly formed Ministerial Teams gathered yesterday as part of the Presbyterian Mission Agency Board meeting and reported their activity to the plenary today. The teams consist of board members, PC(USA) agency and staff representatives working in the topical area being considered.

Teams are expected to meet up to 18 months and will disband when their mandate is complete. Upon the conclusion of one team’s tasks, other teams will be formed to address new issues.

Group reports are as follows:

The ministerial team with representation from seven different presbyteries serving in Presbyterian churches as ruling elders, interim pastor, presbytery moderator and Presbyterian Mission Agency staff came together to address the issue of power & privilege. The ethnically mixed group including a Native American, Latino/a, African American and Caucasians shared their perspective on power and privilege and its impact in this country and in the Presbyterian Church.

Susan Osoinach, committee chair said, “I think we are working toward the very real fact of power and privilege in the church. And, because we’ve pushed this issue to the side for so long, it is now past time that we address it.”

In a report to the PMA Board the team asked the question, what are the three most important things the PCUSA could do to address power and privilege? However, they came to the realization that the church has done a great deal of work on this issue over the past 20 years and that the results of that work has remained on shelves and has not been reviewed or considered for implementation in many instances.

Recognizing there continues to be work to be done around structural racism, the team reported they would go back and look at all of the recommendations that have been put forward in the past 20 years. They concluded their report by saying the way the Presbyterian Church has been looking at power and privilege isn’t working, Osoinach said, “This is our karios moment and we need to take it.”

2) Increased Coordination with the Office of the General Assembly

Board member Conrad Rocha reported for the group, saying, “We wanted to be clear that we weren’t a surrogate for the way forward commission, we’re not trying to do their work or in any way supplant it. We only want to find ways to coordinate with OGA and how that can further the mission of the church.”

Rocha said a formative task for the team would be to document currently existing areas of cooperation between PMA and OGA.

The group also identified several ideas as possible areas of cooperation, in addition to existing common activities. Rocha said the group would need to continue its discussion with the inclusion of Presbyterian Mission Agency and Office of General Assembly staff, in addition to engaging the OGA Board and COGA – the Committee on the General Assembly – in the conversation “not only to gather and discuss areas of cooperation, but to model collaboration and cooperation in the process.”

By common consent the group voted to elect Wilson Kennedy as vice chair of the group. Kennedy is a corresponding member of the PMA as the representative from COGA.

With one wall covered with charts and graphs, the ministry team began the task of trying to fully understand how donations are allocated between mission funding and administrative costs. The group is hoping that the end result will be more transparency and communication to the giver on how dollars are being used by the PMA.

“As we talked about it, there were complex and sensitive issues of trust and power dynamics,” said the Rev. Wendy Tajima, team chair. “Principals of transparency have a lot to do with allocating and communicating how we manage expenses.”

The group came away with two main areas of work:

The ministry team plans to study all areas of the PMA to determine what is program and support. Members feel the number one priority should be that donors in general have a positive feeling about how their funds are being used.

4) Next Steps for the Young Adult Volunteer Program

The ministerial team charged with the task of determining the next steps for church’s Young Adult Volunteer (YAB) program met to explore possibilities for the ministry. The YAV program continues to be a successful ministries of the Presbyterian Mission Agency that allows for young adult involvement in the church. It is a formation program for adults ages 18-30 that allows for leadership development through faith in action.

“Our task is fairly broad,” said team chair Marci Glass. “While the program has been around for more than 20 years there are still people in the church and on the PMA board that are not familiar with this program. We’re looking at all aspects of the program.”

The team raised several questions. “Recruitment is one of the issues we’re considering, “ said Glass. “We have to ask ourselves, ‘How do we find the right people for the program?’” Glass pointed out that “word of mouth” is the best recruitment tool. “We want to make sure we’re reaching all potential volunteers,” she said.

Another issue noted by the team was the need for continued funding and making sure the funds raised do the work that needs to get done without unduly burdening budgets and taxing participants.

The group discussing world mission competencies in domestic mission said it would seek to find ways to leverage training and resources utilized in training, sending and equipping mission co-workers for use in domestic mission including cultural humility, intercultural competencies and communication strategies. It also elected the Rev. Raul Santiago-Rivera as vice chair.

“We began to identify who at PMA could be helpful to us and we’ve scheduled our meetings through the fall,” said Ramsay. “[We] hope to engage Vera White in 1001 New Worshiping Communities who has seen the development in our immigrant churches and intercultural contexts. We continue to work with and will develop resources we will hopefully present to you at the March board meeting.”

Speaking to proficiencies in existing ministries such as the Young Adult Volunteer (YAV) program, Ramsay said, “Part of what we’re attempting to identify are ways we can learn from our earlier work in developing cultural competencies in our domestic mission and enhance our effectiveness here in the U.S. One of the ways we talk about our work – trying to be clear about our intercultural competencies – is exploring how they also reflect the complexity of our social identity.”

6) Role of Print in the PMA’s Communication Strategy

What should be the focus for print media within the PMA? That was the main question to come from the initial group meeting. Surrounded by copies of the PMA’s major print publications: Presbyterians Today, Mission Mosaic, Mission Crossroads, PHP Post and the Torch, the team came away with more questions than answers.

There was lengthy discussion about the reach and purpose of each publication and how to expand the appeal across the denomination.

“Are these being used to tell a story or could we use them to engage people on an issue?” asked the Rev. James Ephraim. “What happens if we stretch our imagination and use it for something else? Perhaps they could be used to start a conversation in churches.”

The team believes a majority of Presbyterians in the pews aren’t aware of the existence of some of the publications and there was discussion on how to broaden the reach.

“We need to take it to grassroots, get pastors involved,” said Ephraim. “We began to look at what role print plays in our society today as well as the church. As we look at numerous publications, how effective are they? Who is the audience? Can we change the audience?”

There was also discussion about print’s role with the continued growth of social media. The group felt there needs to be a better understanding of members’ preferences (online versus print copy.)

“One of the big issues that came up was, ‘Are we looking for print to be profitable?’” asked Ephraim. “Can print help us expand the gap and serve as a form of evangelism?”

Toward the end of its deliberations on September 14, the ministerial team tasked with identifying the next strategic steps for the 1001 initiative, sounded a strong note of hope along with its ongoing commitment to help the PMAB and the whole PC(USA) recall and reclaim the vision with which the movement began when it was launched at 220th General Assembly (2012).

To date, almost four years into the ministry, the 1001 initiative has accomplished 353 new worshiping communities representing 120 presbyteries, 78 percent of whose worshipers are new to the PC(USA), 53 percent of whom are racial ethnic with 64 percent of participants under the age of 40.

The team also heard from Vera White, coordinator for 1001 New Worshiping Communities and the Rev. Dr. Charles B. “Chip” Hardwick, director of the PMA’s Theology, Formation, and Evangelism, and several other staff colleagues.

Members received a full briefing on the state of 1001’s finances, its ongoing research initiatives, the movement’s strategies—on which team members had an opportunity to give feedback—and the initiative’s challenges moving forward, which team chair Jeffrey Joe recapped in his report to the full board. Among those are building staff, a pending cy-pres [reallocation of designated funds] court action to repurpose funds for new worshiping communities, resourcing mid councils, and the long-term sustainability of new worshiping communities.

Of the initiative’s current and possible future financial status, Joe said, “1001 can operate on current money levels, but it will also benefit from the positive result of these cy-pres actions.”

Hardwick said that if the full amount resulting from the cy-pres actions comes through, it has the potential to effectively double the initiative’s annual operating budget.

Members of the ministerial team on Implementing Belhar were fully oriented by the team’s chair, Patsy Smith, to the nature of the question before them, specifically: “What strategic steps should be undertaken to resource mid councils and worshiping communities desiring to implement the vision of a fully inclusive church informed by the Belhar Confession?”

Each member received a packet of information with copies of publications and print materials produced by the PMA on Belhar, as well as copies of actions from the 222nd General Assembly (2016) with particular relevance to the Belhar Confession’s three main themes of unity, reconciliation, and justice, especially Item 10-03 on the worsening plight of the African-American male.

“For me it would be helpful to have a clear understanding of what efforts have been undertaken thus far,” said team member, the Rev. Mark Brainerd, associate pastor of Westminster Presbyterian Church, Greensboro, N.C., who was later elected vice chair.

Team member, the Rev. Chad Herring, identified the challenges of implementation as engaging the wider church with Belhar and making the resources widely available, to which Brainerd added “bringing the documents into our daily living.”

“We added to and subtracted from a preliminary list of materials that can be made available to everyone who is desiring to implement inclusion as informed by Belhar,” said Smith in her report to the full board on Sept. 15. “Again and again we brought ourselves back to our charge. We discussed what methods of communication we would tap into and we developed two to three preliminary strategies and developed questions that will inform the group as we refine those strategies.”