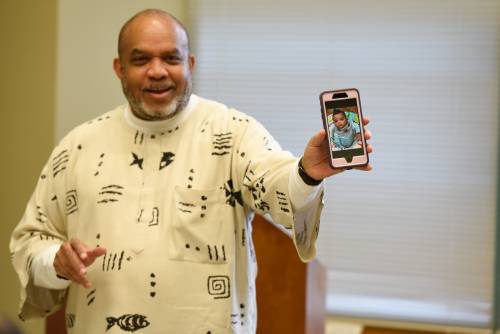 LOUISVILLE — Saying he’s “been yearning to come” visit staff at the Presbyterian Center, the Rev. Dr. Alton B. Pollard III, president of Louisville Presbyterian Theological Seminary since Sept. 1, did just that Thursday, quoting this Valentine’s Day scripture from 1 John: “Beloved, let us love one another, because love is from God …”

“It’s always important to begin with love, because that’s what God is,” said Pollard, who has been a pastor and seminary professor as well as the former dean of the Howard University School of Divinity.

It’s “critically important” for him as a new seminary president to establish and develop relationships with Presbyterian “kith and kin,” he said.

Most recently the “kin” part has been taking center stage for the Pollard family.

“I’m a grandparent. That’s the most important thing you need to know about me right now,” he said, displaying a photograph of young Alton Brooks Pollard V — also known as “Quint” — to a roomful of more than 20 people gathered to hear from Pollard, who was introduced by the Rev. Dr. Diane Moffett, president and executive director of the Presbyterian Mission Agency. The PMA’s Office of Theology and Worship arranged Pollard’s visit. 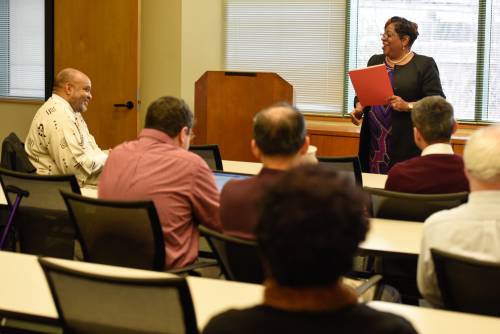 “God is incredible,” Pollard said, admiring the image. “That’s all I can say.”

But he had plenty to say about the communities outside his immediate and extended family.

Nearly a year ago, when a Louisville Seminary search committee first contacted Pollard, he felt compelled to tell them he’s not Presbyterian. The immediate reply, he said, was, “Yes — but we believe we can work with that.”

“It was that simple phrase that said to me everything I needed to now about the Presbyterian Church (U.S.A.) and LPTS,” he said. He concluded both are organizations “that understand that God comes with particularity and speaks to us universally.”

He also determined that “here was a community I could be in conversation with.”

Pollard said that in his work he affirms “the goodness of all people” and called justice “love in action.”

“All people belong to God, without exception,” he said. “We make exceptions, but God does not.”

While the seminary he leads has “Building bridges, engaging the world” as its mission statement, Pollard said he’s had to remind the seminary’s Board of Trustees there’s such a thing as physical and metaphorical bridges to nowhere.

“There are design flaws, you can run out of money — there are all kinds of reasons bridges end up going to nowhere,” he said. “We have a vague idea we want to get somewhere, so we keep building bridges. I’m about being particular,” in part because “in my DNA resides the Divine, and in everyone I encounter, the Divine is present.”

Present-day theological education must ensure that pastors and religious faith and thought leaders “aren’t speaking as what was being said once upon a time,” Pollard said. “Today’s world calls for more.”

Seminary faculty are taking their teaching skills outside the campus to engage clergy and lay people in the community and around the state and region, he noted.

“I am encouraging my colleagues to think anew, putting the people of God back into the center of our work,” he said. “There is so much good work to be done, so many grand opportunities.”