The March 2 party for Guru Nanak includes a talk, panel discussion and a free vegetarian meal 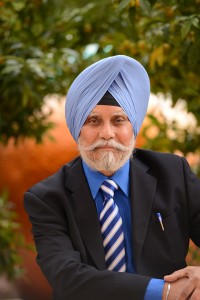 UPDATE: Seminary officials said Feb. 18 this event has been cancelled.

LOUISVILLE — McCormick Theological Seminary will co-host the celebration of the 550th birthday of Guru Nanak March 2 at the Lutheran School of Theology at Chicago.

Partners in the celebration include LSTC, Sikh Community Midwest and the Consul General of India.

According to a McCormick Seminary news release, the celebration runs from 2 p.m. through 5:45 p.m. and includes a free multi-course vegetarian meal. It’s being held at LSTC, 1100 East 55th Street and University Avenue in Hyde Park.

Dr. Pashaura Singh, Professor and Jasbir Singh Saini Endowed Chair of Sikh and Punjabi Studies at the University of California, Riverside, will be keynote speaker.

The birthday commemoration of Guru Nanak, the founding spiritual master of the global Sikh tradition, is an annual celebration in the Sikh community. McCormick’s involvement is in part the product of a longstanding relationship with Professor of Theology Robert Cathey and the greater Chicago Sikh community. Cathey first encountered Chicago’s Sikh community during a prayer vigil they convened in their Gurdwara (sacred house) in Palatine, Illinois shortly after the 9/11 attack.

The Sikh tradition appeared in India 550 years ago as a movement that practiced egalitarian hospitality toward all religions, castes and races. Guru Nanak is associated with the idea that one must be a human being first. Only then do the distinctions “Hindu,” “Muslim,” “Christian,” “Buddhist” or “Sikh” find their proper place.

Since the early 1990s, McCormick has enjoyed a fruitful partnership with the Sikh community in greater Chicago. Dr. Balwant S. Hansra worked closely with former McCormick President David Ramage;  with 1992 distinguished alumnus the Rev. Dirk Ficca; LSTC’s former president, the late Rev. Dr. William E. Lesher; and other inter-religious partners to bring about the 1993 Centennial Parliament of the World’s Religions in Chicago and the emergence of an international organization, the Council for a Parliament of the World’s Religions, where a number of McCormick students and graduates have served since the 1990s.

Ficca, the former executive director of the Council for a Parliament of the World’s Religions, will be a panelist for the event. Joining him are Dr. Peter Vethanayagamony, associate professor of Modern Church History at LSTC, Dr. Rahul Deepankar, a local Buddhist community activist; and Ajooni Sethi, Sikh spiritual advisor at the University of Chicago.

“We are so grateful to Dr. Hansra for his vision, his kindness and his longstanding relationship with McCormick and the wider interfaith community,” said McCormick Theological Seminary President David Crawford.  “We are honored to join with Dr. Hansra, the Sikh community in greater Chicago, the Consul General of India, CPWR and our friends at LSTC in this public commemoration of the 550th birthday anniversary of Guru Nanak.”

For those interested in attending, please RSVP by Feb. 25 with the number of people in your party to Jennifer Ould at jould@mccormick.edu or 773-947-6307.

A seminary in the city, McCormick is known around he world for its work in urban ministry, and for its cross-cultural, ecumenical models of theological education. One of 12 schools related to the Presbyterian Church (U.S.A.) and one of 11 members of the Association of Chicago Theological Schools, McCormick is a progressive leader in the Reformed tradition. Accredited by both the Association of Theological Schools and the Higher Learning Commission, McCormick seeks a more just and compassionate world through rigorous academic study, practical experience, spiritual formation and an active, engaged community.