#GivingTuesday – Join the PC(USA) in responding to a world in need! Give now!
Make A Donation Click Here >
Home › ‘May Christ heal us from our dis-ease’

The Rev. Larissa Kwong Abazia delivers a prophetic word during opening worship for NEXT Church’s gathering 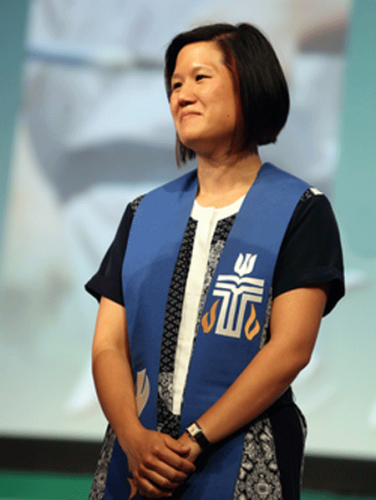 LOUISVILLE — In the midst of awful current headlines and centuries of injustice, God’s word for today came to the NEXT Church National Gathering underway at Montreat Conference Center from the Rev. Larissa Kwong Abazia, Vice-Moderator of the 221st General Assembly (2014).

Kwong Abazia preached during opening worship Monday to lead off a hybrid version of NEXT Church’s National Gathering. She is the founder of Courageous Spaces and works for NEXT Church as a coach and as the Coaching Training Coordinator. Kwong Abazia is member of the General Assembly Committee on Representation and also serves on the board of More Light Presbyterians.

Her scriptural texts were Esther 1-2:18, the story of Queen Vashti being deposed and Esther taking the throne “for such a time as this,” and Luke 8:43-48, Luke’s account of Jesus healing a woman who’d suffered for 12 long years from a flow of blood.

Kwong Abazia said Esther took the risk she did “because that’s the risk patriarchy would have her do in the shadow of Vashti’s ‘no.’”

“My siblings of color and I know this well,” she said. During the pandemic, “lockdowns and uncertainty were rampant for us all, but disproportionate amounts of people of color became sick or died because of Covid.”

“Work a little harder and people will see your work. Be patient. Your time will come,” people of color were told. “Trust me. Trust us. How can we trust systems never built for us in the first place?”

Now, as the country begins to open up, “the ‘nos’ of people of color resound around encouragement to not forget. Don’t fail to remember the senseless murders of Black and brown children … Don’t shield your eyes from the violence against [Asian American and Pacific Islander] people. Don’t go back to the way life was. Don’t yearn for what was normal.”

Here and in other places during her two-part sermon, worshipers responded to Kwong Abazia’s preaching with applause and affirming words.

“Friends, when will the cost no longer be high for us?” she asked. “When will there be peace in place of destruction? When will these ‘nos’ you are hearing from the margin be a collective call for ‘no more?’”

Worship was punctuated periodically by the music of worship leader and musician Gene Burke, minister of music at Salt & Light Church in Philadelphia, and other musicians.

After the gathering’s worship leader, the Rev. Casey Wait, pastor of John Calvin Presbyterian Church in Annandale, Virginia, recounted the story from Luke, Kwong Abazia wondered how much of the truth the woman had told Jesus when he asked who in the crowd had touched him. How her own community had denied care for her because of her bleeding? That her flow of blood marked her as unclean and no one would come near to her? The fact that she could never have children? “In the context of her time, if no one would marry her, no one would take care of her,” she said. Her body isolated her. Doctors took her money and left her with false hope. “Do you think she talked about the looks of pity that came her way? She was reminded she was a nothing in the eyes of everyone around her. With fear in her eyes, she looked at Jesus and dared him to take back the healing.”

Stories like this don’t end with the healing, Kwong Abazia said. “People would still approach her with hesitancy, and others would struggle just like she did,” she said. “There’s still a lot of work to be done to bring about change — not just for her but for those around her.”

Speaking the truth to Jesus “released her from the bonds of a system designed to keep her in her place,” Kwong Abazia said.

Even today, “the truth is that people of color can’t even go grocery shopping or to a salon or attend a church function without risking our lives,” she said. “Trans and queer youth and the people who love them are under legislative attack.” In addition, “we are destroying Creation immersed in the floodgate of desolation that we cannot turn the clocks back on.”

“The greatest truth I want you to hear is that I no longer want to be a part of this system. It’s just too broken,” Kwong Abazia said. “Maybe we’re too broken. We cannot policy our way into relationship in order to change it.”

“We refuse to be complicit,” she said. “We value life. We have stories that we have to muster all our courage to tell. Only then will we be healed of our dis-ease.”

“To my white siblings,” she said: “Your denial can last longer than six months [the length of King Ahasuerus’ banquet in Esther 1]. It can last a lifetime. People of color and people marginalized can’t wait for you to get it. Our lives are at stake. Do not unsee what has been right before you all along.”

“To my siblings of color: It’s time to move out of the shadow of the white gaze,” she said, and to “put our focus on relationship-building with each other. The system would have us believe we are isolated and alone. Our solidarity allows us to dream bigger. A new world is within reach if only we touch Christ’s cloak.”

“To each one of us: May Christ heal us from our dis-ease, allowing us to rest in the peace he provides, a peace that surpasses all understanding … and allow our whole truth to blossom into new life.”

“When will the ‘nos’ from the margins become the collective ‘no more?’ I think only God knows,” she said while offering a benediction, “and maybe for that I’m thankful.”

NEXT Church’s National Gathering continues both in person and online through Wednesday. Learn more about the annual event here.