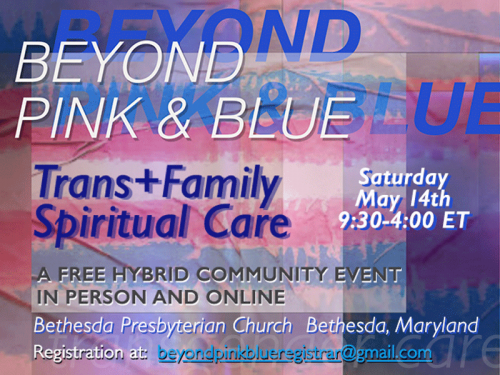 LOUISVILLE — Bethesda Presbyterian Church in Bethesda, Maryland, hosted the fourth-ever Beyond Pink and Blue: Trans+ Family and Spiritual Care conference on Saturday, attended both in-person and via Zoom by more than 70 people.

BPC’s pastor, the Rev. Chuck Booker, welcomed both crowds, announcing that National Capital Presbytery had helped fund the day-long event with a $1,000 grant. “I know hate will only win,” Booker said, “if people like us stand by and let it happen.”

Dr. Michael Adee, one of the conference organizers, said that “as a gay man navigating church and society [since 1988], this is not my first rodeo. What I want to confess and declare is transgender folks were mostly invisible in those [earlier] conversations.”

“It seems even more urgent to have those conversations today,” Adee said.

A conference keynoter, the Rev. Dr. Erin Swenson, said she didn’t come out as a transgender woman until 1995, “when I had to confront the Presbytery of Greater Atlanta with my gender identity. In 1995, the world was a much different place.” 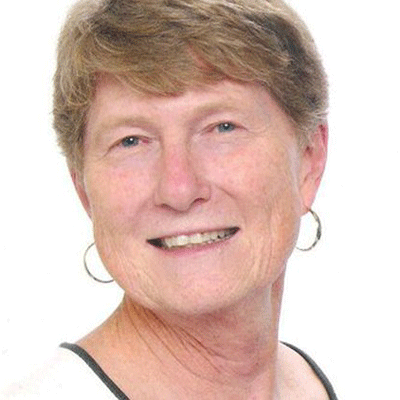 Swenson, a longtime pastor in the PC(USA) and licensed marriage and family therapist, addressed the topic of pastoral care for transgender people and their families. As a lead-in, Swenson talked about the three gender transitions “I have had so far in my life.”

The first was as a 10-year-old boy, “when I first realized I wanted to be a little girl.” Swenson had to “keep it a big secret. The secret hurt. It was painful. These days we would call it internalized transphobia.”

Swenson’s family began attending the Presbyterian church down the street, a church “that taught very clearly” about God’s power and omniscience. “To a boy who realized there was a secret in his heart, it was poison — except the other part was that God loved me, all of me, forever,” Swenson said. “It was very good Presbyterian theology, and I took that to heart.”

Swenson grew up and fell head over heels in love with a woman. They got married and had two children. “Life was good in every way except internally,” Swenson said. Swenson grew more depressed as the years went by. One day Swenson’s wife said, “When our children leave the house, I will be leaving too … She said, ‘I will always love you, but I can’t live with your depression. It’s killing me and my spirit.’”

That led to “my finally getting appropriate therapy” through Johns Hopkins University, the “first and leading gender transition clinic in the world.” Swenson’s therapist there, “a backslidden Roman Catholic from Prague,” told Swenson, “for a Presbyterian minister, you have little faith.”

“Her saying that tore me apart on the inside,” Swenson said. “She said, ‘You have a lot of people in your life who love you and you think they won’t tolerate who you really are.” That was Swenson’s second transition.

That transition was complicated — not the least of which was changing her name from Eric to Erin to continue her health insurance, an important consideration because one of her children was severely disabled.

Her third transition came after a newspaper documented her journey. A transgender woman named Ida phoned her after reading the article. The two met for breakfast and hit it off. At one point, Swenson told Ida, “It’s so wonderful to meet a fellow transgender Presbyterian,” one who played the piano and was contributing significantly to the life of her church. “No,” Ida told Swenson. “I love the Presbyterian Church, but I don’t think God wanted me to join the church — you know, because of who I am.”

“My head started spinning,” Swenson recalled. “All I could think was, ‘There was Jesus sitting across from me in that greasy spoon, talking to me.’ I thought of all the Presbyterians out there like me, like Ida, who couldn’t join the church because of who they are.”

“That was my third transition, to being an activist and ordained transgender Presbyterian pastor,” Swenson said.

The spirituality of transgender people is “widely misunderstood,” Swenson said. “For the last 25 years, I have had the privilege of seeing hundreds of transgender people in my practice.” Many grew up as church leaders, “and they are faithful to the church. When they come to me and say, ‘I don’t go to church anymore because it is such a painful place for me to be,’ it tears my heart out. These are people who could probably be leaders in our churches. Thank goodness they are starting to do just that.”

Swenson said families she works with show three distinct levels of acceptance toward their transgender members:

Swenson prayed to bring her presentation to a close, telling God, “Sometimes I cannot really know who I am. I question my steps and my thoughts. I wonder why I work so hard. I hope to please you and I live my life in ways designed to please you in every way I can. I thank you — we thank you — that just because of who we are, you are pleased.”

About 1.4 million Americans identify as nonbinary, Ojeda said. “Everyone’s gender journey is different, and everyone has a preference on pronouns,” Ojeda aid. “They should be able to determine how they’re referred to.”

“We all mess up” with pronouns, Ojeda said. “In most instances, we immediately correct ourselves. I always say, just ask the person. We want you to come to us and ask, and I always thank people who do. It’s good practice.”

Asked about resources for parents, Ojeda recommended pflag.org and glsen.org.

“There’s this insidious idea that sharing concepts of gender identity is abusive,” Ojeda said. “It’s important for youth to have a safe space to explore that and to understand they are the person running the ship.”

Smith touched on the current political landscape for transgender people and their families. At several points in his talk, Smith said taking the U.S. Trans Survey, found here, helps people of all trans identities, including binary and nonbinary, to make the survey “the main source about trans people for the media, educators, policymakers and the general public.” It includes information on health, employment, income, the criminal justice system and more. 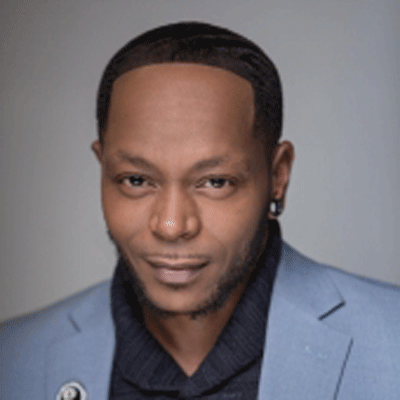 “The plan,” Smith said, “is not to change hearts and minds, but to give people a lived experience to think about. I challenge people here to examine your own biases so we can level the playing field.”

Smith called the 2021 legislative session “devastating,” with nearly 250 anti-trans or anti-LGBTQ bills introduced, with about 150 them designed to limit access to sports. In the end, 18 anti-trans bills were signed into law last year, according to Smith.

“In 2022, sadly, we are seeing the same trend happening again,” Smith said. “We’re seeing a chain of bills limiting how and what our educators can teach.”

Smith made sure to address trans allies during his recorded remarks. “Be intentional in your allyship,” Smith said. “I and our community are holding you accountable.”

What Smith finds heartening is “the joy the trans community experiences even in the face of adversity,” he said. “We have family and friends who love and understand us. I appreciate your bravery. Do not give up.”