Cantata asks, ‘How can one claim to know, or praise, God when they are oppressing their neighbor?’ 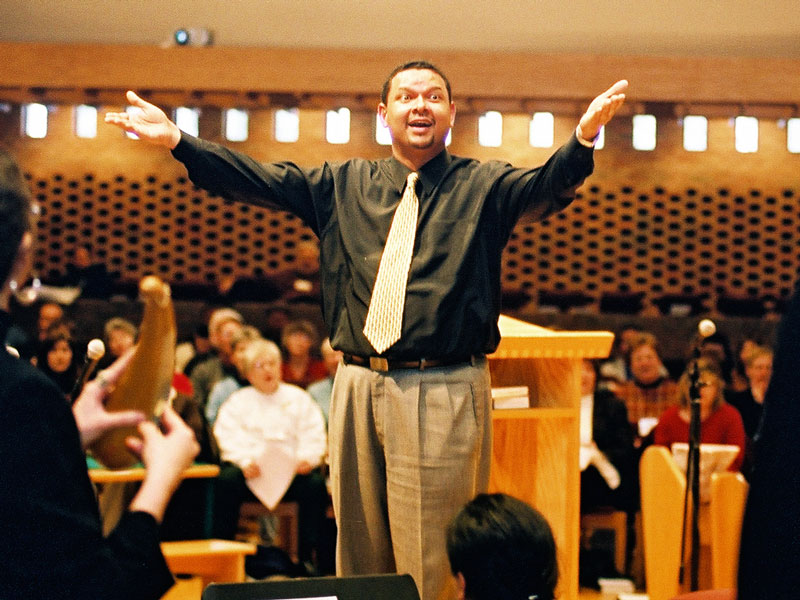 Jorge Lockward will lead a performance of the cantata “Manos Indocumentadas (Undocumented Hands)” at the Just Worship event at Austin Seminary, which will be held Sept. 30–Oct. 2. (Courtesy of laureville.org)

LOUISVILLE — Whenever Jorge Lockward does a performance of the cantata “Manos Indocumentadas (Undocumented Hands),” a strange sensation comes over him.

“Church leaders might be able to relate to this,” he says, “but once the word of God is inside of you, it needs to come out.”

So when he’s finished with the English language performance that will take place at the second annual Just Worship event (Sept. 30–Oct. 2) at Austin Presbyterian Theological Seminary, he’ll feel a sense of both privilege and relief.

Lockward, who is now the minister of worship arts at the Church of the Village in New York City, wrote and composed the narrative piece of music with Pentecostal Bishop Edith Alomar, who sings in an ecumenical choir that Lockward directs. Under his leadership, Cántico Nuevo visits and sings with detainees at the ICE Detention Center in Elizabeth, New Jersey, who are about to be deported.

And so, the narration of “Undocumented Hands” begins this way:

Every week millions gather at houses of worship around this nation. … Hymns, songs, prayers are offered.

Every week, millions live under the threat of deportation. They, too, offer their songs and prayers.

The stories of those about to be deported are woven throughout the cantata, along with the main character’s story, which was based on an encounter Lockward had in worship one Sunday. During a pastoral prayer at a New York City church he attended, a member of the church choir shared that her nephew had been found dead at the border.

“That was a rubber-meets-the-road kind of moment for me,” he said. “It marked me, because she spoke of it in such a nonchalant, almost disembodied kind of way. Yet she was still singing in the choir.”

Lockward, who served as the chairperson of the Worship and Liturgy Committee of the World Methodist Council from 2011–16, is delighted to present the cantata at Just Worship. He said that every time he presents it, he hears something fresh and new, which reaffirms his call to his life’s work — to listen to the biblical text and engage stories so that it becomes real to people, and not just an idea.

“Liturgy and worship,” he says, “are about telling the story of salvation and discerning what is deep in the heart of God.”

“Undocumented Hands” was revised in 2018 to showcase the broader trends in immigration enforcement under President Donald Trump. It now includes the stories of both an Ohio mother, Beatriz Morelos, and an Illinois town’s “beloved resident” Carlos Hernandez Pacheo, who has three young sons. Despite living in America for more than 20 years — and paying taxes — they were deported back to Mexico.

So in sections of the narration and cantata, you hear the voices of their stories,

(Narrator) “Beatriz Morelos left her house early on a Sunday morning to go to work. … Pulled her over for a minor traffic infraction… she was found to be an undocumented alien, she was detained, separated from her husband and four children, all of them legal residents of the United States…”

(Narrator) “Carlos Hernandez Pacheco of West Frankfort, Illinois, made the news when the members of his mostly white and conservative community rose to defend him as he faced deportation. … He had assisted so many in his community that even the law enforcement officials of the town petitioned the immigration judge for his release.”

(Domestic worker, model immigrant and deported mother) “I’m not just a stranger, I’m part of your life. It’s true I broke the law and I must pay the cost, but tell me why my children must be punished.”

Lockward says that for him, the cantata is both a theological and worship advocacy piece. For those who might consider the ideas in “Undocumented Hands” radical, Lockward says he is “simply claiming the power of Scripture.” He’s seen people who argue for obeying the law selectively quote pieces of Scripture they know while ignoring others, either out of convenience, or because they don’t know them.

“Most do not actually know all of Scripture that is crucial to its witness,” he says. “Particularly the quotes of Jesus that go back to the prophets.”

So, in a section of the cantata based on Hosea 6:6, one hears this:

Voz de Dios y Coro
¿Cómo dices que me amas?
¿Cómo puedes adorarme?
Aborreces y desprecias a tu prójimo.
Coro
Porque misericordia quiero y no sacrificios,
conocimiento de Dios más que holocaustos.
Voice of God and Chorus
You may claim to truly love me and pretend
to sing my praises, yet you harm, mistreat
and injure your neighbor.
Choir
Loving mercy, not sacrifice, is what I desire;
knowledge and honor of God instead of your offerings.

What Lockward is trying to say in the cantata is: “Don’t be confused; the most important thing is love for God and neighbor.”

“We have laws that actually oppress people,” he says. “How can one claim to know or praise God when they are oppressing their neighbor?”

Rehearsals for “Manos Indocumentadas (Undocumented Hands)” at Just Worship will be held on Monday and Tuesday mornings, Sept. 30 and Oct. 1. The performance of the 45-minute cantata is at 7:30 p.m. Oct. 1 at University Presbyterian Church in Austin.

To experience stirring preaching, exceptional music, fascinating workshops — and deepen your understanding of the essential connection between worship and the work for justice — click here to register for Just Worship.