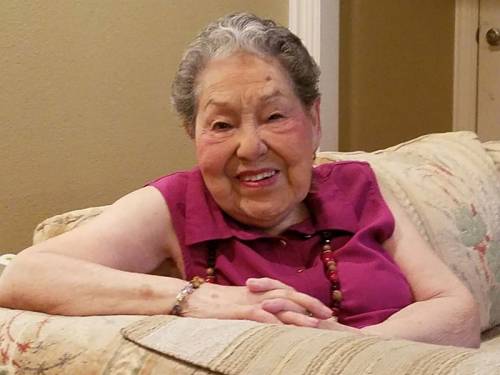 LOUISVILLE — Lydia Noemi Rodriguez Frias, a resident of Fort Worth, Texas, and a leader in the Presbyterian Church in the state, died Jan. 25. She was 94.

Born Sept. 7, 1925, in San Benito, Texas, she learned Spanish first, then English. Her grandparents were converted by Presbyterian missionaries and she attended Iglesia Presbiteriana Getsemani in San Benito. At a young age, Frias dedicated her life to serving God, a commitment she did not take lightly. She was known as a woman of strong faith and an active, lifelong Presbyterian.

After graduating from San Benito High School in 1945, she attended Austin College in Sherman, Texas, where she majored in Bible and graduated in 1950. She then attended the Presbyterian School of Christian Education in Richmond, Virginia. Later, back in Texas, she was employed by the Central Presbytery Office and worked with children in Hispanic Presbyterian churches in Dallas.

In 1947, she met her future husband, Juan Samuel (Sam) Frias, at Gethsemane Presbyterian Church in Fort Worth. Lydia and Sam married at Gethsemane in 1957 and made their home in Fort Worth, where Lydia volunteered to write letters in Spanish for patients at John Peter Smith Hospital. She then worked for 41 years for the Daycare Association of Fort Worth.

Frias served her local church, Grace Presbytery, the Synod of the Sun and the General Assembly as one of the first Hispanic female elders, working on many committees, traveling the world and representing the Presbyterian Church at all levels. She was active on the Hispanic American Ministries Council, where she focused on social justice issues and championed the rights of children. One of her more notable contributions was serving on a committee to unite the Northern and Southern Presbyterian Churches, ending a 122-year split that began during the Civil War.

Besides her husband, Frias is survived by her sons Steve (Lori) Lee of Austin, Dr. Sam (Jennifer) Lee and their daughter, Abigail, of Fort Worth, numerous nieces, nephews, cousins and their families. In lieu of flowers, the family asks that those who wish to contribute make a donation to Gethsemane Presbyterian Church or the Alzheimer’s Association.

Frias’s funeral is planned for Monday, Feb. 11, at 1 p.m. at Gethsemane Presbyterian Church, 960 West Bluff St. in Fort Worth.