Founder of community for trauma survivors to speak at 1001, Vital Congregations gathering Oct. 14-16 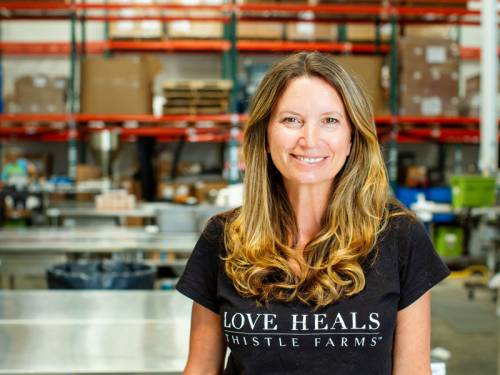 Becca Stevens, founder of Thistle Farms and the author of “Love Heals,” will be a keynoter during the 1001 New Worshiping Communities and Vital Congregations national gathering Oct. 14-16 in Kansas City, Mo. (Photo by Erica Baker)

LOUISVILLE — Becca Stevens, one of the keynote speakers for the 1001 New Worshiping Communities and Vital Congregations national gathering coming up October 14-16 in Kansas City, Mo., remembers how she felt when she started a residential community for women who have survived trafficking, prostitution and addiction.

Even though she was fulfilling a longing to open a sanctuary for survivors of trauma, like herself, she says she was “pretty messed up.”

Opening a residential home, Magdalene, for five women survivors in 1997 created a lot of triggers for Stevens, which were related to her own childhood.

An Episcopal priest like her father, Stevens was five when he was killed by a drunk driver.  Within a year she was being abused by a man from the church. While she didn’t confuse or blame any of that on God, those triggers made her feel, she says, like she was “stuck in the muck.”

Stevens now refers to those triggers as an uncovering, which were actually providing opportunities for her (and others) to continue to heal from trauma.

“An uncovering awakens something that I already knew deep down,” she says, “and allows me to see what is lurking in the shadow part of me.”

“I’m very surprised at how things turned out, and I thank God,” Stevens says. “But what I really get weepy over now — and I’m not just staying this — is how kind people, strangers, can be. Generally, people are pretty forgiving.”

Stevens’ biggest surprise is how powerful love is, and how quickly it can transform and heal.  Through the community at Thistle Farms, she’s discovered three things that have helped her — as well the survivors she has worked with — in the complicated but beautiful process of healing.

Having a real purpose in life, meaningful work, makes a person want to get healthy, she said. Having a supportive community is also critical, to help people know they’re not alone. Remembering that people need a lot of mercy and forgiveness is also important in one’s healing, she said.

“We are so hard on ourselves,” Stevens says. “We need a lot of mercy and forgiveness for others, but also for ourselves.” 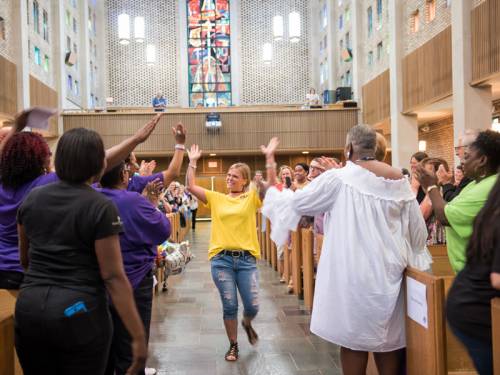 In her latest book, Love Heals, Stevens writes about the practical, relevant steps people can take daily so that they can focus on the healing work after trauma.  For communities, doing healing work, transparency, consistency and specificity — along with love and welcome— are critical factors, Stevens said.

“God’s desire for us is this kind of community,” Stevens says, “which is why I think I always knew that what I was experiencing as a child wasn’t about God — it was about messed up institutions and people.”

Stevens’ executive assistant at Thistle Farms, Kristen McWilliams, will join Stevens at the 1001/Vital Congregations national gathering to share some her story of healing that occurred at Thistle Farms.

“I had addictions and was living in abusive relationships,” she says. “I thought anything to do with life that had a happy ending wasn’t real.”

Her parents, including her mom, who Stevens says was “a huge enabler,” told her that if she didn’t enter Thistle Farms, they were going to give McWilliams’ two children up for adoption.  So, she became a resident at Magdalene, where she had a relapse four months in.

“That relapse was my wakeup call,” she says. “I discovered I really wanted healing for myself. That moment completely changed my life forever.”

McWilliams had time and space to heal and work on herself.  Eventually she regained some self-confidence.  As she began to love herself, she entered into a healthy relationship for the first time in her life.  After she got married and bought a house, she was able to gain custody of children. 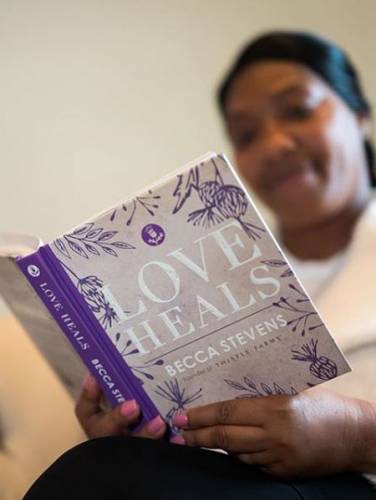 Stevens’ book “Love Heals” has been popular reading in the residential community for women who have survived trafficking, prostitution and addiction. (Photo by Peggy Napier)

While her healing has been a slow journey, McWilliams says she found salvation in the Thistle Farms community, through its support resources and also by experiencing other people who had walked the path before showing her the way.

One of those people is Stevens.

“Becca is the kind of person you want to be like,” says McWilliams. “Every time you’re around her you learn wisdom and patience and love. She’s my hero.”

Both Stevens and McWilliams will share stories at the national gathering along with ideas of practical ways for attendees to become part of healing communities.

“People need hope to do this work we are called to do,” Stevens says. “At this kind of event we can always end up being part of each other’s healing story, in new ways.”

To register for the 1001 New Worshiping Communities and Vital Congregations gathering, “Perspectives: The Church… Then… Now… Beyond” which also includes the Rev. Dr. Gregory Ellison of Fearless Dialogues as a keynote speaker, click here.