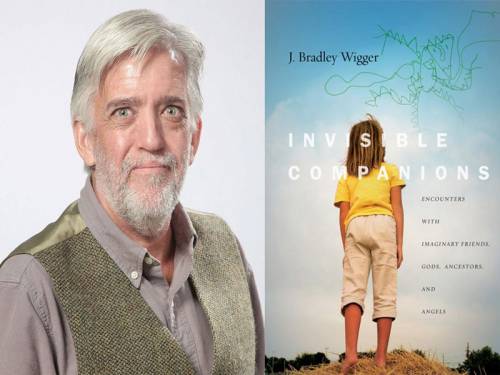 The Illumination Book Awards, now in its seventh year, honors the year’s best new titles written and published with a Christian worldview.

Wigger’s book explores the spiritual significance of imaginary friends of children among several different faith traditions from all over the world. From the United States to Nepal, Wigger traveled five countries on three continents to hear children describe their invisible friends ― 100-year-old robins and blue dogs, dinosaurs and teapots, pretend families and shape-shifting aliens ― companions springing from the deep well of childhood imagination. Drawing on these interviews, as well as a new wave of developmental research, he found a fluid and flexible quality to the imaginative mind that is central to learning, co-operation, and, paradoxically, to real-world rationality.

His research steps beyond psychological territory to explore the religious significance of the kind of mind that develops relationships with invisible beings. Alongside Cinderella the blue dog, Quack-Quack the duck, and Dino the dinosaur are angels, ancestors, spirits and gods. What he uncovers is a profound capacity in the religious imagination to see through the surface of reality to more than meets the eye. The book is punctuated throughout by children’s colorful drawings of their imaginary friends.

“This book is easy for me to celebrate because so much of it is about the kids interviewed and their stories,” said Wigger. “These children expand my imagination and deepen my appreciation for how sophisticated young minds are.”

Wigger has served on Louisville Seminary’s faculty since 1997. He teaches religious education and childhood studies at the seminary. An ordained Presbyterian minister and a recent Henry Luce III Fellow in Theology, Wigger has served churches in Colorado, Wisconsin and Mexico. His other recent publications include a picture book for children, “Thank You, God” (Eerdmans, 2014), and “Original Knowing: How Religion, Science, and the Human Mind Point to the Irreducible Depth of Life” (Cascade, 2012).