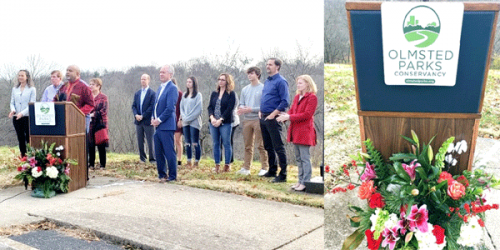 The property is located on the east, west, and south sides of the Seminary’s campus, bounded by Alta Vista Road and Beargrass Road. A portion of the property has Seminary residential housing buildings on the bluff overlooking the park.

“As we enter this holiday season, let us give thanks for the partnership with Olmsted Parks Conservancy. It is with great joy that we culminate this anticipated news in the spirit of Advent, and of all new beginnings,” said the Rev. Dr. Alton B. Pollard, III, seminary president. “The resources afforded to us by this sale will not only support the future and vision of what Louisville Seminary is called to be but will also ensure that God’s Creation will be stewarded by those who also have a deep commitment and understanding of LPTS values. The preservation of the land has by far been the focus since our initial conversations.”

Elizabeth Clay, who chairs the Louisville Seminary Board of Trustees, said, “When we first realized selling the property would be the best use of this resource, it was our hope that somehow it would become part of the Olmsted Park system. We are delighted with this outcome.”

The main entrance into the seminary will continue to be Barr Lane (currently middle gate). Access into the newly sold land will be off Chapel Valley Road, which turns into Landrum Way. Within 90 days of this close, excavation is anticipated on a portion of both those roadways. A new campus map will be released as soon as it is available.

Please direct any questions or concerns to presidentlistening@lpts.edu.