Remembering Pierce Buford, a veteran volunteer for Living Waters for the World and a former Presbyterian Foundation development officer 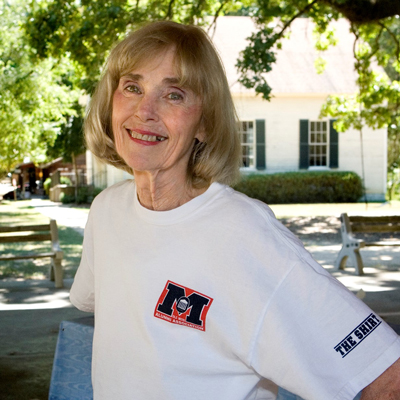 LOUISVILLE — When the world was thirsty, Pierce Buford gave it clean water.

She did so as a “cyclone of goodness,” in one friend’s words, whose passion, persistence and Southern hospitality knew few bounds.

After all, she said in a 2017 interview, everyone needs water.

Pierce Elizabeth Buford of Oxford, Mississippi, who died July 22 at age 80, was a veteran volunteer for Living Waters for the World. The Tennessee-based nonprofit, a ministry of the Presbyterian Church (U.S.A.)’s Synod of Living Waters, trains volunteers to help communities worldwide with water purification and health education.

Before that, she was a development officer with the Presbyterian Foundation from 1992 to 2001.

Once she became part of LWW’s efforts, Buford represented LWW at conferences across the country.

At the PC(USA) General Assembly, “she was the queen of the exhibit hall,” said LWW executive director Steve Young. “Everyone knew to come by the Living Waters for the World booth just to see Pierce, or she was going to track you down.”

For all her energy and lightheartedness, Young said, Buford struggled for years with health challenges. Having to orchestrate meal preparation from her wheelchair did not slow her down or dampen her enthusiasm, he said.

Kathy Vaughan and her husband, Jerry, were part of Buford’s exhibit team for Living Waters for the World. Vaughan recalled Buford pushing through pain and discomfort as they traveled. She carried a notebook of convention details and her medications and made sure Vaughan knew where to find it “in case I die tonight,” Vaughan said. “That was Pierce!”

On one trip, Buford was recovering from surgery on a broken hip. “Pierce nicknamed me ‘Cruella’ because I made sure she continued her therapy as we traveled that week. As her health declined and she was no longer able to travel, she often told me she needed a visit from ‘Cruella’ to push her into getting up and out,” Vaughan said.

“Pierce loved people, her family, LWW and her church,” she added. “Those are what kept her going after many would have given up.”

Something else Buford loved: Ole Miss. “She rubbed that in my face at every opportunity,” Young, a Mississippi State grad, said with a laugh.

She also took the opportunity to lend her development experience to Clean Water U, teaching potential water teams how to raise money for their efforts.

Maggie Hendrix, a friend and colleague from the Presbyterian Foundation, recalled that Buford loved working with then-Executive Vice President Bob Langwig. “He gave the two of us the freedom to develop our very different strengths so that we could successfully raise money to support the local churches and their missions,” she said.

The two often worked with the Rev. Dr. C. Kenneth Hall, moderator of the 200th General Assembly of the PC(USA) in 1988 and a minister at large for the Foundation.

“Ken told the jokes and preached, Pierce then said they should give and why, and I told them how,” Hendrix said. “We made a great team.”

Troy Marables, now Vice President of Human Resources at the Foundation, worked alongside Buford while he served as a Development Officer for the Presbyterian Foundation. “Her legacy was selfless service,” Marables said. “She also brought a great deal of joy and life to her work and was an inspiring person to spend time with. I enjoyed working with her and will always remember her encouraging spirit.”

Bringing joy to every cause

Young said Buford worked with Hall on another of her passions: peace in Northern Ireland.

To honor and remember her, LWW has established the Pierce Buford Fund for Clean Water U.

“She was all about stewardship being a joyful act as opposed to an obligatory one,” Young said.

Buford, who once described herself as a Martha trying to be more like Mary, brought that joy to everything she took on.