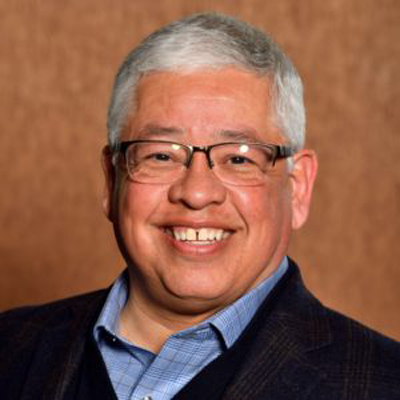 LOUISVILLE — The Rev. Dr. Edwin Aponte said his work involves living into his family name, which is Spanish for “bridge.”

Aponte, executive director of the Louisville Institute, was the guest Wednesday on the Facebook Live event presented nearly every week by the Rev. Dr. Lee Hinson-Hasty, senior director for Theological Funds Development for the Committee on Theological Education and for the Presbyterian Foundation.

“I’ve learned I can work in both the church and the academy to help bridge the two,” Aponte told Hinson-Hasty during the 30-minute webinar. “Part of what we do is help people think deeply about the specialized work they do.” The invitation, he said, is for leaders to explore “What are you thinking about? What keeps you up at night? We want to give folks time, opportunity and resources to think these through.”

Pastors selected for the Pastoral Study Project come to Louisville for two days each January to gather in plenary sessions and meet in small groups. “A lot of the work happens in small groups, when people share their projects,” Aponte said. “It’s not for a grade. It’s people in ministry sharing something they’re excited about.”

Pastors have told Louisville Institute staff that the small group support has been important as they launch their project and for years to come. “After the grant is over, they remain in community with people they met from across the country and Canada around their projects,” Aponte said.

“The money is good, and everyone is grateful for it,” he added. “But it’s really about the relationships that form.”

Collaborative inquiry Teams will begin their work this fall, he said. One that’s based in Nashville is looking at ways to transform churches and communities by addressing economic inequality. Other teams are studying how the church sometimes reinforces racial divisions. A West Coast team is imagining a more equal pulpit, Aponte said, by interviewing Latina clergy “who aren’t recognized for their ministry,” he said.

“The Louisville Institute funds research from all kinds of perspectives,” he said. “It understands religion in general and the different expressions of the church.”

The institute can be a resource “even for folks who don’t apply for a grant,” he said. “Even if someone doesn’t receive a grant, we are open to entering into conversations to help folks think something through.” That process, he said, often leads to completing an application for a Louisville Institute grant.

“Visit our website,” Aponte suggested. “There’s a lot of good analysis of the church in the United States, and there’s a good chance that research has been funded by the Louisville Institute. There are resources you may be using that you didn’t realize have a Louisville Institute influence.” 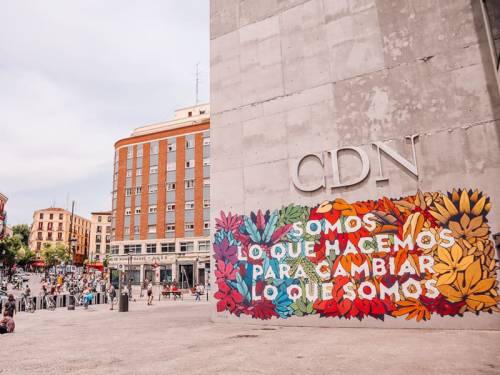 The mural at a transit stop in Madrid, Spain, quotes Eduardo Galeano, the Uruguayan journalist and writer. The English translation: “We are what we do in order to change who we are.” (Photo by Edwin Aponte)

Aponte concluded his conversation with Hinson-Hasty by offering a visual benediction, displaying the scene at a transit stop near the National Drama Center in Madrid, Spain. A mural features these words form Eduardo Galeano, the Uruguayan journalist and writer: “Somos lo que hacemos para cambiar lo que somos,” which Aponte translated as “We are what we do in order to change who we are.”

After quoting one of his favorite biblical passages — “Do not be conformed to this world, but be transformed by the renewing of your minds, so that you may discern what is the will of God — what is good and acceptable and perfect,” Romans 12:2 — Aponte offered up this Prayer of Self-Dedication from the “Book of Common Worship”:

so draw our hearts to you,

so guide our minds,

so fill our imaginations,

so control our wills,

that we may be wholly yours,

utterly dedicated to you.

Use us as you will,

always to your glory and the

welfare of your people;

through our Lord and Savior, Jesus Christ.