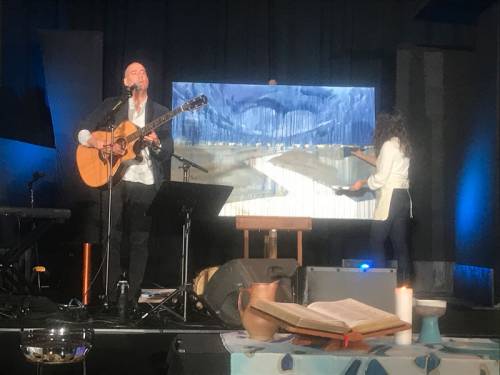 Musician David LaMotte plays while the Rev. Lisle Gwynn Garrity of A Sanctified Art paints during the Wednesday worship service that opened the annual gathering of the Association of Presbyterian Church Educators. (Photo by Mike Ferguson)

LITTLE ROCK, Ark. — With artist the Rev. Lisle Gwynn Garrity of A Sanctified Art painting on a large canvas as they worshiped, the 650 or so people attending the annual gathering of the Association of Presbyterian Church Educators opened their four days together Wednesday with a sermon by the Rev. Dr. Theresa Cho.

Preaching from Luke 10:1-11, the story of Jesus sending out 70 people in pairs to share the gospel, Cho, the pastor at St. John’s Presbyterian Church in San Francisco, focused attention on the two words that open Luke’s account: “After this.”

“We get the sense that something not so good is coming ‘after this,’” Cho said, adding that Jesus doesn’t sugarcoat the traveling instructions he gives the 70: “See, I am sending you out like lambs into the midst of wolves.”

With a nod toward the gathering’s “getting outside the box” theme, Cho set the bar higher than merely getting out of one’s church setting to share the gospel.

“It’s getting outside of our heads, our prejudices, our perceptions of others,” she said. 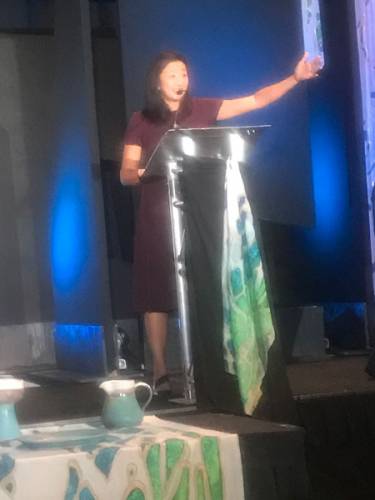 Bring nothing with you, Jesus instructs. Remain with people, eat and drink with them and “heal them so they know the kingdom of God is near,” Cho said.

She described the box she lives in, a town named for St. Francis, who spent his lifetime ministering to the poor, “and yet we have one of the (nation’s) largest wealth gaps. You can earn $200,000 (annually) and still live paycheck to paycheck.”

Hence, there are people “not in my box,” Cho said, including teachers, caregivers and first responders — and, increasingly, people of color who can be priced out of a housing market where a one-bedroom apartment costs upwards of $3,700 per month to rent.

God’s kingdom, she said, “is coming no matter what, whether we stay in the box or go out.”

Musicians Zach Light-Wells of Dallas and David LaMotte of Montreat, N.C., led music throughout worship while Garrity’s painting took shape throughout the service.

Attendees contributed to an offering to support Mercy Community Church in Little Rock. Founding pastor Bobby Williamson said a weekly service is held in the basement of a local Episcopal church, where members meet to cook and then enjoy food and conversation. “We don’t feed the homeless,” he said. “We share a meal together.”

Before worship, “we pull out the songbooks and the instruments. People play a drum or a cowbell,” Williamson said. “Sometimes it’s beautiful and sometimes it’s chaos, but it’s always a joyful noise.”

After worship the group joins for a community Bible study. “All of us reading the Bible together gives us a richer understanding,” he said.

The APCE national gathering runs through Saturday. Read an account of Wednesday’s presentation by a member of the Little Rock Nine here.