Voices cry out for liberty, justice and freedom 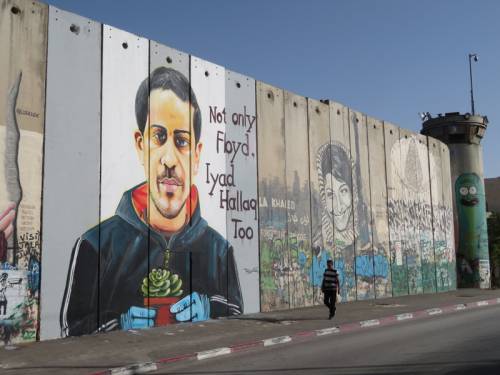 An image of Eyad Al-Hallaq was painted on the Separation Barrier inside Bethlehem by Palestinian artist Taqi Spateen. (Photo by Douglas Dicks)

ISRAEL-PALESTINE — In Israel-Palestine, temperatures are rising and so are tensions.

Israeli Prime Minister Benjamin Netanyahu had set a date of July 1 as the date for a major annexation of the West Bank territory, including the Jordan Valley, but coalition partner Bernie Gantz rejected the deadline.

With a growing sense of frustration in dealing with the White House, in late June, the King of Jordan, Abdullah II, took the case against annexation straight to senior members of the U.S. Congress. Utilizing the power of modern technology and through video link, the king pressed the case against a further Israeli annexation of Palestinian territory and warned that the consequences for the region would be dire. The Israeli daily Ha’aretz reported that the official statement was “mild” compared to the actual contents of the briefings themselves. 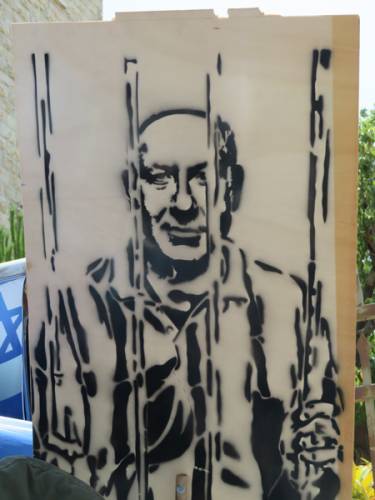 A protest sign outside of the Prime Minister’s residence in Jerusalem, depicting Benjamin Netanyahu behind bars. (Photo by Douglas Dicks)

The European Union was also vocal in warning Israel of possible sanctions, should Israel’s planned annexation go ahead. With the coronavirus raging in both Israel and the West Bank and Netanyahu facing charges of bribery, fraud, and breach of trust, the date passed like any other, with no full-scale annexation. This does not mean that the planned takeover of Palestinian land is over. But for now, the international pressure applied and the world’s preoccupation with the coronavirus pandemic seem to have put such plans on hold.

In the meantime, nightly protests in Jerusalem and just outside of the prime minister’s residence are calling for his removal, not only over the corruption charges but also over the current government’s mishandling of the coronavirus pandemic and the ensuing economic downturn that the country has taken. Currently nearly 73,000 cases have been reported and deaths are nearing 550 in a country with a population of about 8.9 million people — about the same as New Jersey’s, a state with a slightly larger land mass than Israel’s.

In the West Bank, many families continue to struggle with water shortages. With no tourists to fill the now-vacant hotels in Bethlehem, water should be in adequate supply. Yet, according to reports from the International Middle East Media Center, Israel has cut the water supply — not only to the Bethlehem region but also to other major cities in the Palestinian Territories, even as demand for water has increased by as much as 30%.

Mobile water tankers are trying to keep up with the demand of supplying Palestinian homes and multi-story apartment buildings with enough water to meet residents’ daily needs. Water has to be purchased since it is over and above what the municipality supplies. With such a huge economic decline this becomes a financial burden for families who cannot spare the extra money.

The killing of George Floyd on a Minneapolis street on May 25 resonated around the world, and for Palestinians, the brutality felt all too familiar. His death, and his last words pleading for air to breathe, shocked everyone who witnessed it as it played over and over on television screens.

Just days later, on May 30, Eyad al-Hallaq, a 32-year-old autistic Palestinian man, was shot and killed by Israeli police just inside Lions’ Gate in the Old City of Jerusalem. Israeli police say that he did not stop at a checkpoint after being ordered to do so by officers stationed nearby.

Eyad’s teacher, who was with him at the time, begged the officers not to shoot, telling them that he did not understand. He was shot and killed inside an open-air garbage holding area. The investigation into his killing claims that none of the security cameras that are positioned on and around this area were working at the time and no footage was available to corroborate the story that he was not carrying anything lethal or harmful, except for a gift that he was taking to his school. 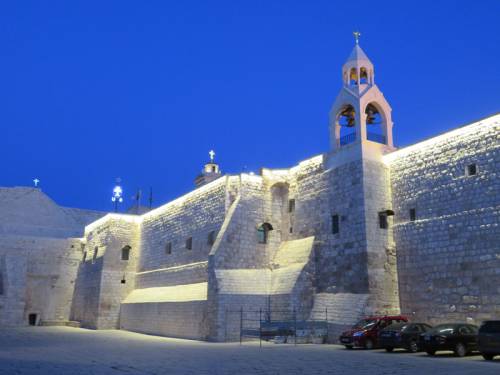 The Church of the Nativity in Bethlehem stands empty against a blue sky just after dusk. Tourism has come to a complete standstill due to the coronavirus pandemic. (Photo by Douglas Dicks)

The deaths of the two men, only days apart, have raised a new awareness among people of conscience everywhere. Each stands separate and yet, in the larger scheme of things, speaks to a world that has become, all too often, out of touch with its own humanity.

In John 10:10, Jesus reminds us that “The thief does not come except to steal, and to kill, and to destroy. I have come that they may have life and that they may have it more abundantly.”  Our Lord and Savior, Jesus Christ, stooped down to raise up the people of his day who were ignored, left out and marginalized by society.

May those voices that cry out to breathe freely become shouts of freedom, justice, and liberty for all of God’s Creation. 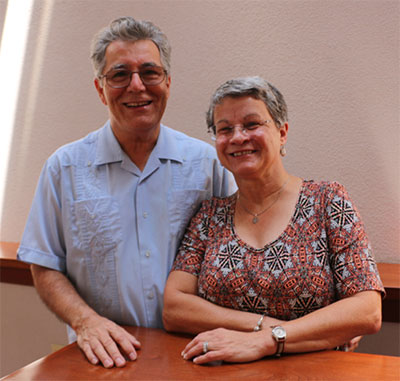