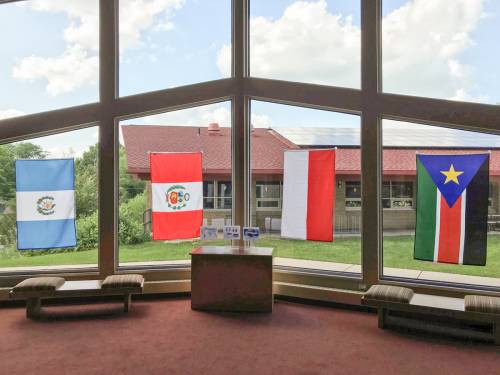 Covenant Presbyterian Church is displaying the flags of Guatemala, Peru, Indonesia and South Sudan during its four-week mission emphasis this month. (Photo provided)

LOUISVILLE — Congregants at Covenant Presbyterian Church in Madison, Wisconsin are getting a snapshot of four countries around the world this month through the lens of Presbyterian mission work.

The ministries of Presbyterian mission co-workers in Guatemala, Peru, Indonesia and South Sudan are being highlighted in worship during the first four Sundays in July. On July 1, Pastor Charlie Berthoud shared about the work of Sandi and Brian Thompson-Royer in Guatemala and last Sunday he talked about the ministry of Jed and Jenny Koball in Peru.

The congregation will hear from Bernie and Farsijana Adeney-Risakotta, who serve in Indonesia, this Sunday and from Leisa Wagstaff, who serves in South Sudan, the following week.

“It is a celebration of what God is doing through the Presbyterian Church,” said Berthoud. He added that it is also a time of education about the church’s global work and a call to action. “On the first Sunday I ended by saying that not everybody is called to go to Guatemala, Peru, Indonesia or South Sudan, but we are all called to do mission work.”

This conviction, he said, is summed up in a brief statement that the congregation adopted as “Our Calling.” It urges: “Learning God’s Love, Living God’s Love.”

In addition to participating in local mission and supporting global mission financially, the congregation has had direct mission involvement in Guatemala. Through a mission partnership established in 2002, Covenant members have built relationships with Guatemalan Presbyterians and have become acquainted with mission co-workers who serve in Guatemala, including the Thompson-Royers. Covenant has worked with Guatemalan Presbyterians on education, water purification and church development projects.

When Berthoud spoke about the Koballs’ work in Peru, his words were based on his recent interaction with the couple. While on sabbatical leave, Berthoud, along with his two teenaged sons, visited Peru and learned about Jed Koball’s efforts with Peruvian partners to address environmental contamination and other issues that contribute to poverty in Peru. This work is part of the Presbyterian Hunger Program’s Joining Hands initiative. Berthoud and his sons also became familiar with Jenny Koball’s ministry as a site coordinator of the Presbyterian Young Adult Volunteer program.

The Adeney-Risakotta’s visit to the congregation is a result of a 2017 mission emphasis at Covenant. On World Communion Sunday in October, in addition to receiving the Peace & Global Witness Offering, the congregation distributed prayer cards of numerous mission co-workers to worshipers. They were urged to take the cards home and pray for the co-worker and possibly contact them through email.

One member contacted Bernie Adeney-Risakotta and learned he had lived in Madison while he was a university student. Bernie mentioned that he and Farsijana would be visiting the United States in 2018 and began the process that led to their invitation to speak to the congregation. Bernie and Farsijana teach at Duta Wacana Christian University and are involved in several ministries to build positive Christian-Muslim relations in Indonesia, the world’s largest Muslim country.

Wagstaff has received financial support from Covenant for several years, but she has never had the opportunity to visit the congregation. She will talk about her work as an educator in South Sudan, the world’s newest country and one its poorest.

Berthoud hopes the emphasis will help Covenant members “live with intentionality and purpose, trying to make God’s kingdom come and God’s will be done.” It’s a responsibility that begins in the local community and extends to the entire world, Berthoud said. “Given the state of the world today with so much political friction, I think it is vitally important that Christians have a good understanding of the world around us and be bridgebuilders and peacemakers.”

Covenant’s mindfulness of international mission was evident during a recent capital campaign. The congregation secured funds to replace its roof and install solar panels and tithed a tenth of the money it raised to various mission projects. The causes it supported included Presbyterian World Mission, which received a $7,000 gift. 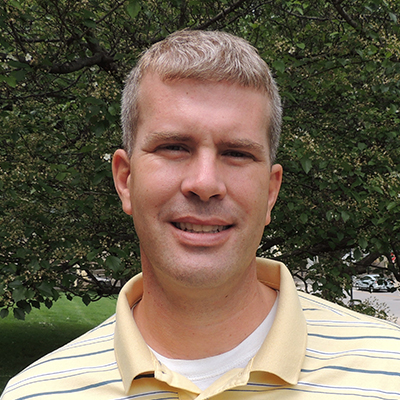