EAST TEXAS — On the first full day of kin-dom camp last week, it was evident the impact the camp would have on the 57 campers who identify as LGBTQIA+.

One of the campers came into the camp anxious. At school they usually go into the corner of a room and watch everybody else communicate.  But here they became friends with the first person they met.

“I’ve never seen a cross with a pride flag on it,” they said. “I don’t think anything in me has changed yet. But I’m happier now. It’s crazy how that happens.”

This week-long camp at Camp Gilmont was sponsored by the 1001 New Worshiping Community kin-dom community.  In 2020 kin-dom’s leader, the Rev. Pepa Paniagua, got a call asking if she’d come to Camp Gilmont to baptize Andy Hackett. 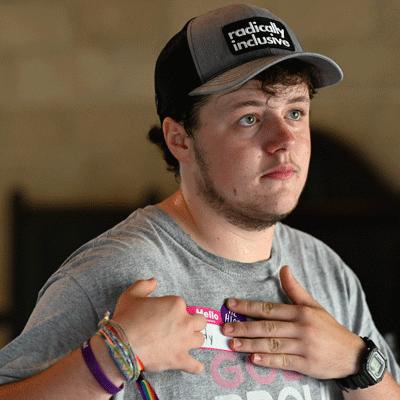 “My parents were like, ‘Be careful. Tread lightly, because you’re not in a very supportive area,’” Hackett said.

But after meeting Paniagua, the Bible study leader at the camp that week, and Garrett deGraffenreid, who knew him before he was named Andy, Hackett knew he was going to be OK here.

“I never really had a safe space to explore my faith. But in my second year on staff, I felt really led to get baptized,” he said.

During his baptism, Hackett felt his whole self-affirmed, including his new identity.

So, he began talking with deGraffenreid about having a week-long camp exclusively for youth in the LGTBQIA+ community. 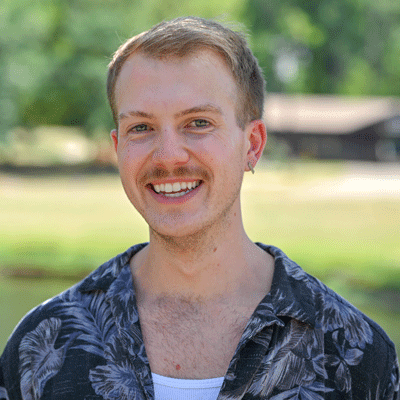 deGraffenreid told Hackett to talk with Paniagua, one of the first queer pastors he met in middle school whom he considered a mentor and friend.

“If there was one person who would say ‘yes’ to this it was going to be her,” Hackett said. “She’s been fantastic to have on our team for the week.”

Hackett calls it “a 100% God thing” how kin-dom camp came together since his baptism. In his first year of college, he wrote a paper for his English composition class on how camp could positively impact the LGBTQIA+ youth community. Then as a final project for the class, he turned it into a proposal for the Gilmont board to host the camp. 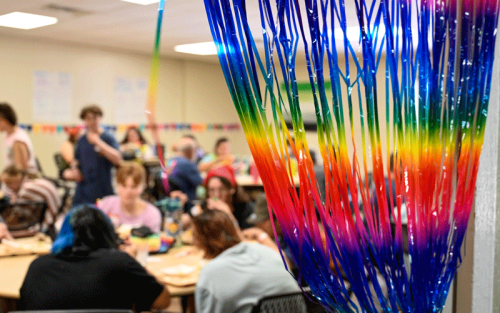 According to the Rev. Kendal Land, when Paniagua and Hackett came to Gilmont with the idea for kin-dom camp, it made total sense. Speaking on behalf of Grace Presbytery, he said after meeting with campers it was clear they previously didn’t have positive experience at camp because they couldn’t be their authentic selves.

“Camping is one of those places where kids get to really hear God in a way they haven’t heard God before,” he said. “Now they’re together with others who are like them, and they feel safe, which is exciting to me. I’m happy the presbytery sees this as a very vital ministry.”

As word has spread about kin-dom camp, other places began asking, “How can we do this on our site?” Paniagua is in conversation with other Presbyterian camps and conference centers to see how kin-dom camp could be offered in a variety of contexts.

“One of the things we’ve learned is that some of these kids have never met another gay kid, let alone a queer adult,” she said. “Here they can come and just be a kid in a world that is not designed for them. I don’t think any of us on staff anticipated the emotional joy that we would get being in the space we created for them.” 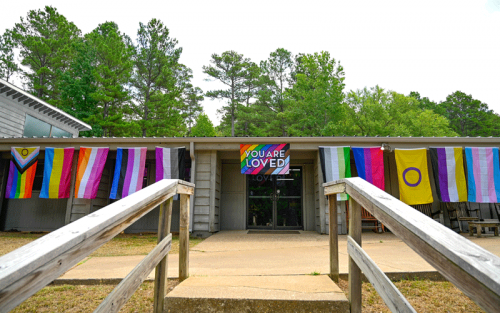 “You are loved” signs showed up everywhere at kin-dom camp. (Photo by Rich Copley)

The thing Paniagua keeps hearing from all the adults here is this: “We wish they would’ve had a camp like this when they were kids.”

For one of the campers, “kin-dom camp feels like science fiction” because it is so different from their regular life in Texas. This person went to a weekend summer camp with their karate group, where there was a mandatory morning church service before they went kicking on the beach.

“Texas is kind of Bible-belty,” they said. “But here at this historically Presbyterian camp, every time Scripture comes up, they make sure everyone knows they’re trying to use it in an affirming and very supportive way. I like that they do a good job supporting, but not forcing, any spirituality.”

Look a for a video this month on kin-dom camp that will feature campers, staff and volunteers, along with leaders from Camp Gilmont, Grace Presbytery and the Synod of the Sun.