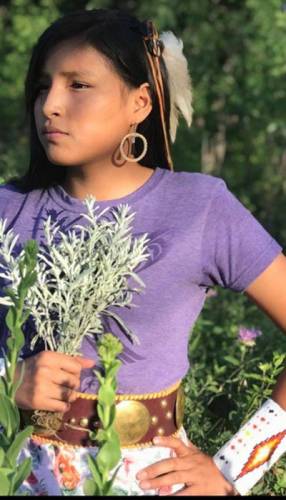 Owe Aku is a grassroots nonprofit organization that champions putting its people in charge of their own food supply, nutrition, health and well-being by reclaiming ancestral wisdom and teaching Lakota history and culture.

“Just hearing what their context is, learning about how they are approaching their huge challenges around food, poverty, and preserving and restoring the traditions that their people have held dear for centuries and centuries, for us it’s a chance to really learn from their struggles and their approach to resolving the challenges they face,” said Kang Bartlett. “I think much of our advisory committee and certainly our staff think about our ability to support groups like Owe Aku as a small, symbolic step toward repairing centuries-old harm that settler culture — white culture — has inflicted on people.  We see our grants as a kind of reparation toward hopefully reconciliation and healing on all sides.”

The garden project, which has several components, began with family garden plots where members were provided with plants and gardening instructions. This year, families will start learning how to can and preserve their own food so that it can be used throughout the winter months. 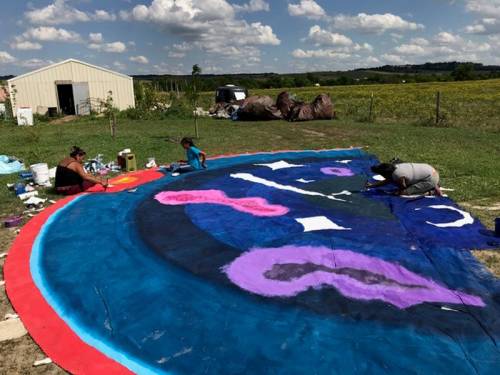 During the months that Pine Ridge has been in lockdown because of the coronavirus, the garden project has faced a minor setback since the organization is unable to focus on as wide an area as it had previously. Fortunately, the program has been able to continue uninterrupted among the tiyospaye, a Lakota word for extended family or core community. Owe Aku’s tiyospaye is composed of a dozen or so homes with about 35 children in total, including Trinity, her twin brother and her other eight siblings, of which she is the eldest girl.

“Trinity has become a leader in AFS during the pandemic,” Lebsock said. “Our programs there help to keep the young people focused during these challenging times. Trinity attends and assists with every class and workshop put on by Owe Aku, and, in turn, she and the other students have begun to teach their families.”

Another area that Owe Aku has been focusing on is building the infrastructure within the tiyospaye, starting out with a farm building that it converted into a multipurpose classroom with a small kitchen, so that the community can make meals.

Last year, when Pine Ridge’s spiritual leader, Rocky Afraid of Hawk, died suddenly and unexpectedly, Lebsock said it was a real blow to the community. “But to see Trinity and the other young people very much involved in his funeral preparations, and to watch them stand up and take control of a lot of the work was just so uplifting for myself and the late Deborah [White Plume] and the elders, who had been doing the work for so long.”

Not just an adept gardener, the seventh grader is also proving herself to be gifted in other areas that benefit the Reservation. She has become an invaluable part of the administration, helping Lebsock with bookkeeping and other office work as he prepares to scale back his own responsibilities.

“I want to learn my traditions from Ama’s Freedom School,” Trinity said, “so that I can keep them alive for the future generations.”

Across the PC(USA), church leaders — including Ruling Elder Elona Street-Stewart, Co-Moderator of the 224th General Assembly (2020) — are encouraged by such partnerships with Indigenous organizations. Street-Stewart is a descendant of the Delaware Nanticoke tribe and the first Native American to serve as a General Assembly moderator as well as a synod executive, Lakes and Prairies, in the PC(USA).

“This is an exciting effort to revitalize their Indigenous language and protect and share their tribal values and cultural traditions across the generations,” said Street-Stewart. “In addition to the construction, they are respecting the relationships between the Creator and the land, honoring the resilience and strength of their ancestors, and remembering the culturally specific food and economic generosity that guided their survival.  Blessings on the vision to reclaim their Indigenous life ways and step out of the colonial systems that dominate and impoverish their children and elders.” 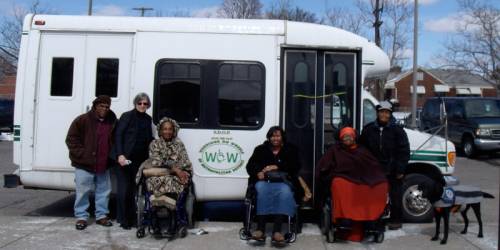 One Great Hour of Sharing gifts help empower individuals living with disabilities through the Warriors on Wheels of Metropolitan Detroit program. (Contributed photo)

In Detroit, One Great Hour of Sharing gifts also help to empower individuals living with disabilities through Warriors on Wheels of Metropolitan Detroit. Thanks to a grant from the Presbyterian Committee on the Self-Development of People (SDOP), the organization is raising up leaders who are advocating for equal opportunity and full inclusion for people with disabilities as well as actively speaking out to require that communities be ADA (Americans with Disabilities Act) compliant.

“Warriors on Wheels is the embodiment of our SDOP criteria,” said the Rev. Dr. Alonzo Johnson, coordinator of the Presbyterian Committee on the Self-Development of People. “People living with disabilities are more likely to be homeless or to have a mental illness. Warriors on Wheels recognizes that people need to be in control of their own destinies.”

In Immokalee, Florida, the Coalition of Immokalee Workers (CIW) — a worker-based human rights organization with its roots in farmworker community organizing — is partnering with Presbyterian Disaster Assistance (PDA) to ensure that its homegrown leaders continue to organize for basic human rights.

“The grants that we made to CIW were done to protect those who grow, harvest and make food available,” said Jim Kirk, associate for Disaster Response (U.S.) for PDA. “Because farmworkers are considered essential but are often treated like they are expendable, the grants that CIW receives through the One Great Hour of Sharing Offering show that we care about the people whose labors lead to our sustenance.”