The Rev. Laura Mariko Cheifetz offers wisdom for those doing antiracism and other activist work 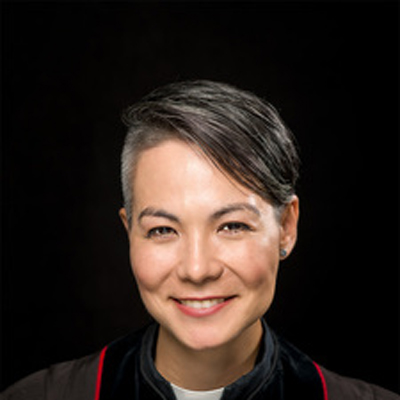 LOUISVILLE ­— With each of his guests on the podcast Leading Theologically, the Rev. Dr. Lee Hinson-Hasty opens with the same question: what is making you come alive?

On Wednesday, the Rev. Laura Mariko Cheifetz, a PC(USA) pastor and the assistant dean of Admissions, Vocation and Stewardship at the Vanderbilt University School of Divinity, had a ready answer.

“It’s about the flourishing of people in the fullness of who they are,” she told Hinson-Hasty, senior director for Theological Funds Development for the Committee on Theological Education of the Presbyterian Church (U.S.A.) and the Presbyterian Foundation. “That’s why I’ve done so much work on racial justice. As a person of color I can perceive the ways lives are stunted by white supremacy,” both people of color and white people.

“That’s why I like working with people in the discernment process,” Cheifetz told Hinson-Hasty. “We all have something we are meant to do that makes us come alive.”

During the half-hour podcast, the two discussed “Race in America: Christians Respond to the Crisis,” a book that Cheifetz has edited together with the Rev. David Maxwell, vice president at Presbyterian Publishing Corporation. Originally published in 2016 as “Race in a Post-Obama America,” this updated edition offers contributions from a diverse group of pastors, professors, and activists on the history of racism, the issues of racism today, and action plans for moving toward antiracist work and racial justice. Updated material addresses police and police brutality, the ongoing work of Black Lives Matter, and Black protests. New chapters examine racism in relation to immigration and digital media.

Cheifetz told Hinson-Hasty she’s “very cisgender, and even though I am queer people often read me as straight. I am biracial Asian American and white Jewish, and I’ve learned to be kind and diplomatic. If people can hear me — if I can help amplify points that people are unable to hear from other people — then it’s something I can contribute.”

“You really are that bridge, a threshold kind of person,” Hinson-Hasty responded.

“When someone brings something to my attention,” Cheifetz told him, “I can refocus and reintegrate new learnings to better nuance what I think I know, which is the task of a decent person and especially a decent minister.”

When Hinson-Hasty said the book is probably intended to be read “with others in small, trusted groups,” Cheifetz said it was always Maxwell’s intention that the work “be accessible to people. It’s grounded in solid theory, and it escapes the binary thinking. Education does not solve problems of racism,” but following the murder of George Floyd and police killings of other people of color including Breonna Taylor, “people are now in a different space to acknowledge what has always been.”

For most people, antiracism work “is not something that happens in the head,” Hinson-Hasty said. “It is in the heart, hands and feet, in actions and in words. If you’re really going to do the work, it’s not just reading a book.”

That’s true, Cheifetz said, but many people “feel trapped because they don’t know enough. None of us does. We’ve got to go out there and make mistakes. I’ve had plenty of bad experiences, but they helped me learn and grow accountable in my relationships. There is always more to learn. You can read, do things, apologize and repair the damage if you make mistakes.”

“It seems worse just to sit there and not engage the work,” she said. “To keep it all internal, I think you will miss out on the integration of the work.”

The work doesn’t necessarily have to occur through protest, Hinson-Hasty said. “It’s also your checkbook and your budget — how you spend your time and money.”

“It’s like [the variety of] spiritual gifts,” Cheifetz said. “Some absolutely need to be on the protest line. Others are really good at policy, and others can show up at City Hall and slam the budget plans for overfunding the police and underfunding social services. We all enter the work at different points. It’s like the laborers in the vineyard. We need those 5 o’clock arrivals, too.”

During her charge to conclude the podcast, Cheifetz told viewers that “Everything is terrible, like all the time. But everything is wonderful most of the time too. Keep a sense of wonder and be fueled by the understanding that too many people are robbed of that wonder.”