‘God seems to be tapping me on the shoulder,’ she says 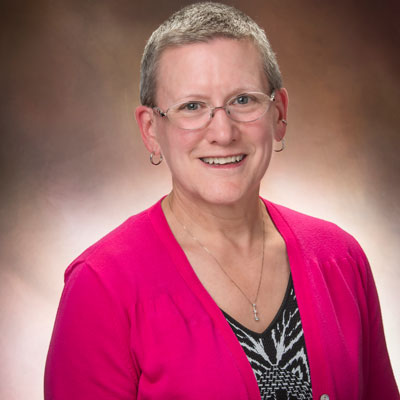 Kathy Lueckert is the A Corp Board’s choice to be A Corp president. Her election must be confirmed by the 224th General Assembly. (Contributed photo)

LOUISVILLE — The Presbyterian Church (U.S.A.), A Corporation Board of Directors voted Tuesday to name Kathy Lueckert as president of the A Corporation, subject to confirmation by the General Assembly.

Lueckert, 61, will lead the corporation, which is the corporate expression of the PC(USA). She’ll report to its 11-member board and manage what is currently known as the Administrative Services Group.

“God seems to be tapping me on the shoulder,” said Lueckert, according to a Presbyterian Mission Agency news release. “Friends encouraged me to pursue the position, and once I learned more, I realized it was a perfect fit. No one is more surprised than I am to find myself in this role. God sure has a good sense of humor.”

“I am excited to return to Louisville to be a part of the changes to A Corp. and the Church I love so deeply,” Lueckert said in the news release. “I look forward to rebuilding old relationships and starting new ones as A Corp helps ministry flourish.”

Pending GA approval, Lueckert receives a four-year term which begins Aug. 12. The A Corp Board is recommending that commissioners to the 224th General Assembly confirm the election.

Reached by telephone minutes after the Board’s announcement, Lueckert said she expects “to listen a lot” to clients, staff and the Board “to get a good feel for the challenges and opportunities” the A Corp faces. “I know (the A Corp’s) rebirth has not been without labor pains, so a lot of listening is in order.”

Among her to-do list will be “filling some key vacancies,” including the chief financial officer,  a manager for Translation Services, and the general counsel.

“Filling this role was a priority for us so that we can continue to provide support for essential Church functions,” said A Corp Board Co-Chair Bridget-Anne Hampden. “It was a blessing to find someone as talented as Kathy, who not only has the collaborative skills necessary to run a complex organization, but a deep love for the Presbyterian Church.”

“In the midst of doing church there is a need for hope and possibility,” said Nelson. “Kathy is a familiar face around here, and the gifts she brings can lead us to a new way of thinking about how the church might work together with a renewed spirit of collaboration.”

“The Holy Spirit moves among us making connections, guiding minds, inspiring hearts and nudging us into action,” said Moffett. “I believe the Holy Spirit was instrumental in bringing Kathy back to Louisville and in a role where her gifts will help build up the realm of God.”

“I’ve had the best job in the world,” she said. “Village Church is a great church that’s doing great things in Kansas City and around the world. God kind of tapped me on the shoulder, and maybe I shouldn’t ignore that tap.

Prior to her work at Village Presbyterian, Lueckert served as the Director of Strategic Projects for World Vision, a $2 billion Christian humanitarian aid, development and advocacy organization operating in 100 countries. From 2005–06, Lueckert worked as the corporate services director for the City of Seattle.

From 1999-2004, Lueckert was deputy executive director of the General Assembly Council, the forerunner of the Presbyterian Mission Agency. According to November 2004 reporting by the Presbyterian News Service, she left the GAC in late 2004 following her involvement in a fact-finding trip to the Middle East that included a televised meeting with Hezbollah.

In an email, Chris Mason, the Board’s other Co-Chair, said, “We thought it was fair to ask Kathy about her experience 15 years ago — even though it was 15 years ago and the work of A Corp. is very different.  We saw she has learned and changed a lot since then, and her references — some of whom addressed this directly with us —confirmed this.

“Kathy sees a good lesson for all of us in her experience.  You have to be culturally sensitive not just to those whom you do not know well, but equally those with whom you have had good relationships for years.  We are glad she is going to bring that wisdom with her when she joins A Corp.”

Lueckert said that helping ministry flourish “is what it’s all about” and expressed excitement “to come on board.”

The A Corporation is the principal corporate entity of the PC(USA). It owns the real property and other assets not managed by the Presbyterian Foundation and provides treasury and administrative support for the denomination, including, for example, employing all the staff of the Presbyterian Mission Agency, the Office of the General Assembly, and its own Administrative Services Group. Kerry Rice, Deputy Stated Clerk with the Office of the General Assembly, has served as acting president for the A Corporation since March. The A Corp Board offered Rice its “deep gratitude and thanks” for his interim leadership.