by Board of Pensions | Special to Presbyterian News Service 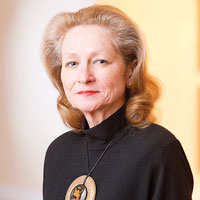 PHILADELPHIA — Judith D. Freyer, who has overseen investments for The Board of Pensions of the Presbyterian Church (U.S.A.) for more than three decades, has announced that she will retire as executive vice president, treasurer, and chief investment officer effective July 31.

“When Judy arrived at the Board of Pensions in 1988, the Balanced Investment Portfolio was valued at around $2 billion,” said the Rev. Frank Clark Spencer, Board president. “Since then, nearly $6.4 billion in payments have been made to pensioners and survivors and, at the end of 2019, the portfolio was valued at more than $10 billion. In more than 30 years, thousands of Benefits Plan members, retirees, and their families have benefited enormously from Judy’s diligent stewardship.”

Freyer joined the Board in November 1988 as assistant treasurer and, in 1990, was promoted, becoming the first woman in the role of treasurer. Previously, she had worked 12 years at UGI Corp. in finance, pension plan investment portfolio management and investor relations. From 1973 to 1976, she worked for the U.S. Department of Defense in Nuremberg, Germany.

“Judy’s path to the Board was as the rare woman in a field dominated by men,” said Executive Vice President Susan Reimann, chief operating officer at the Board. “Her achievements in an arena that even today has few female executives is due to her intelligence, persistence, and, most of all, her spirit.”

She was named vice president of investments and treasurer in 1990 and chief investment officer in 1999. Spencer promoted her to executive vice president in 2016, recognizing her “past contributions and continuing work on the overall strategy and policy of the Board of Pensions.”

Since 1990, Freyer has served as the Board of Pensions staff representative to the Committee on Mission Responsibility Through Investment (MRTI), which implements the policies of the General Assembly of the PC(USA) on socially responsible investing. She has participated in corporate engagement matters involving supplier standards, the Equal Employment Opportunity Commission, water use in the manufacture of computer chips, Israel-Palestine issues, human trafficking and fossil fuels.

In addition to meeting with corporations in which the Church holds stock, MRTI representatives travel to see the effects of poor corporate stewardship on marginalized communities — from the working conditions of South Asian factories to the contaminated air, water, and soil of Midwestern towns that are home to heavy industry. “With MRTI, I have witnessed firsthand injustice around the world and have been part of an organization with the commitment and authority to address it,” Freyer said.

For more than 25 years, Freyer has wielded her professional skills and talents to act on a strong sense of social responsibility, serving tirelessly as a director, committee member, and chair of numerous nonprofit endowments and foundations — Curtis Institute of Music,  William Penn Foundation, Ministers and Missionaries Benefit Board (MMBB) of the American Baptist Churches USA, The Library Company of Philadelphia, Lantern Theater Company, American Red Cross in Washington, D.C., Cradle of Liberty Council of the Boy Scouts of America, and the Girl Scouts of Eastern Pennsylvania.

Freyer received a B.A. from Manhattanville College, an M.A. in economic history from the University of Pennsylvania, and an M.B.A. from Boston University. She was a Woodrow Wilson Fellow in history and economics and is a CFA charterholder.

In retirement, Freyer will continue to share her gifts with the region through her service to nonprofits as well as spend time with her husband of almost 49 years, Charles; her adult children, son Alex and his wife Bria and daughter Sarah; and granddaughter, Katie.

“Judy’s commitment to service and her seemingly endless energy are an inspiration to all of us at the Board of Pensions,” Spencer said. “She is unflappable and has been a steady presence through tremendous change in the Church and the Board as well as in times of market volatility. She is going to be greatly missed.”

Spencer said the Board of Pensions will make an announcement regarding a successor in the coming months. “Judy’s knowledge and experience, and her steadfast commitment, have been essential for our Benefits Plan members,” he said. “Selecting a successor to a position such as hers is a responsibility we take very seriously, and we will carry it out with great care.”