LOUISVILLE – The letters with an individual check of $50 from Stewartsville Presbyterian Church, written out to every teaching elder in the Presbytery of Newton, came in the mail this May.

Now six months later the pastors who received a letter, and those who made the decision to give, are still talking about it in ways that get at the heart of the gift of giving.

“In the letter we made sure to include that the $50 was for the pastors to spend on themselves,” says the Rev. Stephen Choi. “It was not a pay it forward gift. It was intended to bless the person receiving it.”

After mailing out the letters and checks to 68 pastors and chaplains the combined total of the gift was $3,400. Choi says he and the congregation really didn’t think about it much, moving on to the next demands of ministry. They knew that some churches and pastors were struggling, but never anticipated the response they got.

In the next two to three weeks notes and cards from those receiving the gifts started pouring into the church’s mailbox; expressing gratitude, speaking of how the letter and the check came when they were having a bad week, or an anniversary of some sort.

One pastor even spoke about how over Memorial Day weekend he was able to splurge. Instead of the usual hot dogs and hamburgers, he got steaks for the family.

“Receiving those notes and cards was such a joy for me, and for our congregation,” says Choi. “I found myself waiting eagerly for the mail to arrive every day, so that I could open up more testimonies of how in some small way the Holy Spirit used us to bless teaching elders, pastors in our presbytery.” 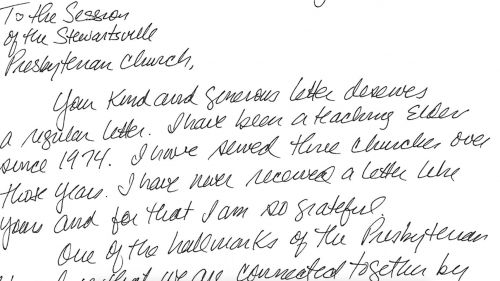 One letter in particular made a powerful impression on Choi and the Stewartsville congregation. It came from the Rev. Dr. Ed Halldorson at the Presbyterian Church of Chatham Township. He’s been in ministry for more than 40 years.

“Since 1974,” is how he began his three-page handwritten letter, “I’ve never received a gift quite like this.”

Halldorson says he found the gift “truly remarkable,” because it wasn’t a “church to church gift,” but “a church to every single pastor in the Presbytery gift.” He was “deeply touched” to have “his ministry affirmed in this way.”

Halldorson spent the $50 on a video program on biblical archeology for a Bible class he teaches. He even offered to co-teach it at Stewartsville, “as a way of saying thank-you.”

“Certainly this act as a congregation has strengthened our connections with the ministers and teaching elders in Newton Presbytery,” says Choi. “It’s opened a door for us to care a little bit more, to have a more real relationship with them.”

“I’m truly grateful,” adds Halldorson. “They reminded me again of how happy and blessed I am to be a teaching elder in the Presbyterian Church.”

To support current and for church workers and their families in times of need give to the Christmas Joy Offering, which also supports historically Presbyterian-related racial ethnic schools and colleges.