…be led forth in peace. (Isaiah 55:12). Support to the Peace & Global Witness Offering.
Make A Donation Click Here >
Home › Joint session of PMA Board and COGA engages in ‘Community Conversations’ 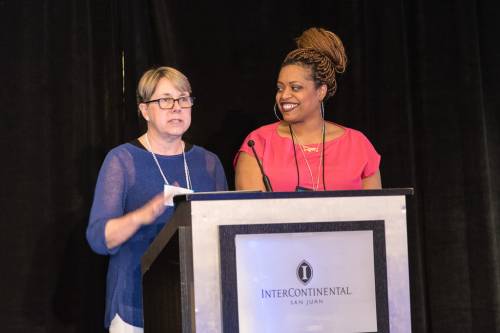 Jan Edmiston and Denise Anderson, Co-Moderators of the PC(USA) 222nd General Assembly (2016), present their report to the joint session of the PMA Board and COGA meeting in Puerto Rico. (Photo by Gregg Brekke)

SAN JUAN, Puerto Rico – Members of the Committee on the Office of the General Assembly and the Presbyterian Mission Agency Board gathered this morning in a joint session, joining staff members in a series of “Community Conversations” to discuss how the church can move forward during changing times. Among the issues discussed were cultural shifts, the decline in church membership, and faithfulness and sustainability within the church.

Before breaking out into smaller group discussions, Eliana Maxim, co-vice moderator for the Way Forward Commission, said there have been a number of “cultural shifts” that will have an impact on the church of the 21st century, including constant connectivity.

“As a person in the pew or as a preacher, the moment you mention a book, I can immediately buy it,” she said. “I can also fact-check you to see if the information you share in a class or church is accurate. Thanks to the Internet and social media, we are constantly connected.” 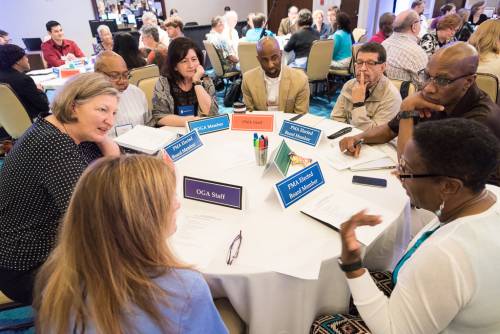 PMAB and COGA members, along with PMA and OGA staff, discuss questions from the Way Forward Commission during a joint plenary session. (Photo by Gregg Brekke)

Maxim told the group that people are more interested in being a part of the conversation, not just listening. “People want to engage in conversation,” she said. “They don’t want to be talked or lectured to, but would rather contribute to the conversation.”

Maxim also said people are more interested in collective wisdom, and get information from the grassroots level. “People also want to be involved in work that has meaning. It’s not so much monetary success, but making a difference in something they feel has meaning.”

Another part of the conversation revolved around the decline in church membership. Jo Stewart shared statistics showing the percentage of believers in the U.S. at 87 percent.

“The downward trend is more significant for younger adults, at 80 percent,” she said. “While the number of Christians declined by 7 percent, we have seen an increase in those who identify with non-Christian faith.”

Stewart said research shows a drop in mainline Protestant denominations from 18 to 14 percent over a seven-year period, while evangelical Protestants have remained stable. She added that mega-churches continue to see growth, with as much as 10 percent of the U.S. population attending. “While many of the members are connected to a denomination, the denominational ties are weak and unimportant to members. Members are younger and more racially diverse.” 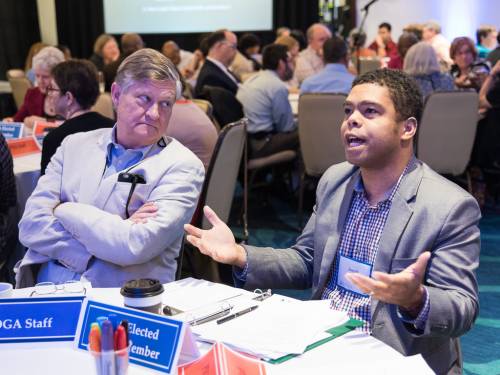 As the small groups reported to the larger gathering, several comments focused on faithfulness and sustainability.

PMA Interim Executive Director Tony De La Rosa said as the demographics change, the church should be looking for insights from those who are reaching retirement.

“That demographic bubble is looking for ways to fulfill their mission and live out their faithfulness in a way they haven’t been able to,” he said. “This is a chance for the church to reach out to this constituency as a way of empowering mission and leadership, and take advantage of time and talents that demographic segment offers.”

PMA Board member Floretta Watkins told the group that ministry is messy and the church needs to be prepared.

“Ministry is messy because we are. We sit inside a sinful system that spreads out deep and wide. We must be faithful in the midst of the storm; that determines the depth of our faith,” she said. “People aren’t going to come to church every day. People are dealing with pain, and we preach something else. Maybe we need to look at things from a different perspective and ask who are we as a church.”

Several participants, including Stated Clerk the Rev. Dr. J. Herbert Nelson, II, emphasized the need for congregations to “not worship the institution, but Jesus Christ.”