Building a Life of Faith. Support the Pentecost Offering..
Make A Donation Click Here >
Home › John Detterick, who led both the General Assembly Council and the Board of Pensions, dies at age 80

The success of the PC(USA) is not so much about numbers, he once said. It’s about ‘how well we proclaim the good news and feed the poor’ 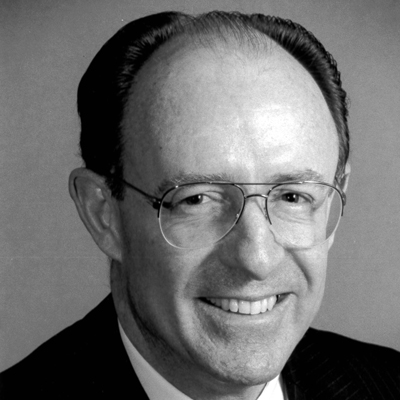 LOUISVILLE — John Detterick, who for eight years led the General Assembly Council (now the Presbyterian Mission Agency) and before that the Board of Pensions for five years, died Tuesday at age 80 at his home in Denver after a long and courageous battle with cancer. He was surrounded by his loving wife and four children.

According to those family members, he will be remembered by many for his wisdom, faith, honesty, humility, leadership and grace.

“He was a great leader for our church, and the two of us were the closest of partners in the ministry of Christ’s Church,” said the Rev. Dr. Cliff Kirkpatrick, Stated Clerk Emeritus of the Presbyterian Church (U.S.A.) and professor of World Christianity and Ecumenical Studies at Louisville Presbyterian Theological Seminary. “I give thanks to God for John Detterick for the many gifts he shared with me, with the broader church and with the Church Ecumenical.”

“While I did not know John, people have fond memories of his ministry and work,” said the Rev. Dr. Diane Moffett, president and executive director of the Presbyterian Mission Agency. “I stand on the shoulders of John and others who have served faithfully in this position. I am grateful for his gifts, not only to PMA but to BoP and throughout the denomination.”

“John came to the Board [of Pensions] after a successful career as a corporate turnaround guy,” said Jean C. Hemphill, legal counsel to the Board of Pensions and partner at Ballard Spahr LLP, who was in-house counsel for most of Detterick’s BOP tenure. That was Detterick’s culture for his first couple months on the job, according to Hemphill. “Then, he just went total church over his five years here, all the way to Louisville,” she said, laughing.

Six years ago, doctors told Detterick he had 3-6 months to live. According to his family, a close friend told him that his next journey would be determined more by his attitude than the doctors’ skills and diagnoses. “He took the advice to heart,” his family said, “and treated the next six years as an adventure to live life to the fullest and walk the path that God gave him.” His family said he “could meet with world leaders with the same ease as he did with all walks of life.”

John Judd Detterick was born on July 21, 1940, in Las Vegas, New Mexico, to Bob and Grace Betty Detterick. His family said his early years were spent roaming the mesas outside Las Vegas, playing tricks on his father and siblings and helping at his family’s dairy. As a strong-willed 12-year-old, he wanted a horse and somehow managed to find a man willing to sell him one. He purchased the horse and walked it home during one of the worst winter storms in years, surprising even his parents with his resolve.

He attended Amherst College in Massachusetts, rowing with the varsity crew for three years. During a year off from study, his life changed when he walked into a classroom at New Mexico Highlands University and met Bobbye Ann Schulze. He asked her to play golf after class and she was the love of his life from that day forward.

After college, John and Bobbye settled in Las Vegas, where John worked at a local bank. Their daughter Elizabeth was born there, and their other children — David, Jim and Mary — were born in Sarasota, Florida.

The family moved to San Marino, California, in 1981, where John became chief executive officer of a fast-growing regional bank which had just been purchased by Sears & Roebuck. The family later moved to Lake Forest, Illinois, when John became president of Sears Financial Corporation.

He changed careers in his mid-50s when he became President of the Board of Pensions of the Presbyterian Church (U.S.A.). His first item of business was to address the Medical Plan. The Board was still processing medical claims in-house when Detterick arrived, and not quickly enough. Meanwhile, groups like health maintenance organizations were securing discounts from health systems for medical reimbursement. Detterick, along with Francis E. Maloney, the Board’s former Chief Financial Officer and Chief Operating Officer, created a turnaround plan, including outsourcing the prescription drug program and introducing a preferred provider organization and managed care controls. Along with staffing changes, this work stabilized the Medical Plan and restored service quality. 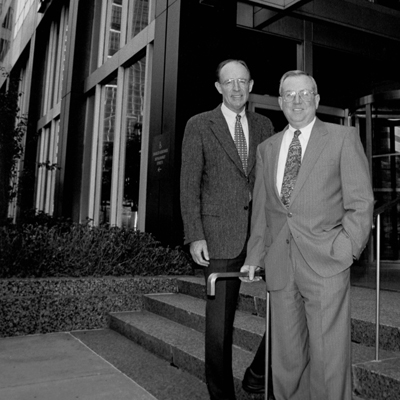 From 1993-98, John Detterick , at left, was President of the Board of Pensions. He’s shown here with Francis E. Maloney, the Board’s former Chief Financial Officer and Chief Operating Officer. (Photo courtesy of Presbyterian Historical Society)

“He really turned around the Medical Plan,” said Hemphill, “and improved the image of the Board in the Church.”

Hemphill and Michael  F. Fallon Jr., the Board’s current Executive Vice President, Chief Financial Officer and Treasurer, who was the Board’s Controller during Detterick’s tenure there, recalled that on Fridays, Detterick would walk around Board headquarters in Philadelphia, chatting with staff. “He called it Board-walking,” Fallon said, a nod to the boardwalks of the nearby Jersey Shore. “John really brought the President’s office out of the corner.”

“Service was his mantra,” Fallon added. “The staff loved John,” who “sought to empower each individual, encouraging training and support for all staff.”

In 1998, Detterick was elected to be Executive Director of the General Assembly Council, where he served two four-year terms. A 1998 Presbyterian News Service article reported that Detterick had this to say to the search committee: “With every new generation the church is challenged to respect and respond to the symbols and vessels which make the unchanging gospel message relevant and alive for the next generation. The organization structure must respond also. … I believe the GAC can focus more intently on enabling and supporting the mission work of congregations and presbyteries.”

“As we enter the 21st century, Americans find their sense of community less in institutions and more in causes, more in local and individual relationships,” Detterick said. “The challenge before the Presbyterian Church (U.S.A.) is to enable and support the working of the Holy Spirit in ways that are more relevant to congregations and presbyteries, while nurturing the sense of community as the Presbyterian Church (U.S.A.).”

Assessing the health of the denomination “is not about number of members or churches or size of budgets,” Detterick said. “It is about how well we proclaim the good news and feed the poor.”

His family said one the greatest joys he had in his GAC work was traveling the world to visit with mission co-workers, one of which included an audience with Pope John Paul II.

“John navigated a period of many changes in the Presbyterian Church (U.S.A.) while maintaining his poise, calm and respect for others,” the family said.

In 2006, Detterick retired to the mountains outside his hometown, Las Vegas, New Mexico. He found joy in hiking, joining the local search-and-rescue chapter and spending time with Bobbye while taking in the beauty of the Sangre de Cristo Mountains. One of his favorite pastimes became scaring bears away from his bird feeders. In his “retirement” he became a lay minister, preaching in churches nestled in the mountains.

His children said he taught them that they can learn from every single person they meet and that every challenge is an opportunity to learn. After deciding not to heed his doctor’s six-month prognosis, he pursued his passions during the next six years, including photography, poetry, cooking, a cancer hiking club and travel, which enabled him to witness the births of five of his eight grandchildren.

He is survived by his wife of 58 years, Bobbye; their four children, Elizabeth Ann and her husband, Kevin Moore, John David and his wife Sonja (Smith), James Judd and his wife Andrea (Kazanjian), and Mary Lela and her husband, Thomas Derrick; eight grandchildren, John Robert, Rosemary, Lela, Ada, Zola, Sophia, Grace and Judd; and siblings Bob and his wife Michelle Detterick, and Ann Loman.

His memorial service will be held outdoors in Las Vegas, New Mexico, this spring. In lieu of flowers, donations can be given to the American Lung Association.