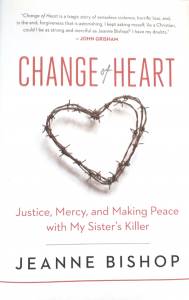 Change of Heart: Justice, Mercy and Making Peace with My Sister’s Killer by Jeanne Bishop has been named winner of the Presbyterian Writers Guild’s 2014-2015 Best First Book Award.

The award—with a $500 cash prize funded by the Presbyterian Publishing Corporation—is given at each General Assembly to the best first book by a Presbyterian writer during the previous two years. Bishop will receive her award at the Writers Guild’s General Assembly Luncheon June 23 in Portland, Ore.

Bishop’s story begins on the night before Palm Sunday in 1990 when, after returning home from dinner with family, her sister, Nancy, and husband, Richard, and their unborn child were all brutally murdered by an intruder. The book then takes the reader through a gut-wrenching but ultimately heart-warming journey as Jeanne Bishop’s life is transformed from revenge seeking to restorative justice.

The Best First Book Award judges noted: “Many of us see a violent news story and if it doesn¹t impact us personally, we move on, not considering the long-term impact that violence has on the community and the family. The author is honest about the awful actions of the man who murdered her family members, her own struggles, and the ways in which her faith pushed her beyond the usual platitudes and commitments into advocating for a new way to see and seek justice, personally as well as legally. Transformation is hard, and this story disturbs and challenges every reader’s belief systems and commitments as a Christian.” 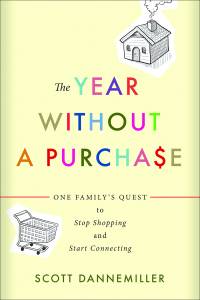 Bishop, who still lives in Winnetka, Illinois, in suburban Chicago, where her sister and family were murdered, is a member of Fourth Presbyterian Church in Chicago.

The Writers Guild’s Best First Book Award committee also awarded an Honorable Mention to Scott Dannemiller, a former PC(USA) missionary in Guatemala who now lives with his family in Franklin, Tennessee, for his first book, The Year Without a Purchase: One Family’s Quest to Stop Shopping and Start Connecting.

While acknowledging that money is important, Dannemiller writes that “preoccupation with money is a symptom of something larger lurking just beneath the surface.” Through often hilarious anecdotes, he chronicles his family’s exploration of what’s wrong with a life overly influenced by consumerism.

One judge noted: “This book is fun, funny, and faithful—sharing both the moral quandaries of consumerism in the U.S. and practical stumbling blocks for those of us seeking to live differently. I found myself laughing at the stories, finding great meaning in the insightful observations made by the author¹s children, and thinking of ways I could get out of the frantic cycle of buying stuff.”

For more about the Presbyterian Writers Guild, visit https://presbyterianwritersguild.org.