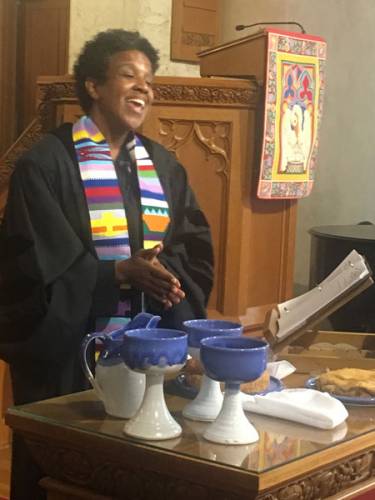 AUSTIN, Texas — During the second day of the Just Worship conference at Austin Presbyterian Theological Seminary, those gathered for the worship service were asked a poignant question by the Rev. Dr. Margaret Aymer:  “Can you breathe?”

Preaching from James 2 (verses 1-9, 14-16, 26), which deals with discrimination in the body of Christ, Aymer, professor of New Testament at Austin Seminary, built her Tuesday message around the last words of an unemployed black man born just two years after she was. Eric Garner died after selling individual cigarettes on the street.

“This father, grandfather — a mother’s child would’ve only been 49 this month,” Aymer said.

But instead, Garner died on camera, face down on the asphalt of a New York City street, saying, “I can’t breathe, I can’t breathe.”

Aymer then explained that because of stories like these, she has found herself drawn to pastoral epistles — to letters of lament and resilience for the church.

What she said she has found in letters like James’ are unexpected stories about spirit, wind and breath that might help us respond to the many stories of discrimination and injustice swirling around in our culture:

“The black woman with short hair who cannot be distinguished in the car as a female profiled on her way to church, passed by a white woman going 10 miles an hour faster than the speed limit.  An Indian man with a PhD. from UCLA waiting for the right to work in the U.S. while white Russians come en masse and birth their children here. White young men with automatic weapons who have committed mass murder, taken into custody unarmed, while non-violent brown- or black-skinned offenders end up dead.” 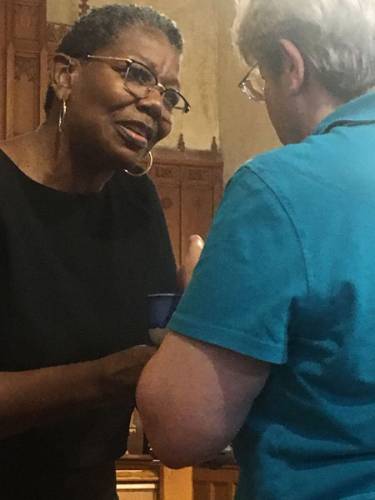 Aymer said that James is also dealing with discrimination that is unapologetically being practiced by Christians in the church.  She described a biblical election season in the Roman Palestine area featuring eager young upper-class men dressed in their best whitest toga trying to gain the support of the rank-and-file.

So James tells a hypothetical story, which goes this way, according to James 2:1-4.

Suppose, James says, you’re gathering for worship and one of these men dressed in his white toga and wearing a big gold ring walks in. At the same time, a smelly destitute person enters the building.

And suppose that upper-middle-class man is treated with deference and hospitality. He’s ushered to a seat in the center, away from the pillars, where he can see and hear.

And that smelly destitute person?

“Suppose you place him in the narthex, or perhaps under the pew,” she said.

Aymer acknowledges that the story is so hyperbolic that perhaps it evoked some chuckles of embarrassed self-recognition among the listeners.

“Suppose again,” she said, referencing James’ second story in verses 14-16, “if a brother or sister is naked and lacks daily food, and one you says to them, ‘Go in peace; keep warm and eat your fill,’ and yet you do not supply their bodily needs, what is the good of that?”

Aymer said that James could have told the story about Eric Garner. The parallels are there: Like the smelly destitute man in James’ story, no one asks Garner why he is selling illegal cigarettes or what he might need to eat or wear.

No one treats Garner as a person of honor, granting him the decency of conversation. Instead he is placed in a chokehold, begging for breath as he dies.

James is not concerned for any individual’s lack of breath, Aymer said. Instead, his concern is for the church.

“Like Eric Garner, in James’ story breathing is connected to living,” she said.

“If a church doesn’t attend to the hunger of its own member, it is gasping for breath,” Aymer said. “If it discriminates between the elite and poor — even while gathering for worship — the life is being choked out of it.”

James says the same thing in verse 26: “Just as the body without the spirit (breath) is dead, so faith without works is also dead.” 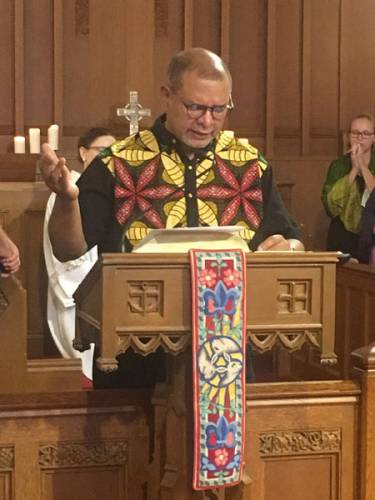 The Rev. Jorge Lockward leads prayers of the people during worship Tuesday at the Just Worship gathering in Austin, Texas. (Photo by Paul Seebeck)

Calling works “the great taboo of Reformed theology,” Aymer made it clear that for James, works are not the means of salvation.

“He is crystal clear that the faithful come into life through the father of lights,” she said, “the birth mother of the church.”

But Aymer believes that works are the breath of faith, the evidence of the inspiration of the Holy Spirit in the life of the church.

In closing she wondered how James’ story might change if it were written to the seminary community and to those people gathered at Austin Seminary for Just Worship.

Perhaps, she said, James might tell it this way”

“A quiet, upper-class white progressive Presbyterian student who speaks softly in the language of our denomination and meditates quietly comes into our worship service.

“And the a somewhat less quiet, upper-class, non-white, perhaps more conservative, maybe even non-Presbyterian, who throws up their hands and dances when the spirit catches them, or who calls her God ‘Senor’ or even ‘Mujer’ and rages about our own nation’s treatment of los imigrantes, like me, and los indocumentados, as my aunt was for years.

“If those persons come into our worship service, and we give the place of privilege and welcome to the former, and silence the latter, what does this say about us? Can we breathe?”

“Even if discrimination and ignoring the needs of others is the natural course of things in world, the church should not look like the world,” Aymer said. “For the church that resembles the world out of which it is called, rather than the God who called it forth, the church starts gasping for breath.”

“The moment the church starts justifying any violation of the commandment to love its neighbor, the church is lying on the ground with its dying breath.”

Just Worship, which concludes Wednesday,  is a cooperative effort among Austin and Johnson C. Smith seminaries, the PC(USA) Office of Theology and Worship and the Presbyterian Association of Musicians.