PORTLAND – Wise words from the pen and the pastoral heart of a respected Presbyterian writer, the Rev. Jack Haberer, greeted attendees this early morning at the General Assembly breakfast co-sponsored by Congregational Ministries Publishing (CMP) and the Presbyterian Publishing Corporation (PPC). 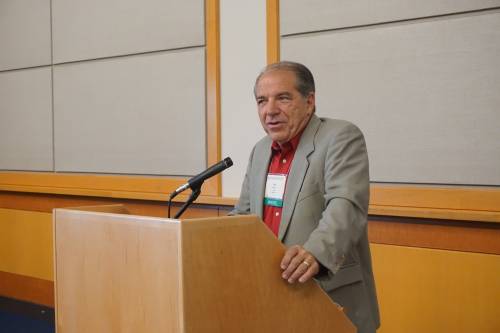 Haberer, who was introduced by David Dobson, executive director of publishing and editorial director for the PPC, shared both the genesis and the thesis of his latest book, It’s Complicated: A Guide to Faithful Decision Making.

It’s Complicated, which Dobson described as a book that helps Christians “work through the difficult times in life when the choices between good and bad are not so clear,” was published in April by the PPC’s Westminster John Knox Press.

“I’ve been asking this question for as long as you have,” began Haberer, a former editor and publisher of The Presbyterian Outlook, “How in the world do you make sense of what the Bible says about what it is you should do, when in fact sometimes it gives you mixed messages, and sometimes it doesn’t seem to even speak at all to what it is we’re trying to sort out?”

He proceeded to tell the story of Ginger—a member of the first church he served in Satellite Beach, Florida, upon his ordination in 1984—who had first introduced him “to seeing things as I do now.”

Haberer recalled having been told during worship one Sunday that Ginger had been rushed to the hospital. He later learned at the ICU that she was 90% brain dead. In the light of the Karen Ann Quinlan right-to-die controversy, Haberer said that he began to wonder—based on his study of scripture—whether in such cases as Ginger’s “a choice for death might be an ethical choice.”

His experience with Ginger, who was ultimately removed by her son from life support, eventually led him to write his new book, which is grounded in the principles of Jesus’ Great Commandment as a starting point for decision-making “in questions that don’t have a single, simple answer.”

During his talk, Haberer projected two spreadsheets showing how “love God” and “love neighbor” can be organized into aspirations, standards or benchmarks, applications, and approximations and adaptations.

“Here’s the one chart, here’s the other,” said Haberer in conclusion. “Buy the book!”

After Haberer’s address, the Rev. Laura Cheifetz, the PPC’s vice president of Church & Public Relations presented brief descriptions of some 20 new titles from the PPC. 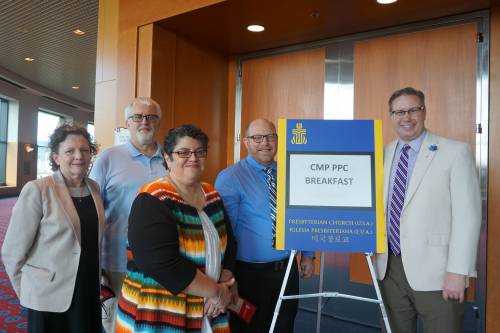 Following Cheifetz, the Rev. Dr. Charles B. “Chip” Hardwick, director of Theology, Formation, and Evangelism (TFE), began his remarks by announcing that Mark Hinds, interim publisher for CMP has been promoted to publisher.

“Mark’s work has been fantastic,” said Hardwick. “He’s done a terrific job guiding the CMP staff through the introduction and rollout of the Growing in Grace and Gratitude curriculum, and has given excellent leadership to the staff team. I hope you will join me in congratulating Mark.”

Hinds in turn introduced the newest member of the CMP staff, Malinda Spencer, associate for Curricula Training and Promotion, who “has brought gifts of spunk, tenacity, and keen insight” to her new role. Spencer described one of her tasks as the revitalization of the POINT (Presbyterians Organized in Nurture and Teaching) network, for which training will be offered at the 2017 Association of Presbyterian Church Educators (APCE) event in January in Denver.

Spencer’s remarks were followed by the showing of a video and brief presentation on Growing in Grace and Gratitude—CMP’s new curriculum available in both English and Spanish—by the Rev. Marissa Galvan-Valle, associate for resources and relationships with Hispanic/Latino constituencies for CMP.

Of the two important aspects of Reformed and Presbyterian identity paired in the phrase, “grace and gratitude,” Hinds added, “We hope it will be become an endearing and enduring mantra for the church as a whole.”

As attendees left the event, each was given a complimentary copy of Grace & Gratitude, a new study written by the Rev. Dr. Charles Wiley III for the Being Reformed: Faith Seeking Understanding series for adults. CMP’s Being Reformed also includes Race and Reconciliation, by the Rev. Dr. Clifton Kirkpatrick, a timely resource for the 222nd General Assembly (2016), which in committee on June 20 recommended that the full assembly take the final step to include the Confession of Belhar in the Book of Confessions of the PC(USA).